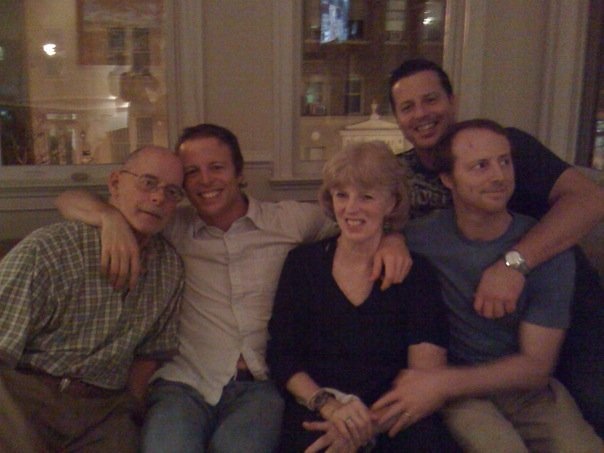 Andrew Stroud (“94) was a leading athlete during his time at RHS winning back-to-back state wrestling championships as a junior and senior and contributing to the 1992 and 1993 soccer state championships.

Stroud first took up wrestling as a way to stay in shape for the next soccer season, not expecting to be as successful as he was in the heavyweight class. Stroud was also wrestling captain in his junior and senior years, putting up a career record of 84-14, which earned him a spot on the All-Metropolitan team in 1994. Stroud finished his senior year with a perfect record of 27-0.

“[In 1994,] I expected to win [the state final match] but it was really hard,” Stroud said. “When I got to the state finals [I was] like “There’s no way I’m going to lose this.a��… It was an amazing feeling and it really felt good for my coach tooa�� so it was really cool.”

Edward Heintzelman was Stroud’s RHS wrestling coach and was an important influence to him and an incredible coach, Stroud said. Under his coaching, fellow wrestler Tim Barone was able to win the 145 lbs weight class Maryland 2A/1A state title with a record of 21-5 in his senior year (“94).

Despite his success with wrestling, Stroud said he loves soccer more, having played soccer his whole life. He grew up playing soccer with his two older brothers, John Stroud (“87) and Jeff Stroud (“89). Former midfielder John Stroud was the Washington Posts’ soccer player of the year in 1986 and was an All-Metropolitan player 1985-86 leading RHS to a 15-1 record with their only loss in the state championship game. He was also named an All-American player in his senior year and continued his soccer career playing at DI James Madison University.

Jeff Stroud was also a standout RHS athlete winning the 1989 Model Ram award and leading RHSa�� boys varsity soccer team to the 1989 Maryland Class 4A State Title.. Jeff Stroud graduated from the University of Maryland in 1993 where he scored four goals in 1991 and 10 goals in 1992 for the D1 men’s soccer team. He was also honored in the second team All-Atlantic Coast Conference in 1991-92.

As a center midfielder, Andrew Stroud was also on the All-Met first team for soccer in 1992. After graduating from RHS, Stroud received a full scholarship to the D1 Towson University to play on the men’s soccer team where he earned his Bachelor’s Degree in elementary education and teaching. By playing high-intensity sports throughout his childhood and his teenage years, Stroud learned that in order to succeed, athletes must practice as much as they can to become exceptional at the sport.

“There’s no such thing as too much training and too much preparation,” Stroud said. “Playing games against other people and just doing the game is not enough. You have to actually take on what you’re worst at and practice that until it becomes your best thing.”

Much of the Stroud brothers’ athleticism comes from their parents, Barbara Stroud and Walt Stroud. Barbara Stroud, Springfield HS (a��63) was part of the U.S. women’s national lacrosse team and was inducted into Springfield Area Educational Foundation’s Athletic Hall of Fame in 2013. She also played field hockey and lacrosse at East Stroudsburg University and is currently a teacher in MCPS. Both Walt and Barbara Stroud were co-coaches for RHS girls lacrosse about 10 years ago.

Andrew Stroud now lives in Fort Lauderdale, Florida where he is a successful senior account manager selling medical specialty sales. He no longer wrestles or plays soccer, but tries to play beach volleyball whenever he gets the chance.