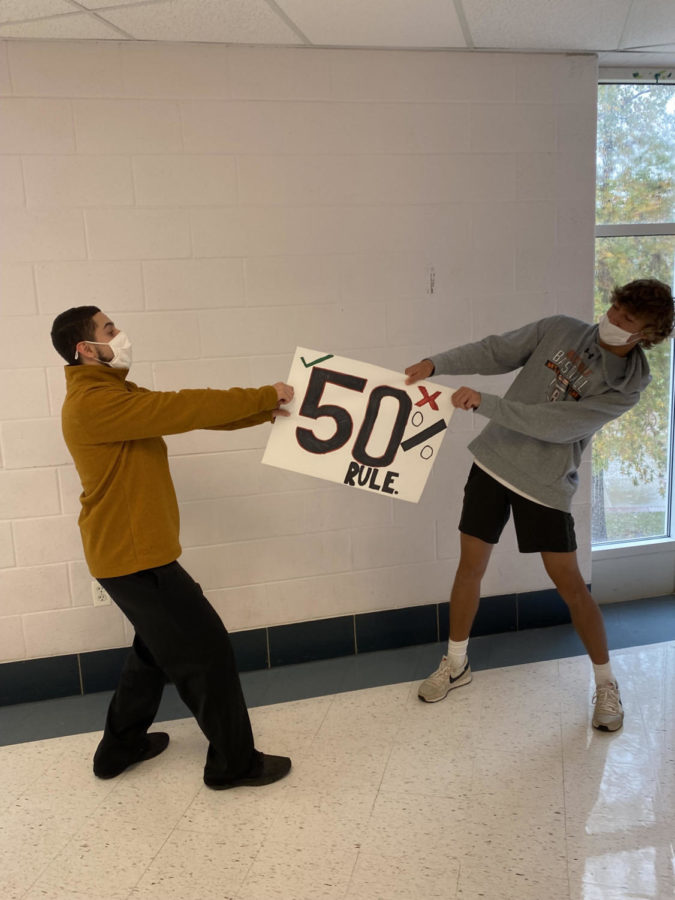 Over 15 years ago, Montgomery County Public Schools implemented the controversial “50% rule.” Many argue that this rule is abused by students and should be eliminated, but in reality, it gives them a chance to breathe and should be supported.

The MCPS grading procedure states that if one makes an attempt to complete the basic requirements of an assignment, then the assignment can not receive less than a 50%. If an attempt has not been made, the teacher is allowed to assign a 0.

Although it is a contentious rule, it allows students to bounce back from a failed assignment as it prevents grades from falling drastically. A single assignment can make or break a grade, so the 50% rule keeps grades in check.

The rule keeps students confident in their abilities. Oftentimes, the raw scores on highly weighted tests do not represent students holistically. If a student puts the utmost effort and time into a class but performs poorly, failing them undermines and discourages their hard work.

Many believe that the 50% rule causes students to put less effort into assignments, but if one were to take a look in the classroom, for a majority, this is not the case.

Take math class, for example. Imagine studying for a test for a whole week, but failing nonetheless. You then check your grades and see something less than 50%. Not only does it hurt, but it also can worsen a grade to the point of no return. Senior Nate Yetagsu is familiar with this.

“This year in AP Calc BC, I have experienced the 50% rule because I’ve failed some tests completely,” Yetagsu said. “The 50% rule has allowed me to keep [my grade] at a reachable point. I can still work on it [his grade] and allow it to get to a good point.”

The need for leniency on students has been highlighted throughout the COVID-19 pandemic. During virtual learning, many students lost drive and motivation, making assignments hard to complete. The 50% rule alleviated much of the stress that came with virtual learning and allowed students to keep striving. As we return back to school and adjust, this stress is still prevalent.

According to an announcement published by MCPS, there was a graduation rate of 86% in the district that year. The class of 2020, whose graduation rate was 89.3%, is proof that the graduation rate has increased, which may be a direct result of the help provided by the 50% rule.

Some feel that this rule is abused and can undermine work ethic, however, when given a zero it can take a students grade to the point of no return.

“I feel that to give a student a zero on an assignment can be so detrimental to a student’s grade due to the 100 point grading system.” said Advanced Placement Literature Teacher Adreinne Kelly. ”If it were in my hands I would change the scale of grading.”

The controversial “50% rule” has been around for 15 years now and there are still debates on whether or not it is fair to all students.

According to this grading policy, all students who submit work, regardless of accuracy or quality, must receive a minimum of 50% credit.  This gives students the false impression that this rule is beneficial to them. In reality, the 50% rule rewards students who show no effort and undermines student work ethic.

Since its implementation in 2006, the 50% rule has been detrimental to  many students throughout the county. It creates a bad work ethic, as many abuse the system, relying too heavily on getting their entitled 50%.

“I think [students] who don’t really show effort in school are dependent on this rule to keep their grades alive,” junior Josh Pasternak said.

Procrastination is an immense struggle amongst teens nowadays, and this rule is only adding to this dilemma. A staggering 86% of high school students say they procrastinate on assignments according to railernews.org. This policy only amplifies procrastination as many students don’t get work done, thinking the 50% is “good enough.”

Teachers also take issue with this rule. They care for their students and know this policy will lead them in the wrong direction.

“I think that it is a short-sighted policy designed to appease unreasonable parents and skew statistics at the expense of long-term academic growth and sustained success for our students,” English teacher Jessie Rutter said.

As students continue throughout college and their career paths, they can’t have this “put it off” mindset the 50% rule promotes. For example, in the professional world, if one chooses to not work, they can’t expect to still get 50% of their paycheck. Unfortunately, the 50% rule instills this delusion of entitlement in thousands of students’ heads.

Not only in a career path can this rule set you up for failure, but in college as well. Most colleges throughout the country do not have a rule of such sorts, many may be rudely awakened by this unexpected change. It also gives colleges a false representation of a student’s work ethic. Colleges may receive an impressive transcript, but not the contradicting reality: heaps of pushed-off assignments and a developed apathy towards learning.This rule allows for these indolent acts to continue throughout our county daily.

The unethical nature of this rule makes students who do put in the effort to feel cheated. Seeing peers who don’t put in the same effort reap the benefits of this policy and get the same grades, leads diligent students to think, “What’s the point of putting in all this effort?”

“I think that many may resent this rule as it lowers the gap between them and ‘failing students,’” Pasternak said. “It doesn’t do justice to the amount of work they are putting in.”

This absurd policy does our students a great disservice as it lowers work ethic, inadequately prepares them for the future, and unfairly rewards academic laziness in students throughout the county.