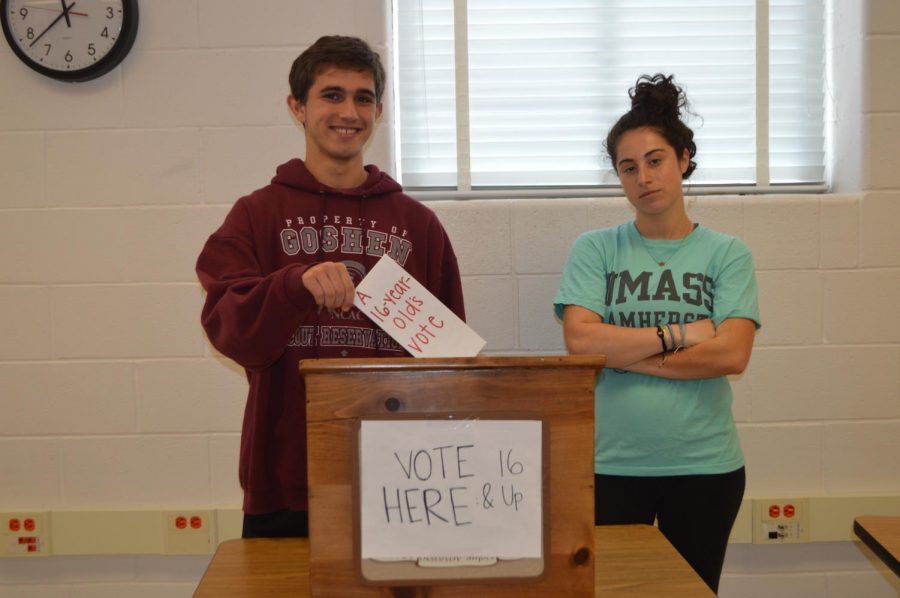 Following last year’s shooting at Marjory Stoneman Douglas High School, youth activism surged throughout the country. And while high school students struggle to be heard, they are deprived of the most fundamental instrument needed to create change: the right to vote.

The United States should lower the voting age to 16 because it will make federal, state and local government more ideologically representative of the country, giving young people a say in issues that affect them most.

Historically, expanding voting rights has created an increasingly diverse legislature. When the 15th Amendment was passed, granting the right to vote to African Americans, Congress became accountable to that population and the problems that affected them. Better representation and further accountability also followed in the footsteps of women and 18 year olds gaining the right to vote.

Sixteen year olds can pay taxes, drive cars and at times be prosecuted as adults in the criminal justice system. Given how ineffective Congress has been at representing the opinions of America’s youth, students should be able to choose the leaders who govern these issues.

Congress’s voting reflects this demographic discrepancy. Issues that Generation Z believes are most important such as climate change, public school quality and increasing ethnic diversity are liberal leaning and predominantly affect younger Americans. These issues have gone unaddressed by the older, more conservative Congress. Lowering the voting age to 16 would undoubtedly help remedy this discrepancy and allow Generation Z to have their voices heard.

Opponents of the suggested amendments to HR1 in Congress, which proposed lowering the voting age, point to the fact that the youngest section of eligible voters has the lowest voter turnout according to an analysis of 2016 voting data by National Public Radio. This is indicative of apathy and political disengagement among youth.

Congress should expand voting rights to 16 year olds. It is essential to holding leaders accountable to the issues of the future and will lead to lawmakers who are more representative of their constituents.

New legislation introduced to Congress by Rep. Ayanna Pressley (D-MA) in March 2019, proposing to lower the voting age in federal elections to 16 years old, needs to be rethought and redrafted as 16-year-olds are too young to be going to the polls. The voting age should not be lowered, rather energy should be invested into increasing voter turnout rather than increasing voter populations.

The teenage brain is fairly underdeveloped at 16 years old and continues to develop until the age of 25, forming neural connections and developing neuroplasticity, neuron transmissions and more efficient brain pathways.

For this very reason, teenagers simply are not developed enough to always think logically and reasonably.

Furthermore, historically, younger voters have the lowest voter turnout rates; therefore it needs to be considered whether it is worth lowering the age even further.

Teenagers are often preoccupied and overwhelmed with their own lives with sports, clubs, schoolwork and socializing. Teenagers are unlikely to even go to the polls nor increase voter rates.

Teenagers, furthermore, are often less cognizant of local and national issues. This is not to say they are ignorant or uncaring, but rather not as involved and informed.

A report on American teens’ knowledge of climate change conducted by the Yale Program on Climate Change Communication found that only 25 percent of teens successfully “passed” (received an A, B, or C), meaning they understood the causes and implications of global warming as well as how the climate system works.

This demonstrates how teens lack in-depth and effective knowledge on a key issue and campaign point, which is so often debated by politicians. If teens do not have an accurate view of certain important issues, it is unlikely they can understand the potential solutions or policies possible to address them.

While it is important to acknowledge that today’s teens are steadily becoming more involved in activism and politics, and starting to assert their power through protest, protesting on issues demonstrates passion yet does not always translate to knowledge on the issues. Allowing a few more years for that passion to develop into a better understanding of how policies may affect someone is needed.