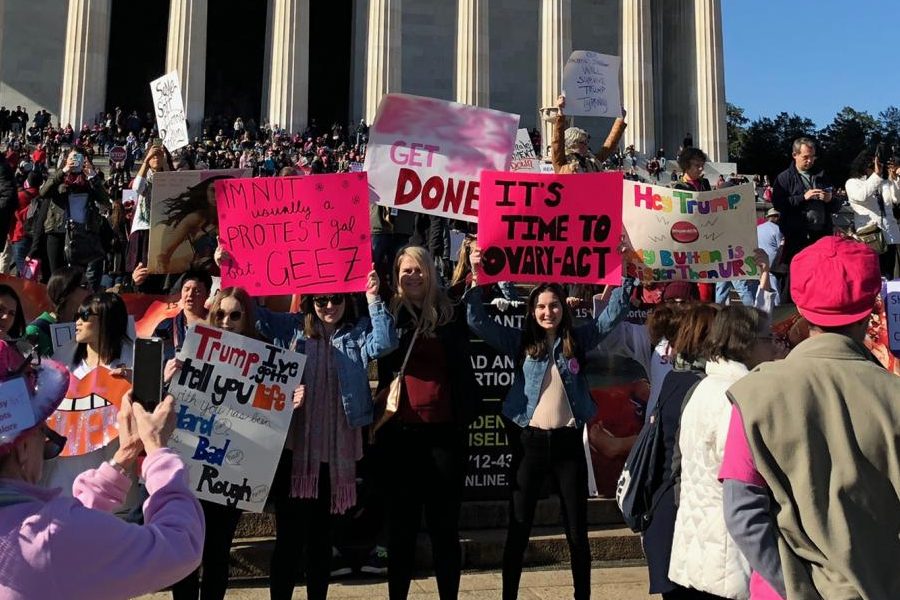 In March of this year, a list of 18 girl’s names circulated the International Baccalaureate Diploma Programme at Bethesda-Chevy Chase High School (B-CC). Alongside each name was a ranking of the girl listed, rating her on a 10-point scale based on her looks. “Scores” ranged from 5.5 to 9.4, some including numbers with decimal points to the hundredth place. The list was created by a group of male students a year prior, but recirculated just recently, according to a March 26 Washington Post article. The girls were urged by an administrator to keep quiet about the list at school, but feeling objectified, violated and betrayed, they rallied and demanded the school respond appropriately, according to a March 26 Washington Post article.

“It was the last straw, for us girls, of this ‘boys will be boys’ culture,” B-CC senior and victim of the list Yasmin Behbehani said in the same article. “We’re the generation that is going to make a change.”

While the ordeal came as a shock to many, especially in the #Metoo era, it wasn’t an isolated incident. Informal “lists” exist everywhere and are normalized by the misogynistic culture that young women are constantly subjected to, especially in high school.

Misogyny is defined as contempt for or ingrained prejudice against women, according to the Oxford Dictionary. This culture in the U.S. is not new, as various aspects of prejudice against and suppression of women have been exemplified throughout history and continue through present day.

Since Colonial America and through the 1950s, the traditional role of women was to stay at home, take care of the family and cook meals. Women were viewed as sensitive caregivers and objects to be protected.  But over time, the role of women in society has grown far beyond domestic responsibilities.

Many women have broken these social norms and played major roles in pushing the boundaries of science, politics and education. For example, the first female Nobel Peace Prize winner Jane Addams in 1931 all the way to Hillary Clinton who was the 67th Secretary of State and first female presidential nominee of a major U.S. political party in 2016.

Despite so many gains, misogyny still lingers in this country and is prevalent in schools today, even in the most elite high schools, with the most recent example being Christine Blasey Ford and her allegations against Supreme Court Justice Brett Kavanaugh, according to a Sept. 25, 2018 Atlantic article.

“Misogyny is ubiquitous,” according to the Atlantic article. “It is deeply entrenched in these school communities, and yet many young men can’t see the water they’re swimming in for what it is. They seem to have no understanding of the harm this culture of misogyny causes.”

While the Kavanaugh, Blasey case occurred in the ‘80s, this misogynistic culture spills into modern day and continues to manifest at a young age in high schools all over the country.

“So in layman’s terms I would say that it kind of engraves this idea that women have a place,” junior Redeat Sileshi said. “Your place is not to speak to admin, it’s not to cause an uproar, it’s kind of to accept it and like, you know just be quiet with it.”

Misogyny in the Workplace and Politics

The maltreatment of women doesn’t only manifest itself in the physical assault or harassment that many associate it with; it is also the internal prejudices that have been perpetuated by some of today’s leaders, strengthening the culture of misogyny that exists, particularly at work and in politics.

Misogyny is externalized when men assume women are meant to act as housewives, not as the corporate leaders or businesswomen that many aspire to be. It’s the comments about a lack of capability, the conviction that women are only good for their bodies or that they must act particularly feminine; these presumptions that women hear throughout their lives.

Despite data revealing that start-up companies in Silicon Valley with at least one female founder outperformed all-male teams by 63 percent, only 10 percent of founders are women, according to a 2016 Harvard Business Review article. Even though women have proven they are just as capable, sometimes even more so than men, they’re still the minority in the corporate world.

And, almost half of all working women in the U.S., 42 percent, report having faced discrimination on the job on the basis of their gender. Reported experiences ranged from earning less than male counterparts for doing the same job to being passed over for important assignments, according to a 2017 analysis of Pew Research Center survey data.

Along with the workplace, misogyny becomes particularly prevalent in politics. The government, which regulates some matters that only pertain to women such as birth control and abortion, is disproportionately led by men. In 2018, women made up just 20.6 percent of Congress, according to the Center for American Women and Politics. While 50.8 percent of the U.S. population is female, only a fifth of the legislative branch of the government is, and, there has never been a women as president.

President Donald Trump has made controversial comments that date from the early ‘90s to his recent 2016 campaign that have been labeled sexist and misogynistic on numerous occasions. During a 1994 ABC News interview, Trump spoke about his mixed feelings toward his ex-wife, Marla Maples, working outside their home.

Having leaders who openly treat women poorly and face no repercussions sets a precedent for the rest of the country.

“Even more dangerously, it tells men and boys the same thing: That women are disposable objects, useful for sex and childbearing but not human beings deserving of respect and dignity, let alone power,” Time Magazine writer Jill Filipovic said in a Dec. 5, 2017 article about Trump’s comments towards women.

This culture of misogyny has a history in high schools and continues to flourish in present day schools. Teenage boys develop many of the same presumptions as their adult counterparts, namely that women are weaker, need to be protected and are physical objects who are supposed to act a certain way. In turn, boys begin at a young age participating and perpetuating this toxic culture.

In high school, girls are subject to all sorts of misogyny, ranging from smaller issues such as school dress codes disproportionately affecting females to the most severe instances like sexual harassment.

While older men are usually seen as the perpetrators of misogyny, high-school-age boys play a large part in keeping the culture alive.

“We have this image of these old, predatory, powerful monsters. They totally exist, but they didn’t start out that way. They started in adolescence. We are seeing this reluctance to face up to the fact that young men, even boys, can do the damage of their much older counterparts,” said Kate Manne, philosophy professor at Cornell University, in a Vox interview.

MCPS and RHS are no exception.

“You get sexually harassed, you get cat-called, you experience all these terrible, terrible things and it’s like be quiet, hold it in. [It] engraves the idea that hey, this is what the rest of your life is going to be projected as: in your professional settings, [and] with your friends,” Sileshi said.

One of the most prevalent forms of misogyny in high school is objectification. The B-CC list reveals that girls’ worth in many boys’ eyes is often determined by physical appearance.

“[Girls] are treated as possible girlfriends, dates, another ‘knotch-on-the-belt’ and others are called sluts for sharing themselves with the wrong people,” freshman Andre Kessel said.

Objectifying women often goes unchallenged as it’s dismissed as youthful indiscretion and justified as “boys will be boys”–or dismissed, by even the head of state, as “locker room talk.” And when boys are called out, they’re often penalized to a minimal extent.

In the case of the B-CC incident, just one boy was initially punished with an in-school detention for one day, which would not show up on his record, according to the Washington Post article. Without adequate consequences, victims are led to believe that whatever they’ve faced isn’t serious or that there is nothing they can do to make change. When girls are in high school they’re young and impressionable, whatever is done, or isn’t done, in adolescence sets the tone for the future.

Women began fighting this historical patriarchy through various methods including finding work in factories and noncombatant jobs during wartime. Another historical method was organizing political structures such as the Seneca Falls Convention which was the first women’s rights convention that discussed the social condition and rights of women.

More recently, teens have joined the fight against misogyny by making their voices heard and joining protests. Lists similar to the one at B-CC have been circulating for generations whether it be informal through word of mouth, or as forward as it was in this particular situation. As the list became more known in the MCPS school, the girls on the list felt violated and objectified by their peers they considered as friends–and so they spoke out.

Dozens of seniors girls had enough of the “boys will be boys” culture and confronted school administration. When the administration’s response was deemed insufficient, about 40 senior girls filled an assistant principal’s office as one girl, Nicky Schmidt, read a statement.

“We want to know what the school is doing to ensure our safety and security,” Schmidt said. “We should be able to learn in an environment without the constant presence of objectification and misogyny.”

A meeting was then scheduled that week on International Women’s Day with about 80 students–most of the IB program–and several girls then delivered personal and impassioned speeches describing their personal experiences with sexual abuse, harassment and objectification, as reported in the Washington Post. Although scheduled for a 45-minute period, the meeting lasted two and a half hours.

Currently if students experience or witness inappropriate behavior in MCPS, they have the option to report it to a trusted staff member in the building. These reports will then follow MCPS protocol of bullying and harassment and students are able to speak with counselors if needed. However, some think that this protocol is not enough and insufficiently prevents the misogynistic culture that students fall victim to.

“The thing is is that we don’t have conversations about it at all,” Sileshi said. “You know, maybe students don’t feel comfortable speaking up, but that’s… it’s a 50/50, students play a role, admin plays a role.When they’re just flipping through the slides, kind of handing out the papers, doing everything so nonchalantly, they don’t set the tone of this is a serious conversation.”

On a national level of combating female objectification and inequality, Jan. 21, 2017, the day after the inauguration of President Trump, stands out by marking the first annual Women’s March in D.C. which is the largest single-day protest in U.S. history.

“I think it’s really empowering to see a bunch of people fight for the same cause and I think it’s nice to see such a wide variety of people support the cause and shed light on these issues so hopefully there will be a change,” Suthard said.

The march rapidly gained support as there was a total of 653 sister marches in the United States with approximately three million marchers in the U.S. in 2017, according to the Women’s March website. In this modern era of fighting for change, many teens participated in the march.

“My daughter went with me [to the Women’s March] and she felt really empowered. In terms of young people, I think it’s seeing that it’s worth speaking up, that it’s worth calling out misogyny when you see it and that’s how change happens- by demanding it,” English teacher Anne Ehlers said.