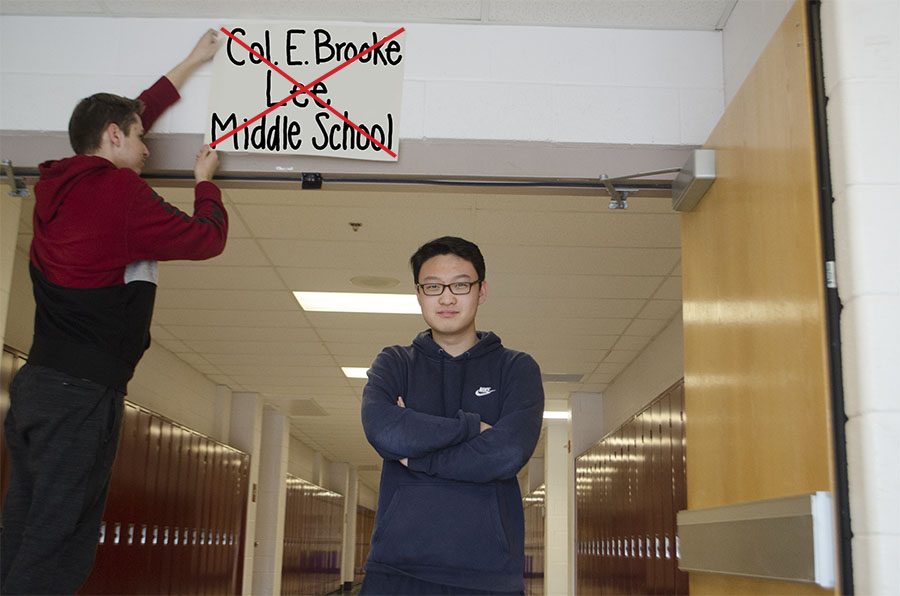 The Rampage considers whether schools should change the names of schools when the name is tied to someone with a controversial past. In many cases nationally names have been changed because of relation to the Confederacy or racism.

Pro/Con: Should School Systems Change the Names of Controversial Schools?

In light of new national attention to insensitize school names, MCPS is making the right decision for its students by reviewing all school names and considering renaming any they deem to be named after Confederate leaders or racist historical figures.

Schools in MCPS named after Confederates or racists should change their names to be more appropriate and representative of the diverse student body they serve in 2019.

Most of the schools still named after racist leaders were built from 1950-70, when racism and segregation were widespread, according to a June 2018 History.com article. Fifty years later demographics and popular attitudes have dramatically changed. Schools named after Confederate leaders or racists who fought for slavery and segregation do not represent the students and teachers who attend them.

In Montgomery County, Col. E. Brooke Lee Middle is a majority minority school with 60 percent of the students being Hispanic, 25.8 percent black and less than five percent white, according to a Feb. 6 article from Bethesda Magazine. While Col. E. Brooke Lee did help Montgomery County in many ways during his time as the governor of Maryland, including bringing water and electricity to certain areas, he also tried to segregate blacks and whites by refusing to sell land to those of African descent. MCPS is doing right by strongly considering renaming the school.

The name of a school is much more than just a sign above the entrance. Names are important to first impressions, and it is unfair to students and staff in schools with diverse and accepting communities in MCPS–or any school system–to have multiple schools named after racists and slave owners. It’s a selective argument to say that the good things some people have done make up for being racist. It is important to look at a person’s life with full context, but when it comes to racist comments or owning slaves, a larger pattern of thought and behavior is established.  MCPS shouldn’t just praise the good and ignore the bad.

J.E.B. Stuart High School in Fairfax, Va. named after a Confederate General showed the importance of a name after it gained celebrity attention. The school was renamed after Thurgood Marshall, following actress Julianne Moore and producer Bruce Cohen, both J.E.B. Stuart graduates, and many of the students started a Change.Org petition to make the name more representative, according to a May 2017 Patch article.

A major problem with renaming schools is the large cost. Name changes have cost more than $1 million dollars due to items with school logos that must be changed. Regardless of the price, students are passionate about this issue and have shown change is needed. Last year at the University of North Carolina at Chapel Hill, students tore down a Confederate statue after the system board refused to take action.

U.S. school systems and MCPS specifically should change these schools’ names. Currently, schools are waiting for students to speak up and demand change when they should be taking the initiative by renaming schools beforehand and MCPS should reevaluate their current naming procedure to guarantee that names are more representative of the changing demographics.

It is unfair to have students attend schools with offensive names that do not represent who they are. As MCPS revisits these school names, students will soon find out if the system is willing to take action.

Over the past few years, a progressive movement dedicated to renaming statues, schools and other public places originally named after racist leaders of the past has risen to prominence. Many people, including Montgomery County Council President Nancy Navarro, want these schools renamed. However, their names should not be changed because we must learn from the painful lessons of history and renaming schools can become a slippery slope when every slaveholder needs to be questioned, potentially one day including the likes of George Washington or Thomas Jefferson.

The names of all schools in Montgomery County will soon be reviewed to “ensure they are appropriate,” according to a Feb. 26 Bethesda Magazine article. However, by changing the names of any schools, MCPS would be encouraging people to forget valuable lessons that can be learned from these historical figures.

Speaking about Confederate monuments, John Daniel Davidson of The Federalist, an online political magazine, said that though their original purpose was to venerate Confederate heroes like Robert E. Lee. Removing these monuments would undermine their modern-day de facto purpose of serving as a haunting and cautionary tale to the current generation. Similarly, if schools named after these figures of the past were to be renamed, MCPS would just be encouraging its students to erase the ugly parts of history, such as slavery and the Civil War, instead of providing students with important learning moments. Furthermore the school system should invest their energy and resources into various academic improvements, not panels to consider renaming schools.

People often forget that certain important founding fathers were slave owners themselves. George Washington, Thomas Jefferson, Benjamin Franklin, John Hancock and John Jay all owned slaves for all or part of their lives, among other founding fathers, according to a 2016 Encyclopedia Britannica article. Will it someday be unacceptable to name schools after founding fathers or other important historical figures for public schools? And how far are people willing to go to erase the painful details of history?

Even if the scope of the renaming were to be limited to just Montgomery County schools, there would still be three high schools (HS), namely Col. Zadok Magruder, Thomas Sprigg Wootton and Richard Montgomery HS, that would need to be renamed because each person owned slaves at some point, according to a 2018 article by The Current of Watkins Mill HS.

While it is understandable that some, including Navarro, want these schools renamed to better represent the student body of the present day, the costs of renaming large schools like Magruder, Wootton and Richard Montgomery HS would be enormous. If these schools were to be renamed, millions of dollars worth of school property and merchandise would have to be rebranded to adjust to the new name.

Instead all of that money should go toward more important things, such as investing in security, curriculum or classroom improvements and reducing class sizes, among many other important things. Improving education should not include whitewashing history when so much effort is being put forward to teach it in the same schools that may be renamed.