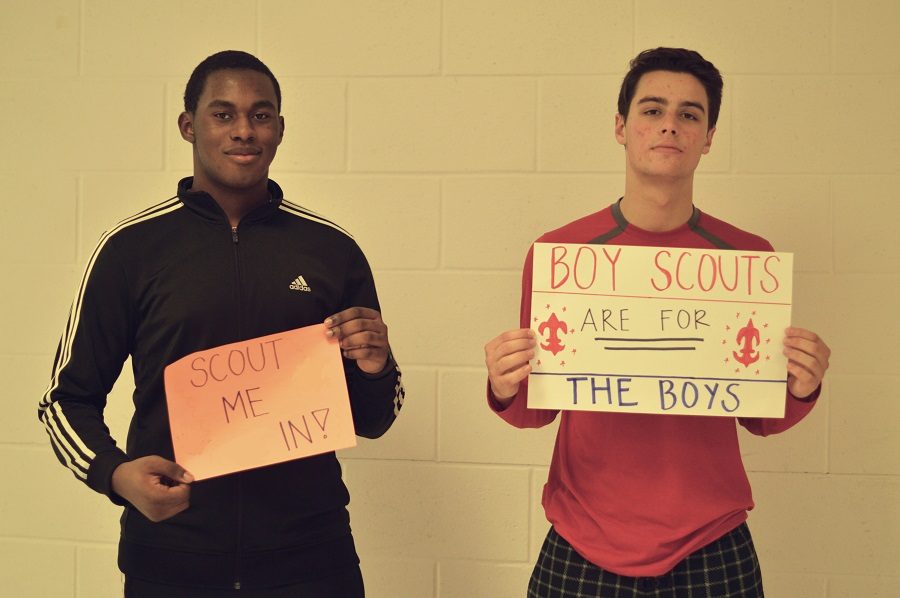 With the recent changes made by the Boys Scouts of America–including girls in the program– a debate has risen both nationally and locally on whether the move was positive or negative.

Pro/Con: Should Girls be Allowed in Boy Scouts?

The Boy Scouts of America (BSA) and the Girl Scouts of the United States of America are among the most popular scout organizations in the country. The BSA should be applauded for their recent change to accept girls into its program and continue to accept them because it supplies benefits for society while creating equal opportunity for girls.

The organization announced Oct. 11, 2017 that they would allow girls to join their flagship program which will be referred to as Scouts BSA starting in 2019. This move is a part of BSA’s attempt to be more inclusive, according to a press release by Chief Scout Executive Michael Surbaugh.

The inclusion of girls is the latest move in a positive trend of inclusivity by the organization. Openly gay scouts were allowed to join in 2014 and were permitted to be scout leaders in 2015. In 2017, transgender people were allowed to become members. This pattern sends a positive message to youth in this country. And by being more inclusive the boy scouts may increase their dwindling rate of membership. The GSA tries to frame this like a bad thing, but the BSA is a staple of american culture and by increasing membership they will be preserving the scouts, as well as expanding who can reap the benefits of their program.

The Girl Scouts does not offer the same opportunities and prestige as the BSA. The highest rank in the BSA is the title of Eagle Scout, which only 4 percent of scouts obtain. The rigorous process to become an Eagle Scout, which includes earning 21 merit badges, submitting letters of recommendation and being active in the troop for at least six months after earning the Life Scout badge, helps build the enormous prestige. The equivalent for Girl Scouts, the Gold Award, is less known and often considered less prestigious than the Eagle Scout badge.

Officials from the Girl Scouts of the United States issued a scathing critique of the BSA for not creating programs that are directly designed for girls. Instead by having “boy” in the title, the Girl Scouts argue, will force female members to “give up part of their identity.” But girls who are not interested in the BSA can still join other organization, including those with girls exclusively.

The Boy Scouts of America organization is creating more equality between boys and girls by introducing co-ed programs. These coed programs will allow girls to have more prestigious alternatives when considering which organizations they wish to be associated with. There is nothing to lose from moving in a direction where opportunities are available to everyone.

It’s going to be harder for the boys to be boys in the Boy Scouts of America (BSA) beginning February 2019 when the BSA will change their name to “Scouts BSA” as they allow girls to join packs.

The Boy Scouts should remain Boy Scouts and continue as a single gender group.

While the Boy Scouts are trying to be inclusive, it is really only a response to a cry from

the media to be more politically correct (PC). In the past, the Boy Scouts have had controversies including harassment from scout leaders and an ill-defined policy on LGBT scout members. Until 2014, avowed LGBT members were prohibited from being in the Boy scouts, according to a 2013 New York Times article.

“I think there were a few kids that identified as LGBT, but we had a don’t ask don’t tell system,” senior Eagle Scout Henry Jones said.

Beyond these controversies, having bonding experiences with people of the same gender improve childhood development. Female primates are much better at forming social bonds than males, according to a Proceeding of the National Academy of Sciences of the United States of America (PNAS). The PNAS study also highlighted that these relationships are similar to those of humans. Males also have increased physiological stress when in groups of males and females compared to groups of just males. Boys need time to socialize exclusively with other males, so that they can form friendships that are beneficial for them biologically.

The Girl Scouts of the USA have been big critics of the change.

“The Boy Scouts’ house is on fire. Instead of addressing systemic issues of continuing sexual assault, financial mismanagement and deficient programming, BSA’s senior management wants to add an accelerant to the house fire by recruiting girls,” Girl Scouts of the USA told ABC News Oct. 12, 2017.

“The girl scouts have a gold award which is supposed to hold the same value as Eagle Scout but it doesn’t. Eagle Scout is a lot more prestigious and nobody knows about Girl Scouts’ top award,” Girl Scout Anna Adhikari said.  “There needs to be something equivalent, and it affects things like college apps because they all know Eagle Scout but not everyone knows the Girl Scout’s top award.”

While Girl Scouts are known for selling cookies, Boy Scouts are known for their adventure trips, team building exercises and physical activities. One solution that has been created is the Adventure Scouts, a coed scout troop that focuses on outdoor activities. Girls deserve the right to take place in more traditional boy scout activities, but changing the Boy scouts to do so isn’t the answer.

Instead of getting hung up on the PC side of this issue, the Girl Scouts need to implement their own system of outdoor and physical activity into their program, and not force the BSA to  take on the burden.