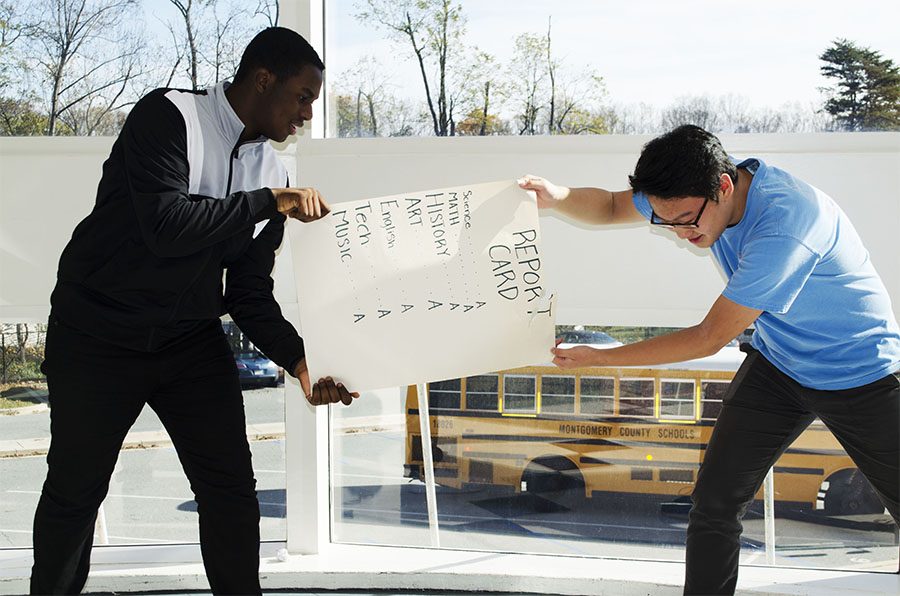 In light of a Sept. 22 article in the Washington Post about possible grade inflation, critics have voiced concerns that the Montgomery County Public Schools’ (MCPS) Board of Education’s (BOE) 2015 grading policy decreases the value of high letter grades by causing grade inflation. The county should maintain that policy, as grade inflation does not necessarily harm students.

In 2015, the BOE voted unanimously to remove final exams and create a more lenient grading system. The standardized tests were removed and students were left taking only the county-created shorter “quarterly assessments” in select classes. Taking fewer assessments–ones that many students found pointless–is a benefit to students since they can spend more time learning and less time testing.

In addition to the removal of finals, a more flexible grading system was implemented.  Now, if a student receives an A in a class and gets a B the next quarter, their semester grade will still be an A.  This was not the case prior to the update, as semester grades used to be determined based upon the quarterly trend that grades followed. The new policy has led to a 16 percent increase in the number of As given between 2015 and the current school year in math classes, according to the Sept. 22 article from the Washington Post.

Concerns are rising throughout the county that college admissions officers will view the removal of final exams and new grading system as a sign that MCPS’ rigor and expectations are lower, in turn harming students’ competitive edge when applying to colleges.

However, this phenomenon, commonly known as grade inflation, is only one part of the overall admissions process, minimizing its overall effects. Top Ivy League colleges like Harvard University look at candidates holistically, as seen in the recent court case dissecting Harvard’s admissions process. Admissions officers there want to know a student’s growth potential, character and what they can contribute, according to the Harvard admissions website. Most colleges also compare students’ grade point averages (GPAs) to their standardized test scores and compare students to their peers.

While there is validity to critics’ views that students may struggle with final exams since they no longer take them in high school, there is also an important point being ignored: students still have to take and do well on a standardized test. Furthermore, even if people feel this grade inflation could harm student’s acquisition of knowledge, they are forgetting there is no fooling a standardized test. A student’s knowledge will be tested on ACTs, SATs, and Advanced Placement and International Baccalaureate final exams. There is no soft grading policy when it comes to those tests.

MCPS continues to offer one of the most rigorous curriculums in the country. It is widely recognized as an educational system that creates curriculums that stimulate students, according to a curriculum review Johns Hopkins School of Education conducted in March 2018.

“MCPS has a longstanding history of designing and implementing instructional materials that challenge students, empowers educators, and narrows achievement gaps,” according to the Johns Hopkins review.

The policy implemented in 2015 likely caused some grade inflation; however, its effects are limited and students do have opportunities that will help them prepare themselves for a university. Now, instead of overtesting students, teachers can focus more attention on teaching students material. Then instead of those students taking exams which vary from school to school, all students will still have to demonstrate their knowledge on tried and tested exams created by the College Board and the International Baccalaureate foundation.

Grades are an integral part of school that most high school students take seriously. When Montgomery County Public Schools’ (MCPS) new, more lenient grading policy was introduced in 2015, many students rejoiced at the idea that an A semester grade would be much easier to obtain than before. However, this is not necessarily good news. The grading policy should revert to its more balanced approach because this new policy leads to grade inflation, which in turn may give students a false sense of proficiency in a certain subject.

Under MCPS’ new grading policy that came into effect during the 2014-15 school year, a semester grade of an A is obtainable if a student earns an A in both quarters of the semester or an A first quarter and a B second quarter and vice versa. This was not possible under the old grading system, in which students’ semester grades were determined based upon the quarterly trend—for example, if a student earned an A first quarter and a B second quarter, the semester grade would be a B. Additionally, final exam grades were factored in. However, under the new policy, final exams were completely eliminated in favor of fewer assessments.

New data released in September shows a large increase in the number of A semester grades across MCPS, which is particularly pronounced in math classes—from the 2015-16 school year to the 2017-18 school year, the percentage of As in all math classes doubled from 16 to 32 percent. This, however, is not necessarily a sign that students are learning the material. The rigor of math classes has dropped since the removal of final exams under the new grading policy, math department head Marcus Wiggins said.

Some students are likely achieving As in classes that they previously could not have gotten an A in. Factor in the removal of final exams, and many students may be coming out of those classes with a false sense of achievement and proficiency that may come back to haunt them in higher-level classes.

More troubling, however, is the thought that students’ work ethic in college and beyond may be damaged by the relative ease of getting an A as a semester grade. When evaluating applications, colleges usually look at semester grades and only use quarterly grades as “puzzle pieces” to help them discern patterns and trends in students’ academics, according to college admissions counseling company College Confidential. Some students earn a desirable grade for the first quarter, then slack off second quarter, as their semester grade would not be impacted if they get one letter grade lower than the previous quarter. This can be damaging to those students’ work ethic in the future because they will grow accustomed to the cycle of working hard first quarter, then slacking second quarter.

Though students may prefer the easier approach to scoring As as semester grades, they will still run into final exams in college, as the large majority of colleges still employ final exams in all of their classes. Preparing students for this experience while still in high school would be beneficial as they would learn strategies and timing for taking finals that they could use for future college-level exams.

In the immediate future, more As sounds great to any student.  But under closer consideration, the costs far outweigh the benefits.