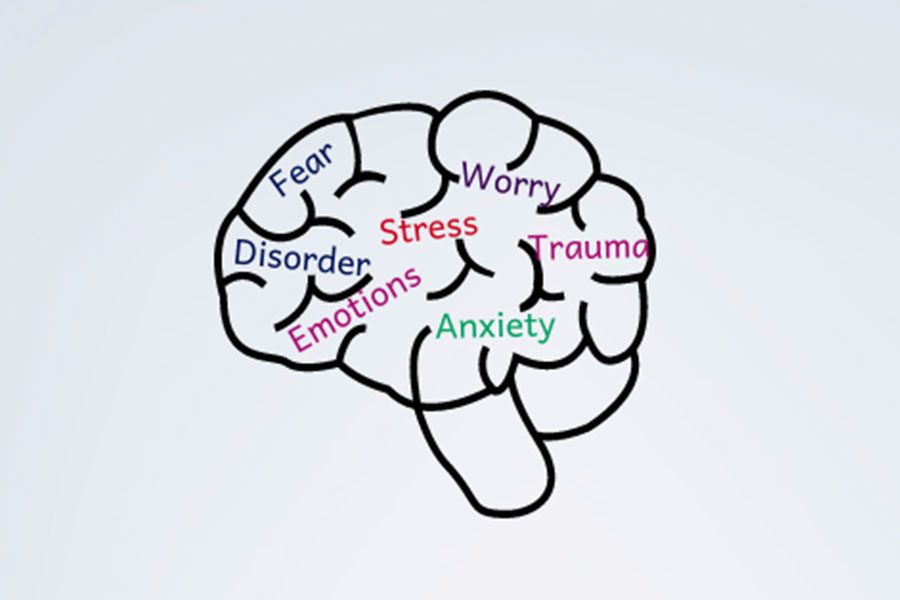 “I suffered emotionally, because sort of all these different parts of my life weren’t going so well, it was to the point where I was throwing tantrums because I didn’t want to go in to school,” sophomore Ellie Schwartz said.

Schwartz, along with 25 percent of other American children ages 13-18, as well as 40 percent of adults according to the Anxiety and Depression Association of America, suffers from anxiety, as well as depression. After struggling with anxiety and depression in middle school, Schwartz now receives accomodations at school, such as extended time on tests and two study hall periods each day.

“My anxiety a lot of the time gets in the way of me starting and doing work, as well as I have a kind of processing disorder, so it takes me longer to do things,” Schwartz said. “I think that there has been support for the school aspect of it, and I have been able to succeed with the accommodations that I have.”

Accommodations like these are not the norm, however. Only 20 percent of children suffering from anxiety actually receive treatment, according to the 2015 Child Mind Institute Children’s Mental Health Report. This could be due to the similarities between experiencing stress, which is a natural and necessary human response, and having an anxiety disorder, which can be debilitating at its most extreme form.

“Stress is a reaction to a real or imagined danger,” health teacher Katie Gross said. “I think that [anxiety] is a buildup of stress, and not knowing how to cope or deal with it.”

There are many different disorders that fall under the classification of anxiety, including Generalized Anxiety Disorder (GAD), social anxiety, Post-Traumatic Stress Disorder (PTSD), Obsessive-Compulsive Disorder (OCD), panic disorder, agoraphobia and other specific phobias.

The most common form is GAD, which affects 6.8 million adults in the U.S., according to the Anxiety and Depression Association of America. Since anxiety is the most common disorder, those who suffer from it are often susceptible to other disorders like depression and substance abuse.

I know a lot of people see me as kind of a jokester, a happy go lucky guy, you look at me in the musicals or in the classroom and I’m very much like that,” Machon said, “but I do feel as if that sort of anxiety and fear of being outcast still really impacts my life today. I do feel as if most of my personality right now is a sort of facade.

There are many different stressors that can influence how teens are affected by anxiety and how they deal with it, including family circumstances, social conflicts, social media influence and stressors in school. However, anxiety disorders can also be attributed to genetic, psychological and developmental factors, according to a January 2016 Psychology Today article.

“I do believe that school is very beneficial, and the current course of education is structured in a way that is very wisely structured, but at the same time, I think a lot of students and I can agree that the workload is excessive,” senior Paolo Machon said.

Machon experiences symptoms of anxiety, and has dealt with anxiety episodes in school in the past due to stressors from school and his personal life.

“I know a lot of people see me as kind of a jokester, a happy go lucky guy, you look at me in the musicals or in the classroom and I’m very much like that,” Machon said, “but I do feel as if that sort of anxiety and fear of being outcast still really impacts my life today. I do feel as if most of my personality right now is a sort of facade.”

Machon is among approximately 36 percent of students at RHS who report having a mental disorder, according to a poll conducted by The Rampage. He also said that he has talked with his counselor in the past, and has been to therapy but stopped going, saying that his main support system right now is his friends.

“I always feel like having close friends to support you and listen to you is critical to at the very least maintaining your composure,” Machon said. “I feel like with constant reaffirmation, it has helped me a lot through some dark times.”

While both Schwartz and Machon have different experiences regarding mental health, exhibiting the wide variety of disorders under the general umbrella of anxiety, both emphasize reducing the stigma surrounding mental illness as a next step in easing the burden on students.

“I think when people think of mental illness they think “this person’s crazya�� and I think that the more people talk about it and the more people are willing to express what they went through, the less uncomfortable it will be,” Schwartz said.

However, while it is recognized that this stigma around mental health, and particularly anxiety, exists and there are pushes to decrease it, it is still perpetuated by the 80 percent of teens suffering from anxiety who never receive treatment.

In today’s society, with increasing pressures to excel in school and in the age of social media, there is a surge in anxiety among teens. The amount of children ages 15-16 reporting frequent feelings of anxiety or depression had doubled since 1982, a 2012 Nuffield Foundation article found.

While it is not a simple process to reduce the pressures on teenagers that may be causing or increasing their anxiety, there are ways to get treatment, including cognitive-behavioral therapy and medication. There are also ways for students to get involved in reducing the stigma surrounding anxiety, including having regular discussions about it.

“We need to stop dividing each other on this sort of instance, because no one’s immune to anxiety or stress,” Machon said.