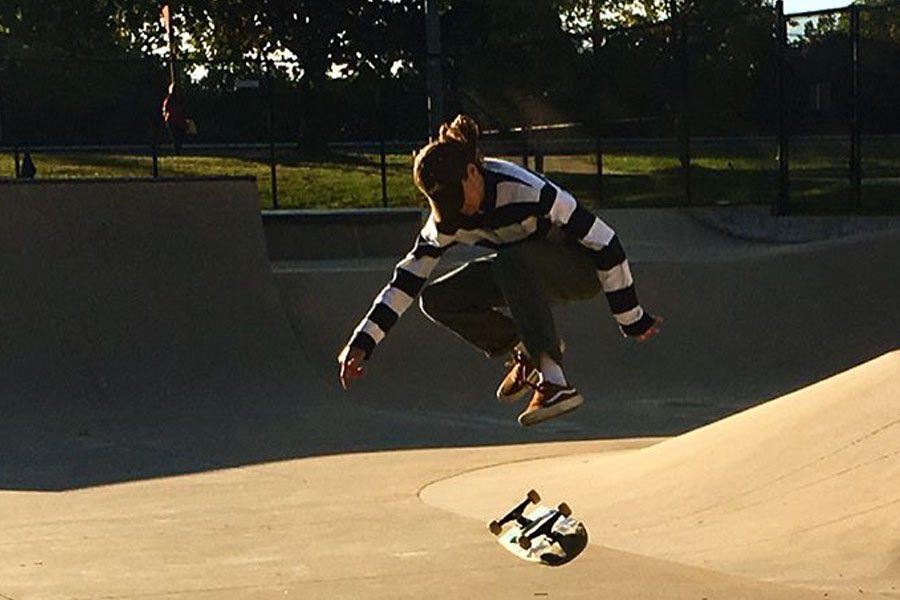 Senior Riley Hughes has been skateboarding since he was four years old, here he is at one of his favorite spots the Olney Manor Skate Park.

Skateboarding culture at RHS combines social interaction with individuality to express oneself on the board. Students enjoy skateboarding in the warmth of summer, though others will bundle up and skate in the winter as well.

According to the Public Skatepark Development Guide by Peter Whitley, endorsed by the Tony Hawk Foundation, 8.6 percent of youths in the nation rode a skateboard in 2010. Though the national average is quite low, and the number of skaters at RHS remain lower than other schools in the county, the activity is widely popular in Rockville and nearby areas.

Favored spots for senior Riley Hughes include the Olney Manor Skate Park and the streets of D.C. Hughes started skating by following in his uncle and cousins’ footsteps at the age of four.

“It takes a few months to really get comfortable on the board and start learning your tricks,” Hughes said. “But once you get it, there’s no better feeling.”

Skateboarding is different from traditional sports in that it does not require a team, but it does include competitions in particular categories, such as vertical skating, known as “vert,” where skaters perform aerial tricks in a halfpipe.

“A sport has rules and points and coaches. Skateboarding has none of that; it’s an individual thing that has no right or wrong way to do it,” Hughes said.

Over 125,000 Americans were treated in hospital rooms in 2015 due to skateboarding-related incidents, according to the National Safety Council. Security guard German Mendoza advised against skateboarding without the proper equipment, including a helmet, knee pads and elbow pads.

“I feel it’s very unsafe [without protection] because they can always crack their skulls,” Mendoza said. “If they wear the proper safety gear, they should be safe.”

Winter poses an even bigger threat to skateboarders as ice-covered surfaces causes wheels to skid or get caught in cracks and skaters are exposed to the winter elements..

“It is definitely more challenging than skating when it is nice outside because you run the risk of getting sick,” senior Nathan Silver said. “The cold makes it hurt more when you fall.”