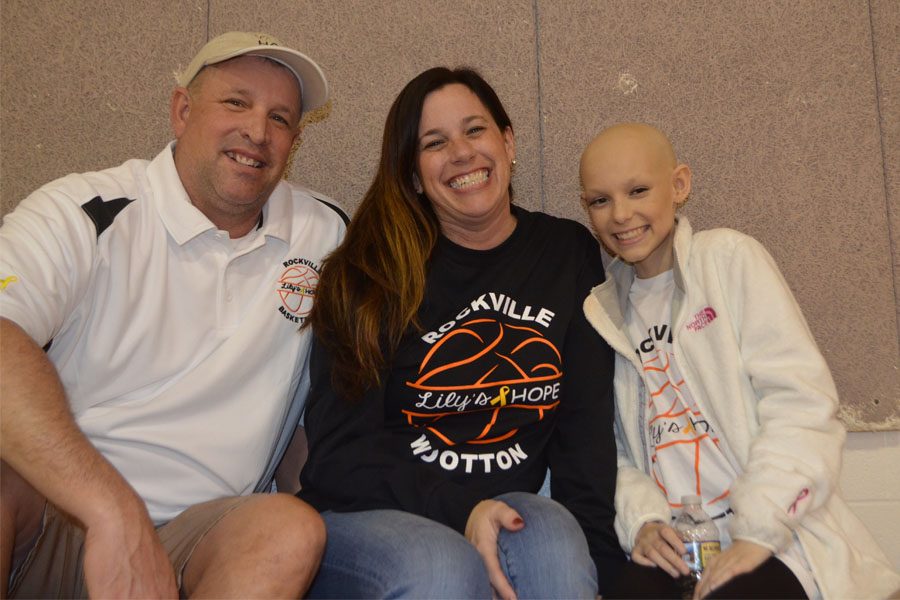 Physical Education teacher Frank Weaver sits with his family at the Lily's Hope event, this event has been occurring since 2011.

Once again members from throughout the RHS community gathered to support Lily’s Hope Feb. 6 which turned out to be a night of big wins for the basketball teams who both edged out the Wootton Patriots and an even bigger win for the RHS community after $2,300 was raised for the Weaver family.

The tradition of RHSa�� annual Lily’s Hope game began in 2012 to help physical education teacher Frank Weaver and his family by donating all proceeds from the night. After seeing the huge crowd and feeling all of the support from the Rockville community, Weaver was reminded of how grateful he is to be a part of RHS.

“It’s the best thing ever and it’s always been this way. Rockville’s a hidden gem; it’s the best school. I’ve been here for 20 years and I don’t hope to go anywhere,” Weaver said. “All you guys coming out and supporting not just me but, last year when we did a fundraiser for another family, and we’ve done it for [other] families of kids that had cancer in this school; it’s just the best.”

Lily Weaver was diagnosed with Ewing Sarcoma, a rare form of bone cancer, in her arm when she was 10 years old. In 2011, Frank Weaver and his wife, Amy began the Lily’s Hope organization to help their daughter’s battle against cancer. After being in remission for five years, Weaver was rediagnosed in 2017.

“It feels absolutely incredible in knowing that people are [here] supporting, not only me, but also other kids with cancer and raising awareness for people who don’t have a voice,” Weaver said.

For the past six years, RHS has held this event to benefit families of students battling cancer. This school year, RHS hosted four events where all the proceeds went towards Lily’s Hope: a field hockey game, volleyball game, powderpuff football tournament and this week’s Lily’s Hope basketball games.

“I’m really honored to be able to play in a [basketball] game that represents something so much more. I love that we play this game each year because not only does it bring awareness to childhood cancer, but it also raises money to help the Rockville community, specifically the Weaver family,” senior captain Michael Mantzouranis said. “This year has been a tough one at RHS following David [Robbinsa��] passing and Lily’s condition, and I think this game helps bind our community together in a hopeful and inspiring way.”