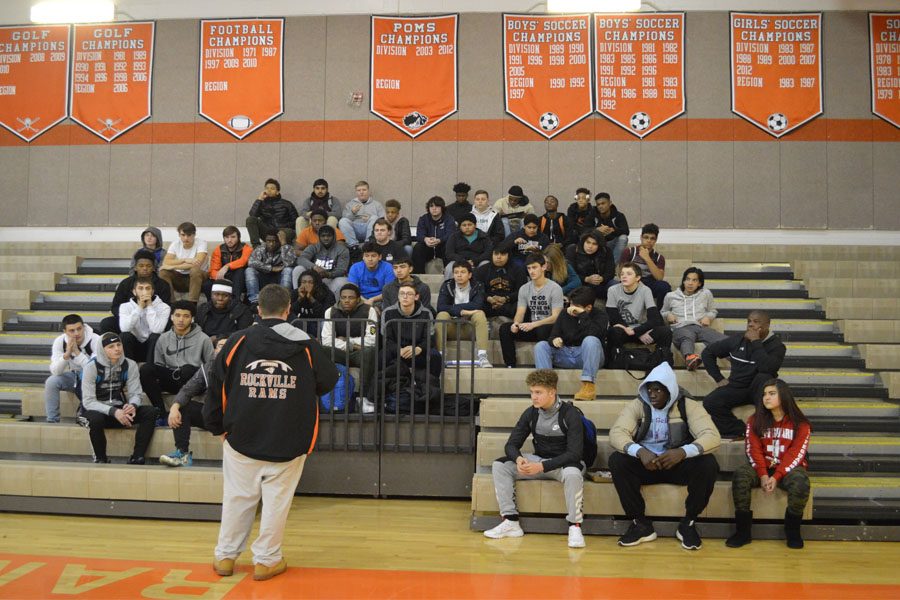 Former coach Jason Lomax will be the head coach for 2018, he spoke to next year's team members.

Former RHS offensive coordinator Jason Lomax will be returning to fill the vacant role of varsity football head coach for the 2018 fall season after three seasons as head coach for Springbrook HS. Lomax spoke to the football team in the auditorium Friday Dec. 15 and introduced himself to the team.

While at Springbrook, Lomax had a combined record of 10-19-1. When Lomax was at RHS, his squad put up county and state records, including the county single season passing record of 3,262 yards, held by Chuck Reese (“15), who also holds two single season passing records in the state at sixth and 11th. Between his junior and senior years, Reese placed 11th in the state in career passing yards with 6,241 and is tied for first for most touchdowns in a game.

Looking ahead to the season Lomax recognized that rebuilding the program will take a lot of work.

“It’s a little premature like I said in the meeting today, Chuck, Louison (Biama “15), Anthony (Albert “15), Tony (Emeche “15), Joey (Cornwell “15) Spencer (Brigman “15), those guys came every day for four straight years working and working. It didn’t happen overnight, just like this is not going to happen over night,” Lomax said.

Junior receiver Andrew Pace has now played on varsity for two years. Last season as a captain, Pace led the team in receiving yards with 335. Pace attended the meeting that Lomax held to introduce himself to the team.

“I believe we have the potential and players to put up the numbers that we saw years ago. But I worry about the players’ dedication and attitudes towards the team and coaches and fellow players,” Pace said.

Full version to come in the Print Edition