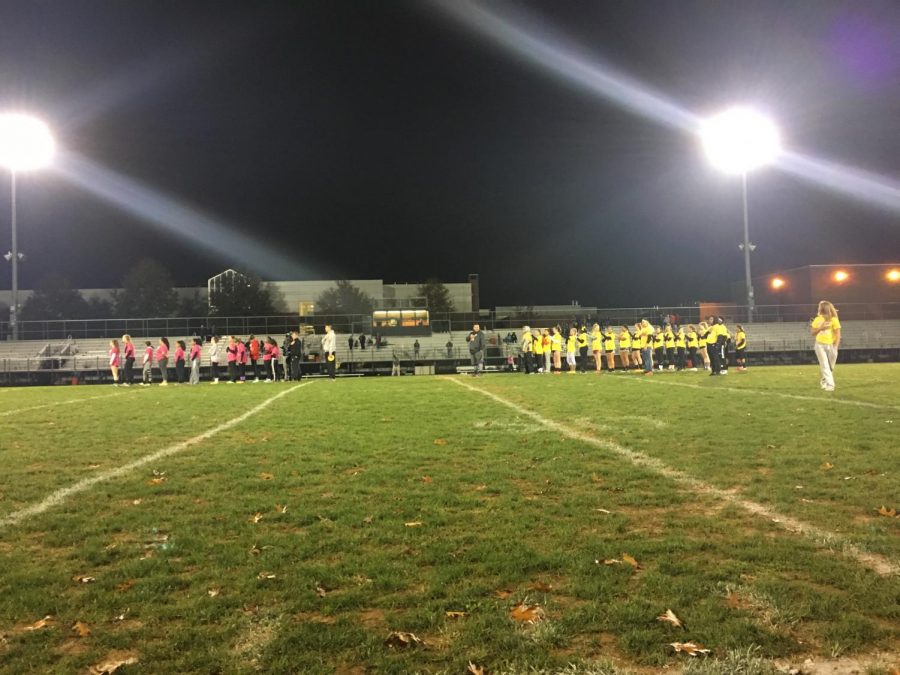 The sophomore class prepares to take on the juniors in the powderpuff semifinal game.

After being rained out the day before, the class of 2020 ran away with this year’s Powderpuff championship Nov. 8, defeating the class of 2018 in the final game 6-0, in an evening filled with fun competition with all proceeds going to the Lily’s Hope Foundation.

In the semi-final games, the class of 2020 conquered the class of 2019 24-12. Before the game started, sophomore coach Dylan Monday was confident about how the sophomores would perform against the juniors.

“We have a 100 percent chance of winning tonight. They can’t hang with us, and we’re more prepared than ever. Easy dub,” Monday said.

While the class of 2020 won, the game was more exciting than Monday anticipated. Junior Charlotte Davis scored two touchdowns on her team’s first two drives. However, the athleticism of the sophomores was overpowering, keeping the juniors scoreless after their 12-6 halftime lead.

Going into the game, freshman coach Eric Giron was confident in the freshmen’s chances. However, the size and experience of the seniors extinguished any freshman hopes for a victory. Senior Lauren Giron was the star of the game, scoring two of the team’s three touchdowns.

In the championship game, the sophomores defeated the seniors 6-0, successfully shutting down the seniors’ running game and sneaking in a touchdown early in the game.

This year’s games were formatted differently. Before this year, the seniors played the juniors and the sophomores played the freshmen, and there was no championship game. The SGA proposed a new format that was implemented this year, seniors versus freshmen and sophomores versus juniors, with the winners of each game playing each other for the championship, SGA sponsor Katherine Gross said. This change was made so that one grade could be crowned winner, unlike last where certain grades only played one team.

Every dollar that was made from the game will go to support Lily’s Hope, a foundation to help support the Weaver family. The current amount raised is unknown, but in past years, the event raises approximately $1500 dollars.