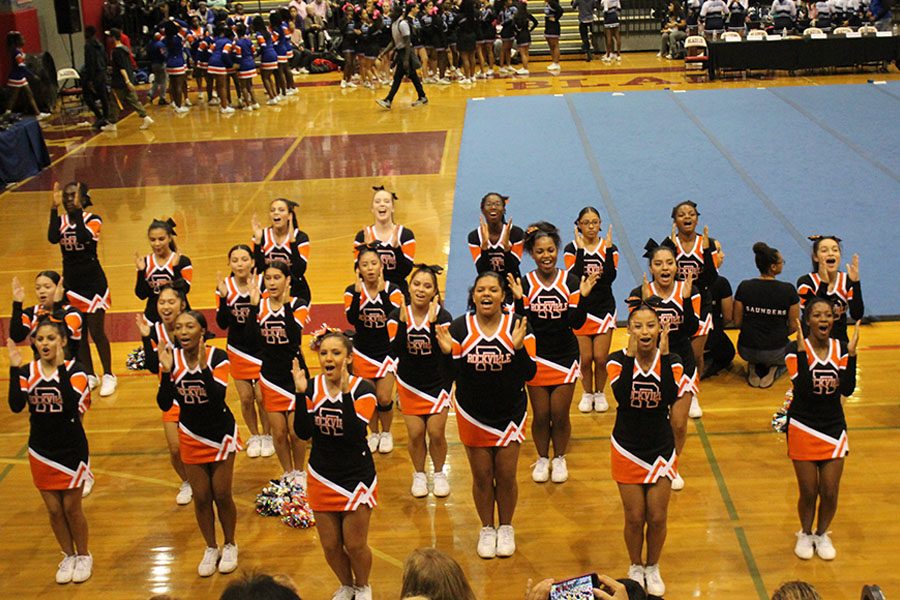 The cheer team improved from placing eighth out of nine schools last year to jumping past four more teams this year and finishing behind Paint Branch High School, Watkins Mill, and Seneca Valley. The 2017-18 squad consists of 24 girls who were able to pull ahead this year through various off-season workouts and a lot of hard work.

“I don’t think people realize how hard it is to get those stunts up,” coach and art department resource teacher Julie James said. “For a lot of them it was new, but I think they did a great job. This is by far the most talented team I’ve had so far.”

This past year, MCPS cheerleading joined the Maryland Public Schools State Cheerleading Association which allows all cheer teams in MCPS to qualify for state championships.

“We had unanimous support from principals, athletic directors, and coaches to join the state association,” MCPS athletic director Jeffrey Sullivan said. “We are excited about the additional opportunities for our cheerleaders in the realm of competition.”

RHS did not make it through to the state semi-finals, though the cheerleaders were able to compete against teams from other counties, such as Cecil and Anne Arundel County at the Oct. 7 Kent Island Invitational in Queen Anne’s County.

“Throughout what we do on the mat, during practice, [and] warm-ups, we work as hard as any other team,” sophomore captain Breanna Daley said. “We went out there and we did the best stunts we could do.”