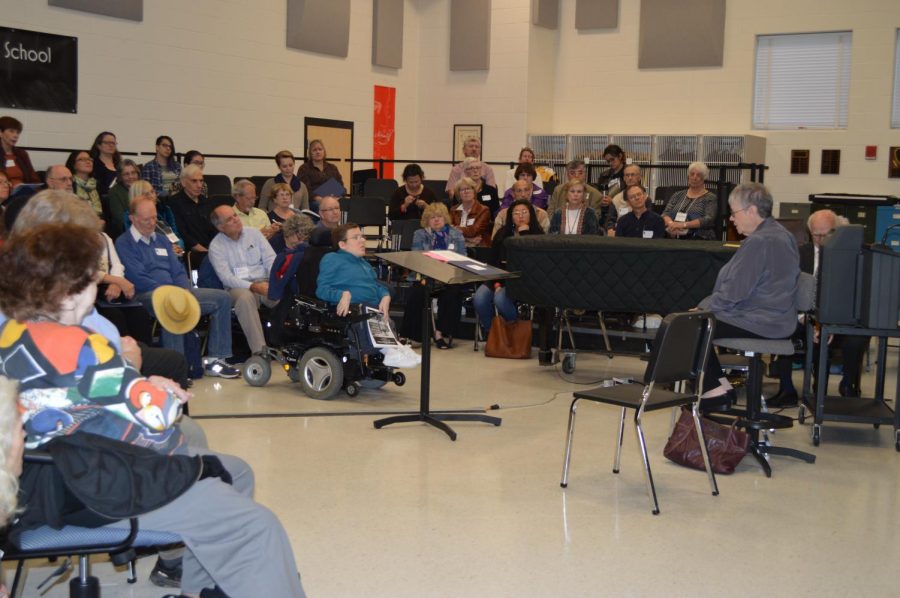 Annie Proulx speaks to festival attendees about the film adaptation of her film, Brokeback Mountain.

Each year, the festival honors a number of students from different MCPS schools for academic excellence in English classes, as well as a different writer to present the Fitzgerald award to. While a wide range of authors have been presented the award and each year has a different theme (this year’s theme being the environment), the festival still honors Fitzgerald through different workshops and activities.

Included in the day’s festivities was a screening of the 2005 film “Brokeback Mountain,” based off of Proulx’s 1998 short story, as well as numerous workshops led by different writers and journalists. There was also a master class in which Annie Proulx sat down for an interview with Washington Post book critic Michael Dirda. Other guest speakers included Washington Post cartoonist Tom Toles and literature professor Anne Margaret Daniels.

At the end of the festival, a ceremony was held for the MCPS Fitzgerald Literary Scholars, the short story contest winners and for Proulx.

“I hope to expand my literary knowledge,” said RHS Fitzgerald scholar senior Alex Rankine after a workshop with Washington Post columnist Alexandra Petri. “I’ve learned some new techniques on how to approach satire.”

The festival is located in Rockville, because although Fitzgerald did not live here, he is buried here and often came to visit family in the area throughout his life. However, this is the first time it has been hosted at RMHS.

“We always focus on F. Scott. We focus on some piece of his literature or some of the subjects that he focused on,” said Susan Hoffmann, member of the F. Scott Fitzgerald Literary Committee and former mayor of Rockville. “We’ve done things on the Jazz Age, and we’ve done things associated with music or art. In the early festivals we actually had some people on panels that knew [the Fitzgeralds].”

Along with honoring Fitzgerald, the festival also makes sure to get students involved by honoring the literary scholars from different high schools and by having special workshops for them. This year’s student writing workshop was led by Petri.

“[The students are] who are going to be writing the stuff we’re all going to be reading in the future, and even right now,” Petri said. “We have as much to learn from students as they do from us.”