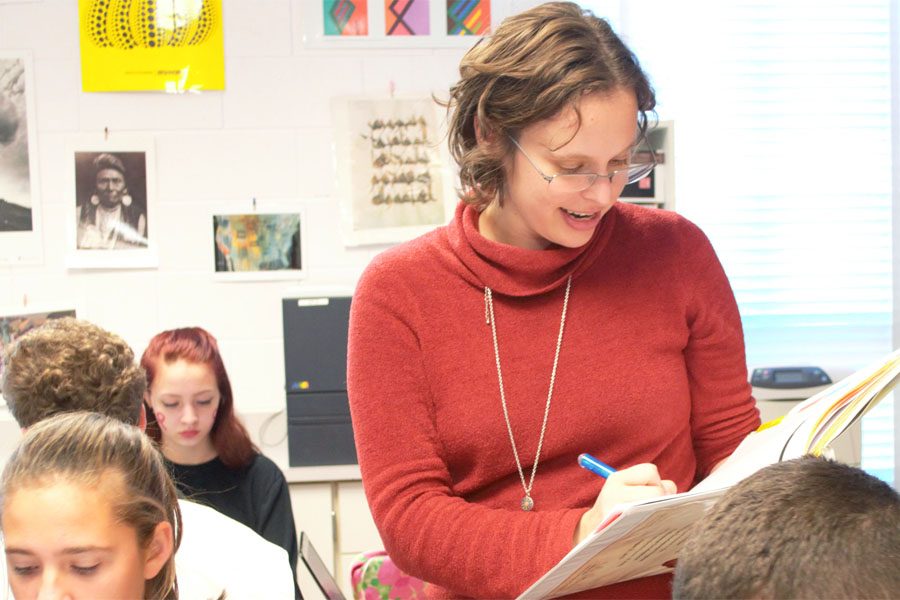 English teacher Krista McKim speaks with her AP Lang students, who will be the first to experience the new journalism unit. McKim traveled to Bulgaria this summer, where she gained a new perspective on the migration and refugee crisis.

AP Language teacher Krista McKim went on a trip to Bulgaria, during the summer of 2017, as part of the Fulbright-Hays Commission, to meet with groups that work with refugees, and is now bringing her experience back to the classroom to add a global perspective to the curriculum.

Beginning this year, McKim’s AP Language classes will be studying the refugee crisis as a part of their journalism unit. The classes will be paired with a Bulgarian classroom and will be interacting with each other via Skype. The two classes will eventually be writing “This I Believe” speeches, oratory works that highlight the student’s personal philosophy, and exchanging them with one another.

“This program allows my students to meet refugees and migrants face-to-face and make their own decisions on how the U.S. should handle the migrant crisis,” McKim said.

The Fulbright-Hays Commission, funded by the congressional Bureau of Educational and Cultural Affairs (ECA), is an exchange program for teachers and students that was established after World War II to prevent war through cultural and education exchange.

In Bulgaria, McKim’s main goal was to gain perspective on the migration and refugee crisis in Europe that got worse in 2015 at the height of the Syrian civil war. While there Mckim met with members of the United Nations High Commissioner for Refugees, the National Commission for Combating Trafficking in Human Beings and the Bulgarian Council on Refugees and Migrants. She also visited schools in refugee camps with other Fulbright Hays members to give feedback to the teachers on their lessons.

“The refugee camps in Bulgaria were horrific. [There was] no electricity in parts of them, running water was iffy at best. They didn’t really have trained teachers or a curriculum,” McKim said. “It was very interesting where in America we see chromebooks in every classroom, when you’re going into a school [in Bulgaria] and they say “yeah we have internet in this one room.”

To participate in the Fulbright program, teachers must indicate how they plan to incorporate what they have learned overseas into their classes.

English resource teacher Martin McCarrick said he was extremely proud of McKim for taking the opportunity with Fulbright and bringing her perspective back to RHS.

“I am a firm believer that we have to always consider empathy particularly with those that are disadvantaged,” McCarrick said. “Now, for students to have the capacity to interact verbally and through writing with students that have experienced a very different world can only add to our understanding of the complex world in which we live.”

While the study of the international migrant crisis is new to the curriculum, AP Lang students have studied civil unrest domestically. Last year, they studied the Ferguson, Missouri unrest following the Michael Brown shooting by analyzing media coverage and ultimately formulating their own opinions on the issue.

“By analyzing multiple perspectives, it expanded my knowledge on police brutality and showed me how important it is to find reliable sources of information,” former AP Lang student senior Gabby Astorga said.

McKim’s main goal through the journalism unit is to broaden her students’ perspectives and help them to better understand the world.

Visit the Rampage Online for a Q&A with Krista McKim