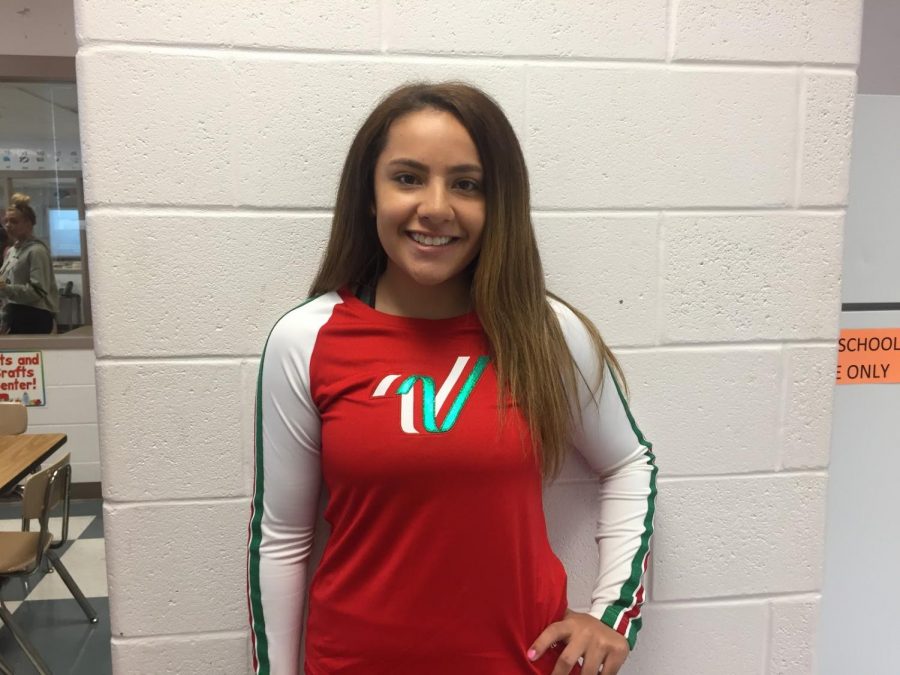 Senior cheer captain Valentina Garzon sports the uniform she plans to wear while participating in a parade at Walt Disney World, after being selected an All-American this summer.

Senior cheer captain Valentina Garzon was awarded the All-American Award for Performing and Leadership from the National Cheerleading Association (NCA) in July 2017 in which thousands of students tried out for the award, but only 10 percent were chosen.

The All American Award is “an honor that recognizes hard work and unites passionate athletes across the country,” according to the NCA website. Garzon is the first student at RHS to receive the award.

Last summer, Garzon attended the NCA camp hosted at McDaniel College, where judges picked her to receive the award. She was later was invited to Disney World to perform at their annual Christmas parade in 2018.

Cheerleaders auditioning for the award must be able to perform a stamina three jump combination, as well as perform certain tumbling and stunting skills in order to be considered for the award.

Julie James, the Art Development resource teacher and child development teacher has been the varsity cheer coach for all of Garzon’s four years. She said Garzon has the ability to help her fellow cheerleaders.

“Val [Garzon] has great leadership skills. She breaks down things for the other cheerleaders so they can understand what is required for cheers or stunts,” James said.

Garzon has been serving as a cheer captain for two years, earning praise from her teammates for her leadership and positive attitude. She is known for being there for her teammates if they are confused or need help.

“[Garzon] always makes sure to give positive criticism so that we can all become better cheerleaders,” junior Marie Kurtz said.

The cheerleaders will be performing at the MCPS Cheerleading Competition Thursday, at 7 p.m. at Blair HS.