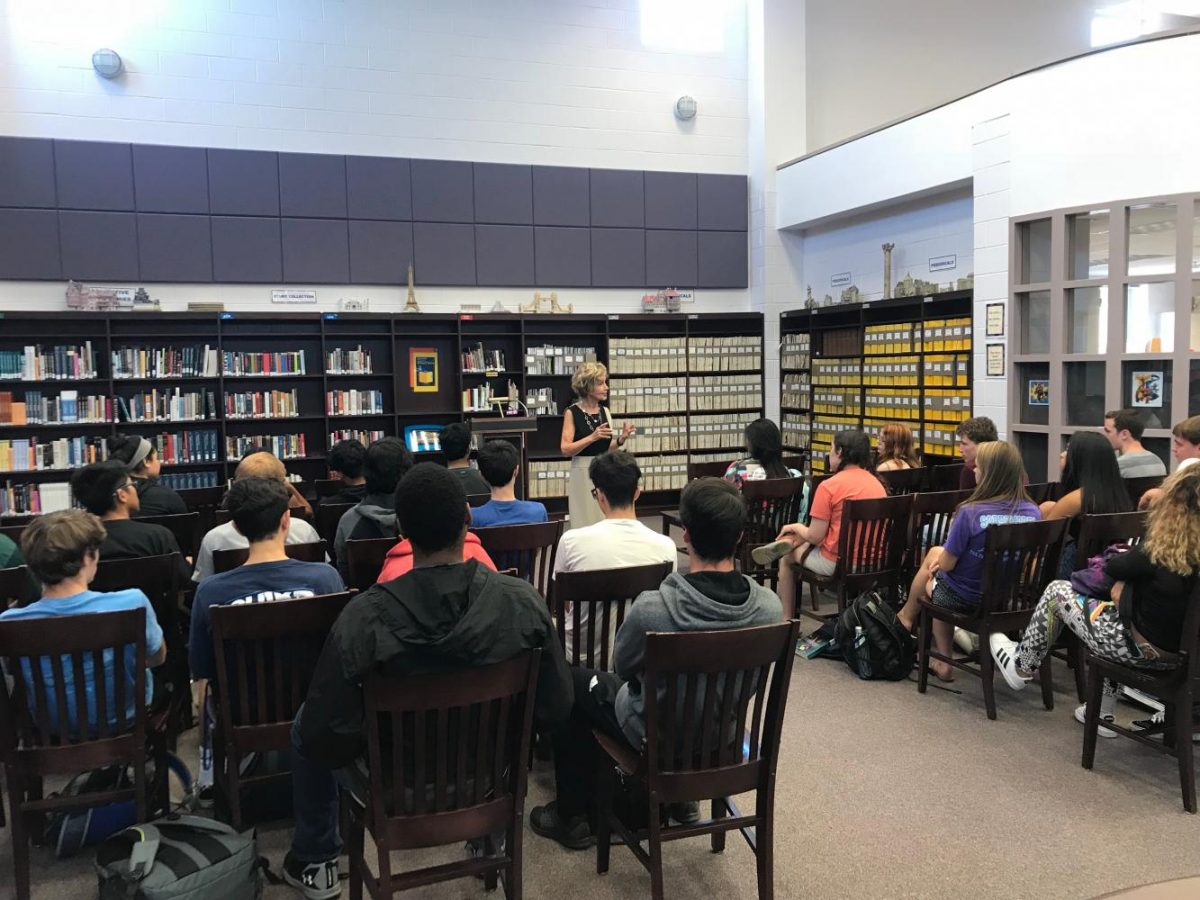 Former Maryland congresswoman Connie Morella spoke to English teacher Krista McKim’s AP Lang students in the media center Tuesday, Sept. 26 about a career in politics and her personal experiences in the U.S. House of Representatives.

For the first quarter of AP Lang, students learn about the rhetoric of politicians and people looking to make political change. McKim was put in contact with Morella by the U.S. Association of Former Members of Congress.

“I think it’s helpful for students to not just read the words of politicians but hear from a politician in person,” McKim said.

Morella’s primary reason for visiting was to inspire students to pursue a career in public service, she said.

“It’s a great opportunity to help legislatively with issues that are critically important for everyone, but also personally important,” Morella said. “Politics is people. It’s about connections with people.”

Morella has roots in Montgomery County and the D.C. area, having taught at Poolesville HS, American University and Montgomery College.

Morella’s political career began in 1971 when she became a founding member of the Montgomery County Commission for Women, a women’s rights advocacy group. Morella said she believed the best way to advance the Commission’s platform was to run for political office.

In 1978, she was elected to the Maryland House of Delegates, where she served for eight years. Morella went on to serve in the House of Representatives from 1986 to 2002.

Students who attended the presentation said they found it engaging and informative.

“I thought this presentation was pretty interesting,” junior Franco Ferruzo said. “[Morella] had a lot to say about her background, life and political experiences, and how millennials can be more active in the political process.”

Morella’s advice for students hoping to pursue a career in politics is to learn how to compromise and learn to work in a bipartisan manner to accomplish goals. Morella also suggested prospective politicians familiarize themselves with their peers.

“The more you get to know your colleagues, the more you can project your point of view to them,” she said.

Her final piece of advice was to be unafraid of failure.

“Look at so many of our famous [politicians],” Morella said. “They’ve lost elections, but you don’t even know it because it’s all part of the past and they came back and they ran again.”