New Safety Policies Have Been Implemented Following the March 16 Incident 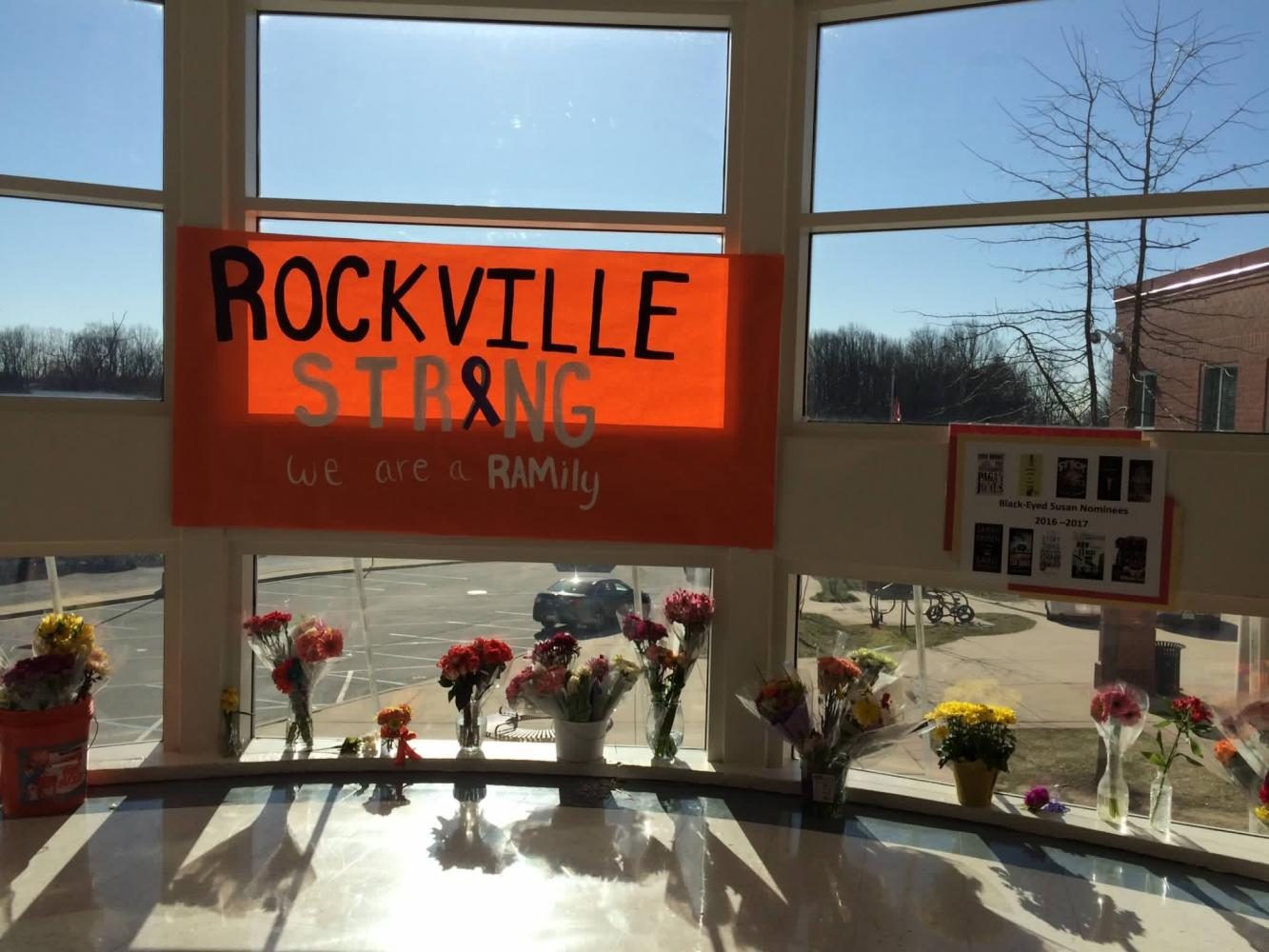 One of the many “Rockville Strong” posters is presented in the Rotunda. Students placed flowers for the victim following the March 16 incident.

Following the March 16 incident when two boys allegedly sexually assaulted a girl in a boys bathroom, RHS will be implementing new school-wide changes which have already begun to take effect.
“I first felt kind of annoyed [about the changes] but I understood that they were trying to prevent another problem from occurring,” senior Marlon Ovando said.
One security guard will be added to the current team of five, due to the expected increase of 100 students in the rising freshmen class, which will bring the school to a total of approximately 1,550 students. RHS also has 105 cameras around the school. The school has submitted a list of new camera requests to the county, including outside and by the student parking lot. They are still waiting for confirmation.
“We don’t sit in the security office and monitor cameras all day long,” Principal Billie-Jean Bensen said at the March 21 Parent Teacher Student Association (PTSA) meeting. “For the most part, quite honestly, we use those cameras to go back and look at investigations.”
Most policies are just being emphasized to students and staff. For example, hall passes are required from a teacher in order to leave the classroom, in which students are only allowed around five minutes, after which security would be called to verify the student’s whereabouts. Attendance is now also to be checked several times a period.
“Students must understand that when a staff member asks to see a pass and advises them on where they need to go, or to get on track and get there, we are doing so to keep the environment safe,” art teacher Laurie Wilks said. “Personally, I have encountered a great deal of resistance … with students when questioned. This seems to be a more systemic issue dealing with a lack of recognition of staff authority.”
The bathroom that the incident occurred in was the only student bathroom in the building (located across the auxiliary gym) with a locked door, whereas all other bathrooms have a walk-in layout. The locked door has been removed.
Some parents at the PTSA meeting proposed initiatives to prevent another incident. Bensen said the school will continue to work to get something organized. The school currently shares an on-campus police officer, who acts as the School Resource Officer (SRO), with Richard Montgomery HS. RHS will be hiring their own SRO next school year.
In a March 30 letter, MCPS Superintendent Jack R. Smith said the Department of School Safety and Security, school administrators and other departments have begun to conduct school safety and security protocol reviews since the beginning of April.
“While MCPS has a robust security system that includes thousands of cameras in schools, … security personnel, engaged teachers and administrators, and a partnership with the Montgomery County Police Department,” Smith said in his March 30 letter, “We must always consider opportunities to improve school safety.”
Areas covered in the reviews include but not limited to “utilization of school security personnel and other staff,” “facilities enhancements to restrict or limit access to more isolated areas of school buildings and grounds,” “technology infrastructure [security cameras and their use] and “procedures for managing students outside the classroom.”
A new summer project has been approved for to install locks onto the double fire doors to close off sections of the building and different hallways except for identified areas during events, weekends, the summer and the end of the day.
“I also require students to give me their cell phone when they sign out of class… In fact, there have been several occasions where students did not want to give the phone to me and instead decided they didn’t need to leave,” Wilks said. “I think this speaks to the student intention.”