It’s Academic Triumphs Against Opponents to Go to Semi-Finals 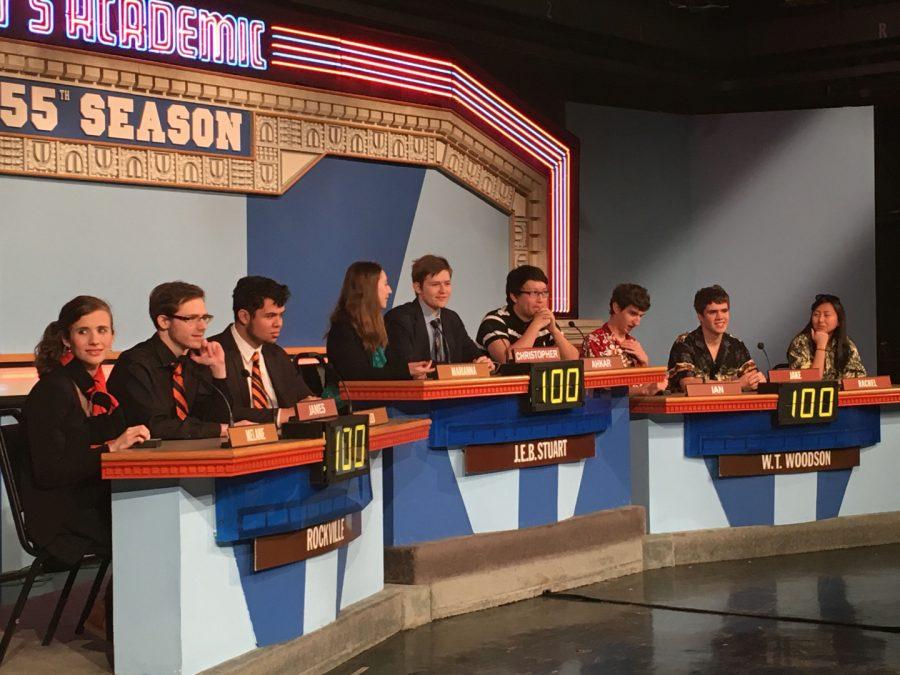 Currently, the It’s Academic team at RHS is on a 2-0 winning streak in the single elimination tournament-style TV series, “It’s Academic.” RHS is advancing to the semi-finals to compete against Blair HS and the winner of the Quince Orchard, Walter Johnson and Thomas Jefferson match.
In the latest TV match, RHS senior captain James George led his teammates, seniors Melanie Atzili and Leo Blondel. J.E.B Stuart HS and Wilbert Tucker Woodson HS (Woodson) competed against RHS. At the beginning of the first round, each team began with 100 points, with each correct answer worth an additional 10 points and each wrong answer a 10 point deduction.
The first round began with eight questions. RHS took the lead, buzzing in on the first question and later answering four more, all of which were answered correctly. While J.E.B Stuart buzzed in for three questions, answering two correctly, Woodson did not buzz in at all. By the end of round one, the scores were RHS – 150, J.E.B Stuart – 110 and Woodson – 100.
“It’s kind of very hard to tell until the very end [of the season], but so far this is a remarkable team. I’ve coached a number of metro champion teams. They’re a pretty amazing combination of very fast and very deep,” head coach Dr. David Goodrich said.
Principal Billie-Jean Bensen, Goodrich and Assistant Coach Mike Smith, came to support the team at the studio. The second round included five questions, worth 20 points each, with the opportunity to win 100 total points. In this round, there was no penalty for an incorrect answer. By the end of the round the scores were, RHS – 250 J.E.B Stuart HS – 180 and Woodson HS – 210.
“I think a lot of it is anticipating what the questions are going to be. You need to be able to jump the questions early,” Goodrich said.
The third round continued with eight questions. Woodson jumped to answer first but was incorrect. RHS answered five correctly ending with a score of 350, ending the round with a significant lead over the other schools.
The next segment was the bonus round, with eight questions per team. J.E.B Stuart picking a packet of questions for RHS to answer. RHS answered all of the questions correctly, earning a 25 point bonus, and ended the round with a score of 535. Woodson chose the packet for J.E.B Stuart, who answered seven correctly, ending with a score of 320. Woodson received the last packet available and earned the 25 point bonus for answering all of the questions correctly, ending with a score of 415.
The final round was the Grab Bag, a timed section with different types of questions where questions are worth plus or minus 20 points and questions with visuals are worth plus or minus 30 points. Contestants have the opportunity to answer as many questions as the time permits. RHS buzzed in for five questions, answering only one incorrectly. Woodson buzzed in for four questions, correctly answering three. By the end of the match, the final scores were RHS – 565, J.E.B Stuart – 290 and Woodson – 465.
After the match, George said, ” Our team performed as well as we could have. We came in on an 18 match competitive winning streak, and we were riding a wave of momentum.”
In the regular season, RHS had a 12-4 record and was ranked in sixth place out of 25 teams in the Montgomery Academic Beltway League. The team also finished first in the “Green Eggs and Hammond” tournament, where they won against the three time defending It’s Academic Super Bowl champion, Centennial A.
“I’ve got to tell you that it’s inspiring to watch all of the students who clearly love learning, and not just to be successful but learning for learning’s sake,” show host Hillary Howard said.