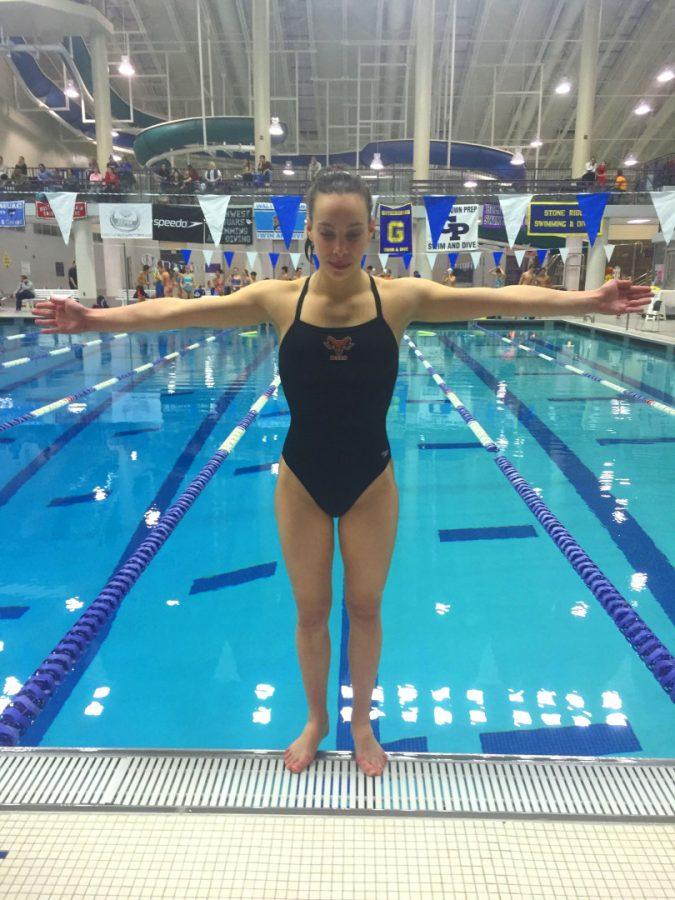 Diving off high spring boards, flipping in the air and landing smoothly in the water is something that varsity dive star junior Daphne Kirschner accomplishes daily.
“Daphne is very aware of her skill set and carefully selects her dives to highlight her strengths. She is very graceful and precise in her movements, which makes her a good diver,” RHS Head Swim and Dive coach James Castonguay said.
Kirschner has been diving for a little over a year, including for the Montgomery Dive Club (MDC), the Amateur Athletic Union (AAU) National Team and the RHS varsity dive team.
Prior to her diving career, Kirschner competed in acrobatic gymnastics for nine years, as well as nationally and internationally on the U.S. National Team. She easily transitioned to diving due to her acrobatic experience.
MDC coach Noah Ehrenberg says Kirshner is strong, an extraordinary athlete and has great body awareness and control.
“Daphne’s strengths come from her drive to get better and her ability to understand what she needs to do to get to the level she wants to dive at,” Ehrenberg said.
Kirschner practices two hours a day, four times a week to perfect her front, back, inward, twisters and reverse dives.
At meets, she competes in the one-meter springboard and three-meter springboard competitions. Most of her optional dives are one-and-a-half somersaults in a pike position and double somersaults in a tuck position. She is currently working on a front two-and-a-half pike off a three-meter.
“I love constantly being able to try new things. Diving is fun in the sense that there are so many moves to learn and build off of so every practice is interesting,” Kirschner said.
Kirschner has been on the RHS swim and dive team for two seasons. In her first season, she was awarded the title of “Newcomer of the Year” and a varsity letter.
Castonguay believes Kirschner is a great help to other divers on the team. Kirschner’s advice to beginners is to not let embarrassment get in their way.
“It can be embarrassing to fall on your face, but in the end, everybody makes mistakes and you shouldn’t let your fear get in the way of trying new things,” Kirschner said.
In the divisional competition for RHS Jan. 30, Kirschner placed second with a score of 227.4 and scored 17 points for the team.