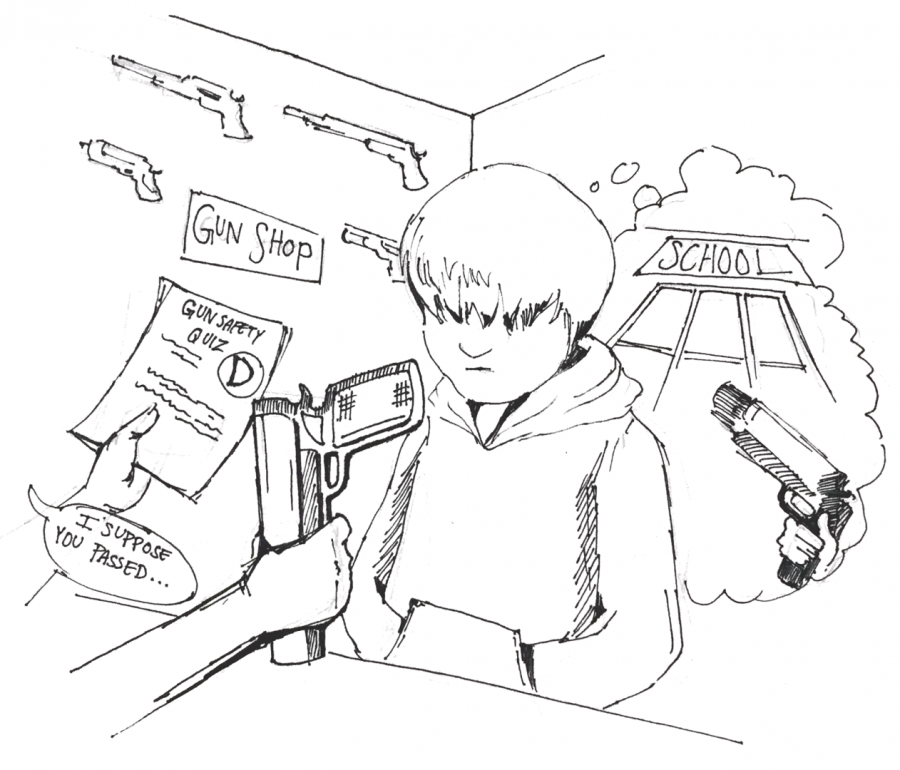 As many of us know, the U.S. Declaration of Independence provides Americans with three “unalienable rights”: “Life, Liberty and the Pursuit of Happiness.” What happens when the first and third of these rights are in serious jeopardy due to a national obsession with guns, which can snuff out life in an instant?

According to the New York Times, in 2015 the U.S. saw more mass shootings than there are days in a year, on average. We are a major world power and serve as an example for countless other nations, so this statistic is absolutely unacceptable.

This data becomes especially worrisome when we consider the fact that 64 of these mass shootings took place in schools last year, according to Everytown for Gun Safety. Statistically speaking, any one school could be the next to inadvertently play host to a gunman’s rampage.

“There’s no hard and fast that’s going to say that’s never going to happen here,” security guard Paul White said. Indeed, even though Montgomery County is known for being quite safe, we truly never know what tomorrow could bring. MCPS schools have effective lockdown procedures in place, but it is best not to end up in a situation in which a lockdown is necessary.

Although it is painfully obvious that something needs to be done on the federal level to fix our sorry excuses for gun laws, it sadly does not look like this will happen any time soon. Why? There’s an outdated piece of the Constitution called the Second Amendment standing in the way. It explicitly states, “A well regulated Militia, being necessary to the security of a free State, the right of the people to keep and bear Arms, shall not be infringed.”

Here’s the problem, though: the Constitution was written over 200 years ago, when the newly-formed U.S. was recovering from the Revolutionary War and still afraid that the British would come back for another attack. Naturally, the government wanted citizens to be able to protect themselves from this threat, so it essentially made every (free) American an unofficial soldier by allowing them to carry weapons.

This threat is long gone. We now have what is perhaps the strongest, best-equipped military in the world. An attack on U.S. soil is quite unlikely at this point. It is true that crimes still occur every day that make us fear for our safety, from robbery to sexual assault, but a deadly weapon is far from necessary for maintaining personal security.

Therefore, it is about time we learn to put down our shiny little toys because clinging onto them as we do (even though the government is unlikely to ever ban guns completely) makes it much too easy for them to end up in the wrong hands.

In the novel Harry Potter and the Prisoner of Azkaban, the wizarding newspaper The Daily Prophet defines a gun as “a kind of metal wand that Muggles [non-magical people] use to kill each other.” That is an important point to remember. Guns were designed for war and perhaps hunting, not for casual civilian use.

Granted, most gun owners are responsible and quite unlikely to shoot up a school or public place, but the small fraction of Americans who become a danger to themselves or those around them when they have access to firearms are, according to the Huffington Post, responsible for about 36 deaths every day. That makes more than 13,000 gun-related deaths every year.

“Sad but true, people who do want to get a gun will normally get a gun through illegal ways. It is vital for us to make it harder for them to get guns,” senior Jonathan Garcia said.

It’s time for additional nationwide restrictions on the purchase of firearms and ammunition, as well as a thorough, nationally standardized process for conducting pre-purchase background checks. Even with these increased security measures that we so desperately need, gun owners can still keep their prized possessions. Misinformed citizens need to stop whining and realize that a 200-year-old law that is now out of context is not worth the lives of thousands of innocent Americans.