Give Chance a Chance 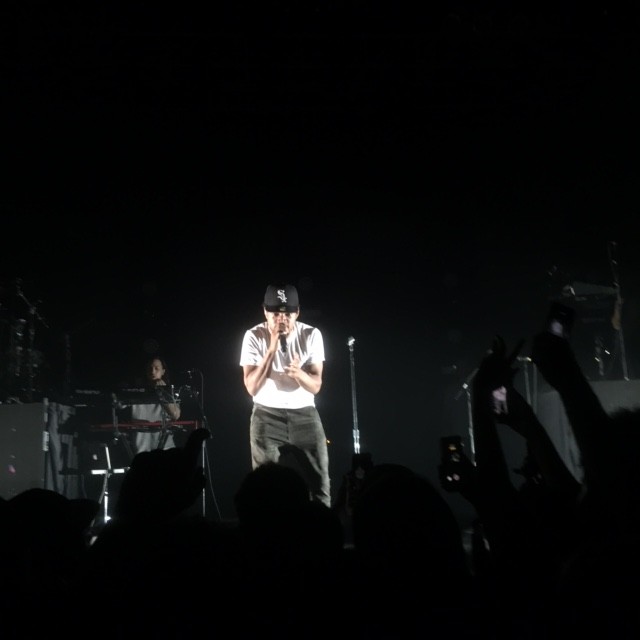 Dozens of eager concertgoers diligently stood in the frigid pouring rain for hours outside The Fillmore in Silver Spring, Md. Wednesday night. The reason? Chance The Rapper was to perform in a mere few hours.

Arriving late to the show was a foolish move in the eyes of the dedicated fans dying to see the artist. Chance the Rapper, real name Chancelor Bennett, headlined the Family Matters Tour with assistance from opening acts Towkio, D.R.A.M. and Metro Boomin. The unforgettable concert sold out shortly after tickets went on sale.

The show began at 8 p.m. as Towkio first took the stage. Both Towkio’s sound and onstage charisma shares striking similarities to Bennett’s. Though the majority of the audience was introduced to the most of the songs in Towkio’s set for the first time, “Heaven Only Knows,” a song he collaborated with Bennett on, was met with cheers and a unison of voices singing to the familiar beat, a highlight of his time on stage.

After a moderate delay, D.R.A.M. began his set. The rap-pop singer first rose to prominence this year with his breakthrough single, “Cha Cha,” however he was able to move the crowd with new singles off his sophomore EP “Gahdamn!” D.R.A.M.’s set differed greatly from Towkio, as most of his music had a slower tempo and this seemed to incite a groggier atmosphere amongst concertgoers .

The crowd was riled up once again as producer and disc jockey Metro Boomina�� performed. He remixed popular songs as “Multiply” by A$AP Rocky and ” Hard In The Paint” by Waka Flocka Flame to excite and prepare the crowd for Bennett’s nearing appearance.

At 10 p.m., Chance the Rapper finally took the stage, opening with “Everybody’s Something”, a crowd favorite off of his second and most popular mixtape “Acid Rap”. The performance included songs from all of his projects, including those with “The Social Experiment”, a Chicago based music group.

Because the show was in the Washington Metro area, Bennett brought ou D.C. native rapper Shy Glizzy to perform a few quick hits including “Funeral” and “Awesome”, which hyped up the crowd with their club bang feel.

Bennett finished off the set with “Sunday Candy”, his most popular recent single, before coming back on for an encore with the crowd chanting for more. After shaking the floor with a few more bangers, Bennett finally called it a night.