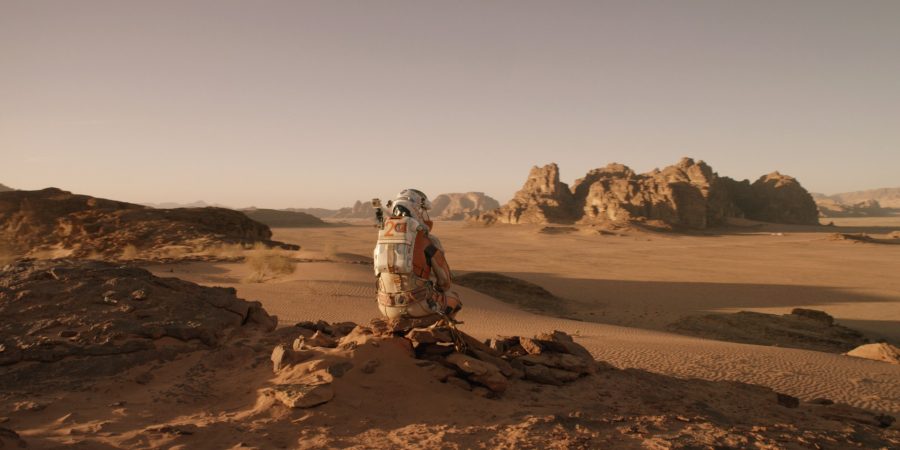 What do you get when you mix a botanical astronaut, space potatoes and subtle pop-culture references with great acting from great actors? A fun, (mostly) scientifically plausible adventure that brings humor and suspense to a situation that could have been in all ways a disaster flick.

Directed by Ridley Scott, The Martian starts by introducing us to the vastness of space through an establishing shot of Mars that takes your breath away. This grandeur and enormity is nicely contrasted with the intimate feel of the story, whose heart revolves around the spirit of camaraderie and perseverance shared by a small crew of international astronauts, including American botanist Mark Watney (Matt Damon) and Commander of the space mission Melissa Lewis (Jessica Chastain).

The plot centers on Watney getting stranded and left behind as deceased as an excavation mission goes horrible wrong via an unexpected dust storm that separates him from his team. Focusing on many different aspects, we see the guilt and accumulating sense of responsibility shared by the crew members, the endurance of the human spirit conquering nature through science, as well as the communal sense of companionship between China and the U.S.

What really makes this movie shine, besides the exceptional graphics and convincing acting, is the humor and lighthearted moments that keep the story grounded and relatable for the average science knuckle-draggers. A Lord of the Rings joke presented by none other than Sean Bean, as well as a blatant Marvel Comics reference by Ant Man star Michael Pe a really gives the audience a treat if they have seen those movies.

There is some swearing and tense action, but I would recommend the movie for the whole family; even the children would not have a lot of trouble. Overall, the movie has great special effects, great acting and dialogue, and a great message that reminds viewers that in times of crisis, it’s either get busy living, or get busy dying. Watney, refusal to give up no matter how insurmountable the odds is uplifting and inspiring.