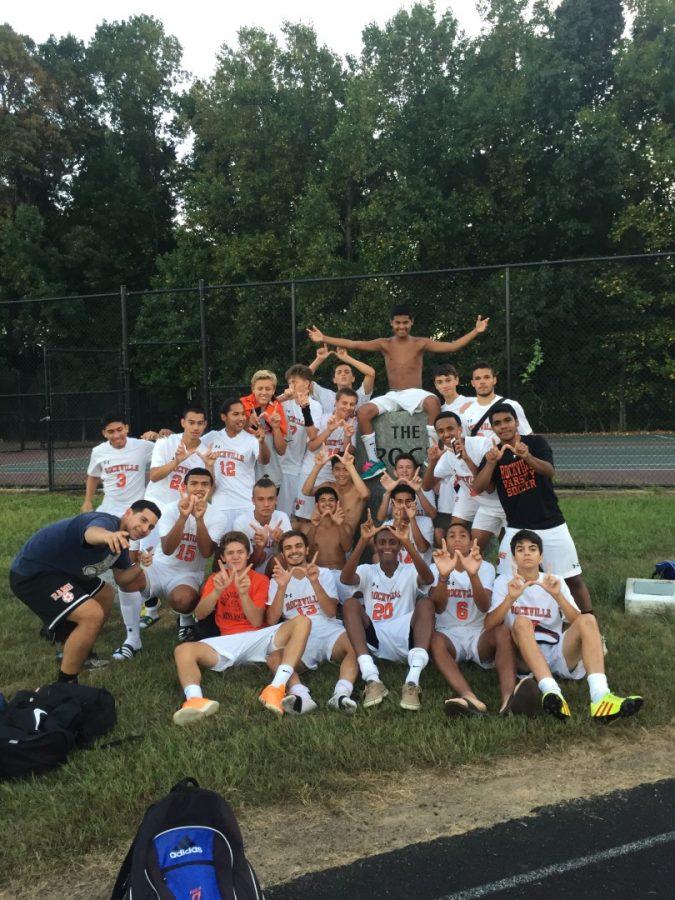 Rockville celebrates around "The Rock" after a victory over long-time rival, the Richard Montgomery Rockets.

The boys soccer team continues their improvement into this season with a very strong start. The team defeated rival Richard Montgomery and a majority of their losses have been in overtime.
The Rams had not beat the Rockets for ten years going into this season. Senior captain Carlos Piedrasanta was determined to end this losing streak in his final year.
“Beating RM should be a goal for every player, no matter what sport, it’s just one of those things you have to accomplish by the end of your high school career” Piedrasanta said. “For us it’s also about showing that we are not the team we were years ago, we have moved on”
The Rockets opened scoring within the first minute, through a defensive mistake by the Rams. The second half brought new hope and with senior Conor McGinley scoring an electrifying free kick right outside the box, the team was back in the match. Then with a second goal by junior Nick Blassou, the team had secured the win.
“This year’s team has a lot of individual skill and specialization and when we are able to work together and create a combined team effort, we feel like we can beat anyone,” Blassou said.
The energy was intense for both teams and it was a well fought match, but the Rams’ persistent pressure in the second half outmatched that of Richard Montgomery’s. The Rams carried this energy into their other games as well, but they were always left short.
They had three games in a row where they lost to their opponents in overtime. Finishing is something the team has always struggled with, and being so close this year, just makes the losses even more upsetting.
“We could have a winning record right now, but we just can’t score in the most critical moments,” assistant coach Michael Nagy said. “Focusing on how we can close out our games in regular or overtime, will be an important part of how the rest of the season plays out.”
The Rams mainly use a kick-and-run strategy where defenders hit the ball up to the forwards to quickly develop scoring opportunities. While, this strategy may work against teams with weaker defenses, it is not always the most successful in tough competition. Passing the ball more and slowly pushing up the field is what it might take for the Rams to create better scoring chances and win games.