PRO: High Level Courses Are Open to All 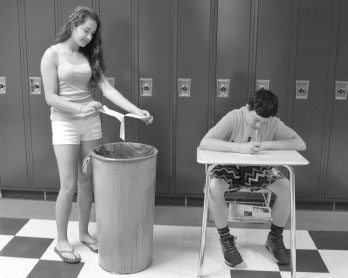 The ability to take advanced classes is a privledge, but having to test into the higher-level programs is unfair and may deminish a students chance to excel in school.
Now picture you fail that test. All you wanted was to get accepted into the IB or AP programs so you could challenge yourself and have a better chance of getting into your dream college. Now you cannot because you failed one standardized test.
Students should not have to test into IB or AP courses. They should be able choose to take a more rigorous education path and push themselves to learn and develop without being hindered by meaningless test scores.
Standardized tests can be faulty, with even straight-A students failing such exams. Colleges are putting less and less emphasis on students’ SAT and ACT scores to determine if they get accepted or not. They are seeing that these standardized tests do not always showcase a student’s true intelligence. Rather, the scores show their obedience and test taking skills, such as the ability to sit still and memorize pointless definitions, which is not a main factor of success in the IB/AP programs.
IB coordinator Laurie Ainsworth thinks that including tests to get into the IB program ruins the whole purpose of the IB pathway.
“IB is an open access program here at Rockville High School, and the IB [program] believes that any student who wishes to undertake IB studies should be allowed to do so,” she said.
Teens who are not yet strong enough students can use IB or AP to develop throughout the years to eventually become able to think and work at a higher level.
Pre-IB English teacher Brian Annear strongly believes in allowing students to learn and grow in the system rather than only allowing them to take on the challenge if they are already at a high level of understanding.
“All students [should have] the opportunity to take a challenge if they feel they want to,” he said.
In the past couple of years, the IB test scores at RHS have only been a little below the ones at Richard Montgomery HS (RMHS), which is a magnet school in which students must test into the IB program. The data shows that RHSa�� system works just as well as the one at RMHS. The only difference is that we give students a choice.
“We don’t want IB to be exclusive a�� we want students to be able to challenge themselves and if they take the test they have to meet the requirements,” Annear said. However, RHS not having a test does not make the program any easier.
Students would be restricted in their education if they were forced to test into IB or AP programs. We, as students, need to be able to challenge ourselves. We deserve to be able to choose to push ourselves in these high-level courses and grow as students.
Former AP teacher and current IB English teacher Anne Elhers said, “I don’t think we need a test to get into a�� [IB and AP]. I think that kids who want to take a challenge with parents who are willing to support kids and teachers who want to encourage kids is the way to go when it comes to IB and AP.”
Students need the opportunity to take IB and AP courses and fully develop their brains for college. They need to be able to choose a more rigourous education so they can learn and succeed not only in high school, but also later in life.