Superintendent to Resign After Pressure from Board 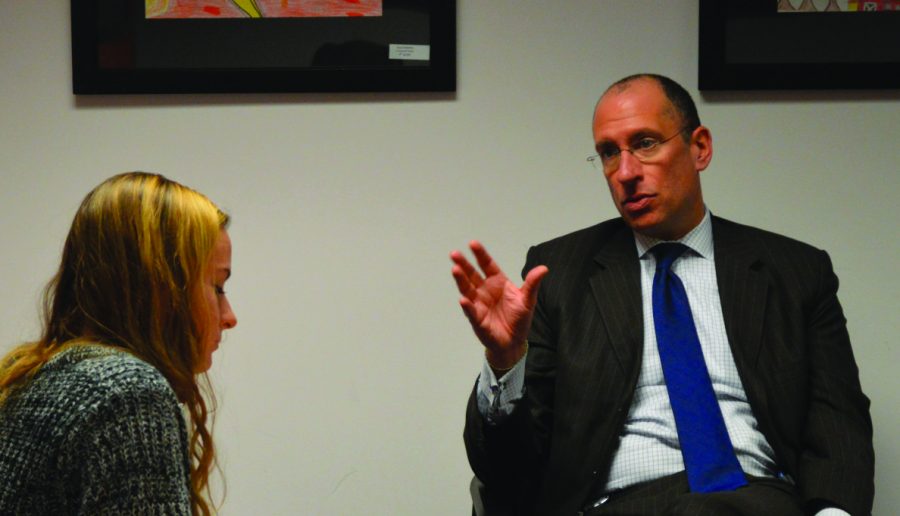 Superintendent Dr. Joshua Starr sits down for an interview Nov. 13 with Rampage Editor-in-Chief Greta Anderson. Dr. Starr will step down from his position Feb. 16. --Meklit Bekele

Although Superintendent Dr. Joshua Starr’s four-year contract expires in June, he is resigning from his position effective Feb. 16.

The Feb. 3 announcement came soon after the publishing of the news reports that at least four members of the eight-member board were not going to vote for him to have his contract renewed. Dr. Starr would have needed at least five votes to remain the coun ty superintendent.

The Board has decided that MCPS chief operating officer Larry Bowers will be come the interim superintendent until the end of the 2015 school year, starting Feb. 16. The Board will form a search committee to find a new superintendent for the 2015-2016 school year.

Patricia Oa��Neill, MCPS Board of Education President, said in a message, “We be lieve that Bowers is well-suited to lead the district in this time of transition a�� he understands our culture, our strengths and our needs.”

Although the four members who voted against Dr. Starr have refused to reveal their identities and motives, calling it a “personnel matter,” many believe that it is because he did not provide a clear plan to close the achievement gap between white and minority students.

However, according to Valerie Jones of the Washington Post, it is not as easy to close the achievement gap as one may think. “There is no single thing any superintendent can do to close the gap. There is no silver bullet,” Jones wrote in a Jan. 30 article.

In a message to staff, Dr. Starr wrote, “There is an increase in the percentage of students who are graduating on time and a narrowing of the [achievement gap]. But there is much work to be done.”

Despite the statistics supporting some of Starr’s achievement gap success, there have been some questions from the members of the Board in respect to Starr’s leadership style. Although he has worked towards closing the gap, some feel that he has not done an ample job of communicating his plans to continue this trend for MCPSa�� future.

In addition, the county has criticized Starr’s decision over whether or not to change the bell schedule to an earlier time and the way administration has handled sexual abuse issues that have occurred on multiple MCPS school grounds. He also received criticism for the record high number of students failing their math final exams.

Although Starr, whose base salary as superintendent is $264,002, will be out of office on Feb. 16, he will receive payment throughout the rest of the year.