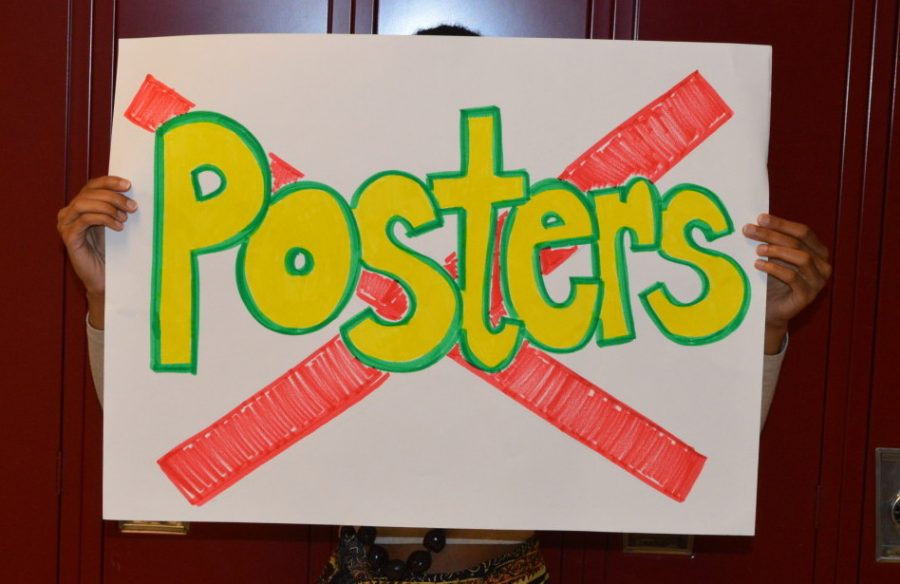 Club posters plastered throughout RHSa�� hallways have been a common sight over the years. But this year, in an effort to conserve paper and keep the school looking professional, administration has specified new designated areas for posters to be hung.

Now, posters can only be taped up in the second and third floor rotundas above seating areas, or in the second floor alcove across from the vending machine which differs from the areas last year.

“My primary concern is to be more mindful of the amount of paper that we are using,” principal Billie-Jean Bensen said. “People were just spitting out reams of 8×11 sheets of paper and posting them everywhere in the school.”

Another concern, albeit more minor, was the damaging effects of taping posters on windows and painted walls. At the end of last year, Bensen had to put in requests at the county level to sand walls and scrape off paint and tape left by posters.

Junior Courtney Herzog, a senior managing editor of Echoes literary magazine, did not know about the new rules when her club was crafting posters.

“It definitely set a damper on things,” Herzog said. “We have to be strategic about where we put our posters; it’s something we have to adjust to like everyone else.”

As a new method of spreading club information, Bensen proposed putting TV monitors in the hallways to better use by displaying club information on a loop as students walk by. A new flat-screen TV has been purchased for the counseling office, and school administration is still debating the best location for a 50-inch screen yet to be installed. This would allow for messages to be seen by students as they walk.

“I [don’t] want to stop information flow,” Bensen said. “I certainly don’t want to be the “poster police,a�� but I want Rockville to look a�� like a high school of higher learning.”

English teacher Sean Pang, who has been at RHS for four years, is the club sponsor for Echoes, Asian-American Club, Ultimate Frisbee Club and Anime Club. He mentioned that administration is also keeping closer track of club membership and extracurricular eligibility.

“This is the strictest I’ve seen it. I don’t like it personally, but I can see why they do it,” Pang said.

Each club is also supposed to submit a roster of its members after the first meeting. While Bensen said this was supposed to happen in past years, this is the year that the rule is truly being enforced.

“A piece of it is eligibility, but a bigger picture is what percentage of our kids are active a�� who’s involved and what clubs are popular and all kinds of data that the county keeps,” Bensen said.

While the rules have definitely changed how the school looks, Bensen believes it is for the best. “It’s not that I want the school to look bare by any means,” Bensen said. “I’m just looking to keep Rockville beautiful.”