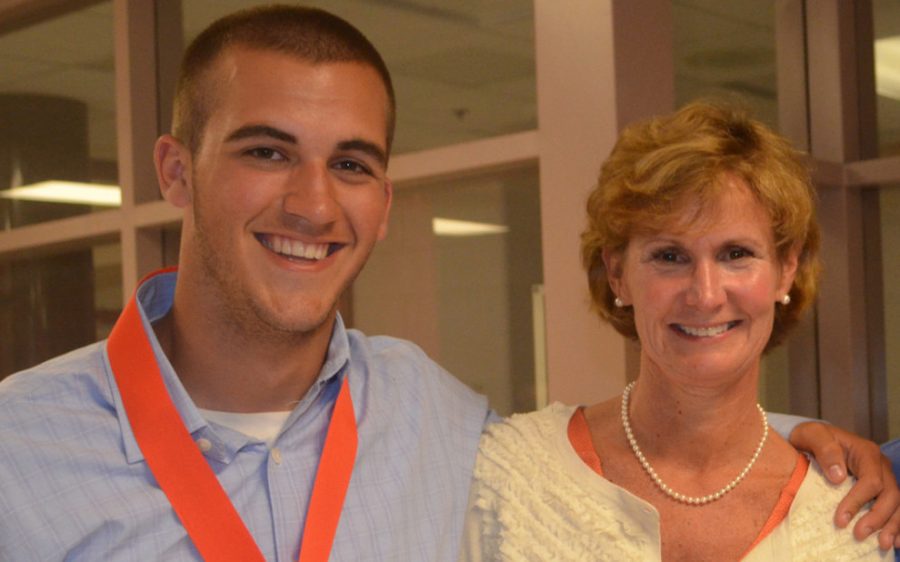 Principal Billie-Jean Bensen poses with alumnus Tyler Reed (2014) after this year’s Senior Awards Ceremony May 22. Bensen was the second principal for the class of 2014. --Camila Torres

Interacting with administrators, conversing with students in the halls and observing the hustle and bustle of school events: all in a day’s work for principal Billie-Jean Bensen.

“The comradery and the community feel in this school is a�� very different, and it’s just so special,” Bensen said. Before Bensen joined RHS this year, she worked in the district as both an administrator and a teacher. She was also Executive Assistant to the Chief School Performance Officer in the Office of School Performance for two years.

Bensen spent her time observing and learning about the RHS community, an approach that many teachers appreciate, including science resource teacher Mark Agnew.

“That’s a very wise thing to do when you’re coming into a new situation. You want to make the decisions that need to be made but at the same time, making decisions without knowing the school or how things work is probably not the best way to do it,” Agnew said.

Students have also noticed Bensen’s different approach to leading the school, especially in dress code enforcement. “I think that under the new administration that [Bensen] established, [she] enforced the rules a little more freely [than] Dr. Munk [did],” sophomore Hong Tu said.

The principal’s leadership style varies slightly from her predecessor Dr. Debra Munk’s. “I think that because this is her first year, she’s more apt to inquire as to how things have been done in the past, so [the staff is] more inclined to discuss and explain. [We] give her a context before she makes a decision,” Assistant Principal Galit Zolkower said.

One of the new changes Bensen is introducing is new computer course called Code, which intends to introduce students to computer science.

“I think adding the new computer course is great [because] we didn’t really have any courses in that area,” Bensen said.

In addition, this upcoming fall Bensen intends to make the IBCC program available for students. The IBCC is a component of the IB program that allows students to take a career program such as PLTW or child development classes while still taking IB courses. Additionally, some IB classes on the master schedule have been combined, making it easier for students to enter both IB and AP classes.