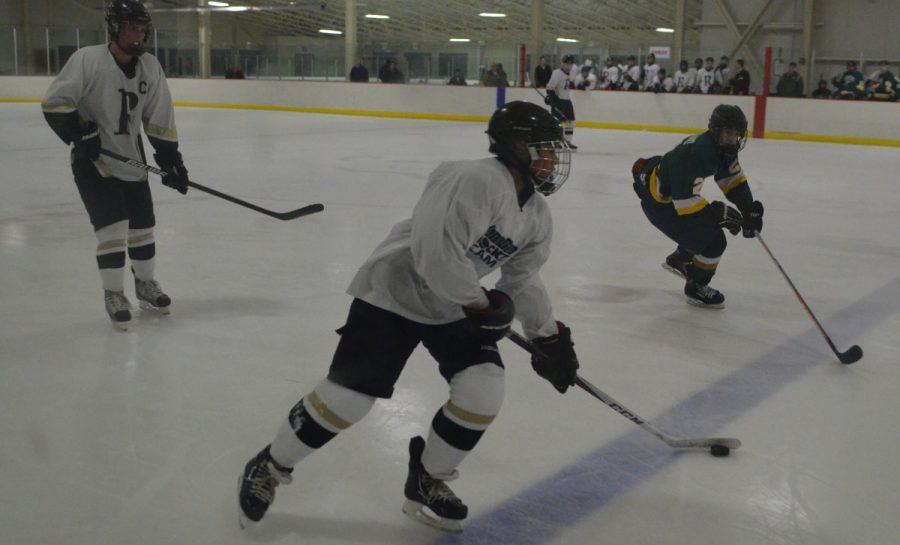 Freshman defenseman Koby Kovacs pushes the puck up the ice in the team’s season opening 10-0 victory over Damascus HS Nov. 15. Kovacs is a young player who looks to lead the team in the future. --Adam Bensimhon

With a new coach, the Rams’ varsity ice hockey team came out with fire at their first game on Nov. 15 against Damascus HS, with a 10-0 victory.

Leading scorers of the game were senior captain Lucas Flavell and junior Justin Flavell with three goals each. This will be the third and final season the brothers will play together on the same team.

“We have good chemistry out on the ice and seem to always find each other at the right time,” Lucas said.

Saturday mornings, the brothers help out at Cabin John Ice Rink with the Montgomery Cheetahs Special Hockey team made up of kids with developmental disabilities. Justin and Lucas are humanitarians wanting to give back to the community by teaching the game of hockey and sportsmanship.

The team took a rough 8-3 loss against the D.C. Stars Nov. 22 despite strong performances from freshman Koby Kovacs and Justin.

The new team, with a 1-1 record, is led by senior captains Steven Nagiel and Lucas. It is composed of students from four other high schools including private schools The Heights, McLean and St. Andrews, as well as Magruder.

The previous season included students from Richard Montgomery HS, but a large number of players have left the alliance to make their own team.

With a 20 player roster, the Rams have plenty of depth and all of the players can meet the expectations set by the new coach.

“We haven’t lost much talent coming into the season and look to make it deep in the playoffs,” Nagiel said.

One standout player to look out for this season is senior goalie Greg Walzer. This was Walzer’s first varsity start and he set the bar high by keeping Damascus off the scoreboard. Nicknamed “The Greg Wall of China” by his teammates for his stopping force in the net.

Walzer is expected to be a crucial player for the team this season.

New coach Mike Gifford is determined to have a successful season. “They have so much talent, it would be shame to see it go to waste,” Gifford said.

According to the team, practices are run much more seriously this year due to their belief that they can make this season successful if they put the effort in.

Freshmen Koby Kovacs has great potential for upcoming seasons. Although he is only 5a��3a��a��, Kovacs firmly stands his ground on defense and is completely fearless going up against juniors and seniors who have significant height advantage on him.

The team is supported by “The Inferno” which brings fire to the icy arena. “It’s not a hard sport to understand and it’s a fun spectator sport,” junior Joey Lynch said.

Crowds of students line up against the glass behind the opposing team’s goalie and cheer on the offensive linemen when they are attacking. Becasue hockey is such a physical contact sport, it’s easy for fans to get very enthusiastic about the action happening right in front of them on the ice.

With such an experienced team, the thought of a deep playoff run is in the back of the minds of players. The team faced off with Blake HS Dec. 6. They won 5-2.