As Election Day Nears, Some Republicans Hope for Alternative 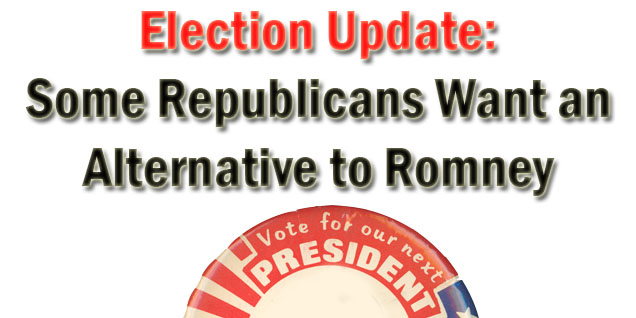 Election Day is only six months away and the race between President Barack Obama and Former Mass. Governor Mitt Romney is starting to heat up, but is it too soon to assume that Romney will be the Republican nominee?

Right after Rick Santorum dropped out, almost every news organization declared Romney the “presumptive nominee.” Recently, no candidate has reached the number of delegates needed to win the nomination. Even though Romney is far ahead in the delegate count, there are several states that are still in the process of selecting delegates.

Even though the media reported that Santorum won states like Minnesota, Paul will win most a majority of the delegates in those states, Santorum won the popular vote in Minnesota, but after the initial voting when most of Romney and Santorum voters went home, Ron Paul supporters stayed at the polling stations and became delegates. In April during the Congressional District Conventions, Paul received 20 out of the 24 delegates available. The remaining 13 will be selected May 19.

There are also about 15 states left that still have not held a primary election. The states that could decide the nominee are Texas and California. Texas has 155 delegates and California has 172 delegates. Texas has held local conventions similar to Minnesota for the past month. Again, like in Minnesota, Paul supporters may have taken most of these delegate slots.

Even if Romney does become the nominee, he will have to choose his running mate carefully. In 2008, Arizona Senator John McCain chose Sarah Palin has his VP in order to gain women voters. When Palin was criticized for her “lack of knowledge”, President Obama took the lead in the weeks prior to the election.

Romney and President Obama have their differences but there are many issues they share the same position on. Both of them support endless wars overseas, big government and killing suspected terrorists without a trial. Both are funded by the same groups: Goldman Sachs, Citigroup and Bank of America. Romney’s healthcare plan passed in Massachusetts was the blueprint for the President’s Affordable Healthcare Act.

There is still an alternative to President Obama and Romney. Americans Elect, a non-profit organization is selecting a candidate to run against both of them in the general election. They are trying to get on the ballots in all 50 states but currently are only on 22 states.