Competition May Be Unhealthy for Students 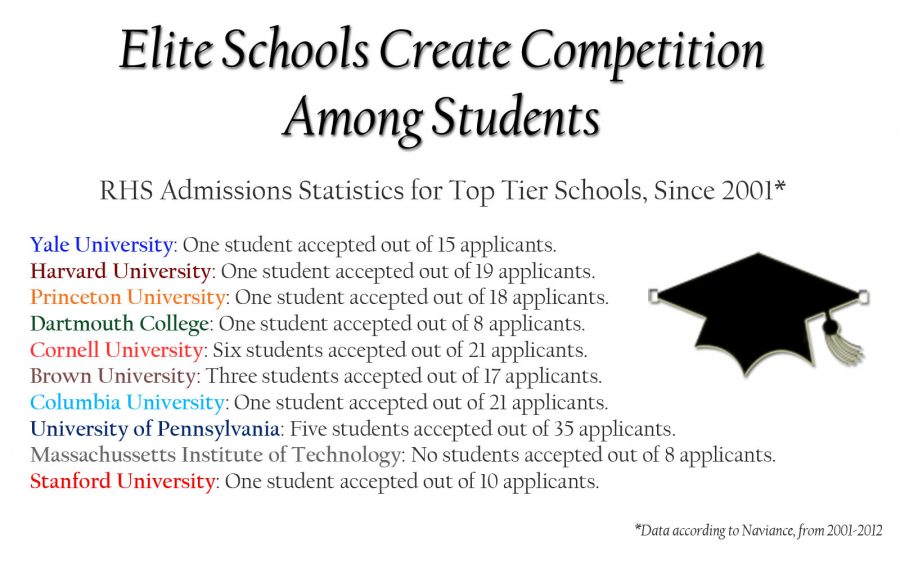 On college applications, students try to emphasize their best attributes. The highly competitive college admission process, however, may be bringing out their worst.

Competition has always been part of the high school experience. Yet it seems to reach new levels when it comes to gaining admission to prestigious colleges a�� even at the expense of one’s self-esteem, success and friendships.

“Names like Harvard, Princeton and Yale create a standard that separates honor students from the exceptional students,” said senior Ailyn Ferrebu. Over the last ten years, 154 RHS students applied to an Ivy League school. Only 19 were accepted, according to Naviance, a college admission website popular with students.

With the odds so low, it is no surprise that students stress themselves out to achieve perfect SAT scores, flawless GPAs and exceptional r sum s. Students often make these statistics the topic of conversation – so they can scope out their competition or brag about their own strengths. “There’s always a sense of feeling dumber than your peers,” said senior James Jiang.

Psychologist Alfie Kohn acknowledges that self-esteem is a common casualty of competition in his book The Case Against Competition. Kohn cites studies that show that feelings of self-worth have become increasingly dependent on external sources of evaluation. Poor academic performances and increased hostility are also common effects that many students encounter in the nearly impossible pursuit to be the best.

These effects have worried new MCPS Superintendent Dr. Joshua Starr, who has discussed his goal of reducing the “fierce competition” that exists among students in the school system. MCPS has already taken steps to relieve students of some of these pressures. Unlike most school systems, it does not rank students in terms of their GPAs, and teachers are discouraged from giving extra credit to students to help boost their grades.

Still, some believe that a little competition can be healthy. “Competition is a way of life,” said senior Chris Salzano. “Without it, we’d be bored.” Some say that healthy comparisons among peers may motivate students to work harder.

Perhaps the key is finding a medium a�� where students can push themselves to their full potential without sacrificing their happiness. “There needs to be a balance,” said Ferrebu. “While competition can drive students, no one should feel like they’re not smart enough because they’re not applying to an Ivy League school.”