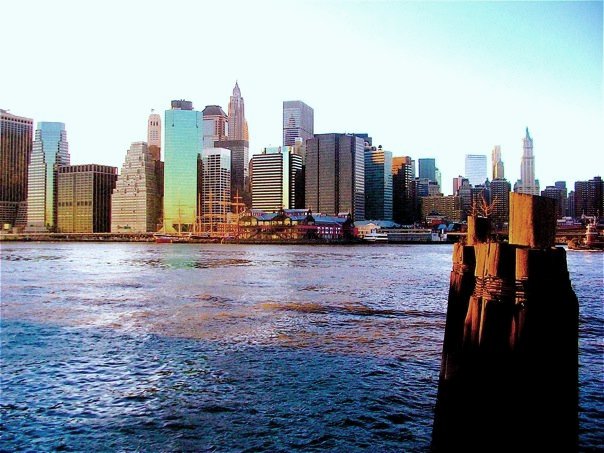 The current New York skyline from Brooklyn Heights, NY. In 2001, the Twin Towers were a part of the skyline. In 2014, One World Trade Center will be. -- Courtesy of Hadley Cooney.

For English teacher Carrie Vieira, who attended high school only four blocks from the World Trade Center, the Sept. 11, 2001, attacks hit too close to home.

Vieira was born and raised in New York City. At the time of the attacks, however, Vieira was attending college in upstate New York. She remembers waking up to the bad news when her roommate began banging on her door and screaming, “We’re at war.” Vieira quickly turned on the news just as the second plane was hitting the South Tower. “I immediately woke up to a feeling of anxiety and confusion,” she said.

When Vieira was in high school, the World Trade Center was a fixture for her and her classmates. “[It] has a special place in my memory,” she said, recalling that when the weather was nice, she and friends would go eat lunch on the plaza outside the twin towers. Now, her lunch spot was being destroyed as Vieira watched the horror unfold on television.

Her parents and sister were still living in New York at the time. Vieira was unable to get in touch with them the day of the attack due to heavy phone traffic. Three days later, she drove back to the city to be with her family.

When she arrived, smoke was billowing everywhere, streets were closed off and debris was still flying in the air. “The heart of the financial district a�� is normally so busy and bustling. There was just this quiet somberness cutting through it all,” she said. “It was very profound.”

Ten years later, Vieira, who frequently returns to New York City, is glad that the city she grew up in and its residents are finally moving on. One World Trade Center is now under construction with plans to open in 2014. “For those of us who knew the skyline so well, [we] could see a hole,” said Vieira.

“But I think now we’re starting to recreate that skyline and move on, because that’s what everyone has to do.”