Unprecedented Decrease in Teen Drug Use Since COVID-19 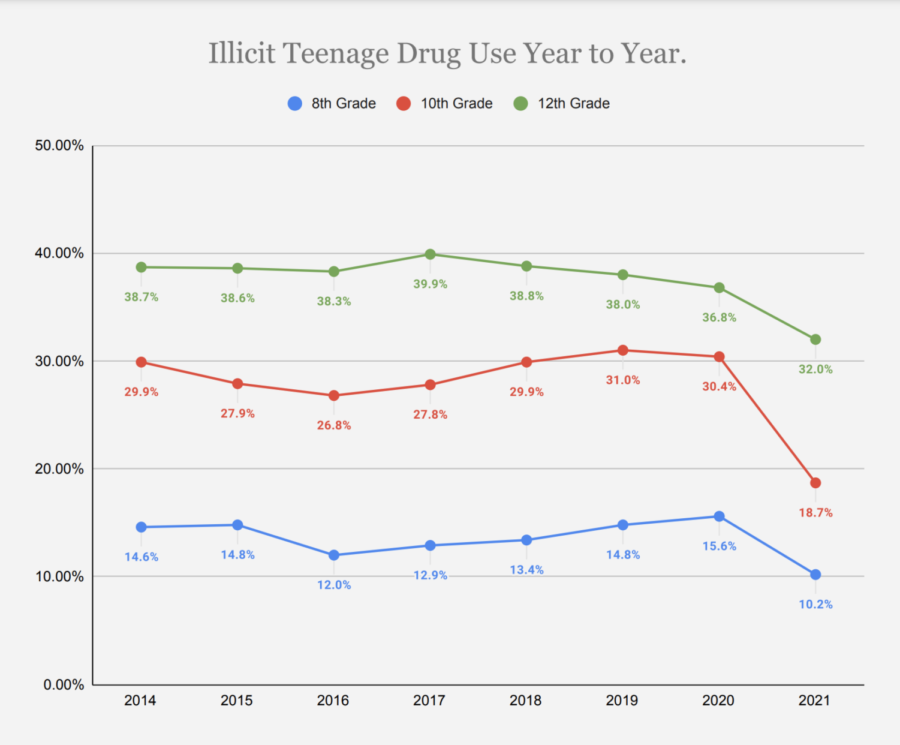 Have high school students been engaging less with drugs during the pandemic? According to the National Institute on Drug Abuse (NIDA), teenage drug use has decreased by an unprecedented amount in the past year.

NIDA conducts the Monitoring the Future survey every year, which is given to 8th, 10th, and 12th graders who report their use of various drugs over the past 30 days, the past year, and throughout their lifetime. They also report the perceived harm, availability, and community disapproval of using drugs. This year, 12th graders reported a 4.8% decrease in illicit drug use. 10th graders went down by 11.7%, and 8th graders by 5.4%.

“These findings represent the largest one-year decrease in overall illicit drug use reported since the survey began in 1975,” NIDA director, Dr. Nora Volkow said in an article titled “Percentage of adolescents reporting drug use decreased significantly in 2021 as the COVID-19 pandemic endured,” which was published by NIDA.

Even with this decrease in drug use, some RHS students are caught off guard by the data, assuming the rates would have spiked in the other direction.

“I thought that because of the increase in external stressors — Covid, political unrest, having to go virtual, etc. —  more students would have turned to drug use as a way to cope,” junior Phoenix Furtado said.

With the added stress, anxiety, and isolation of the pandemic, many wonder how the rates of drug use went down.

“I think people would have had less access to drugs and like peer pressure wouldn’t be as large of an issue when people aren’t around their peers as often,” said one senior, who wished to remain anonymous. “Also, students were around their parents more, so even if they could access drugs, they would have been less likely to get away with it.”

This being said, overall, RHS students didn’t seem to notice the decrease at school.

“I personally notice more drug use now than I did before,” Furtado said. “At the very least, I notice an increase in willingness to do drugs and also an increase in discussing the use of drugs.”

“Nothing has really changed here.” Another student added.

While it is unfortunate that the shift wasn’t noticed by students, it still does not necessarily mean that the shift is not occurring. Hopefully, within the next few years, teen drug use will continue to decline.

“Moving forward, it will be crucial to identify the pivotal elements of this past year that contributed to decreased drug use – whether related to drug availability, family involvement, differences in peer pressure, or other factors – and harness them to inform future prevention efforts,” Volkow said in her article.