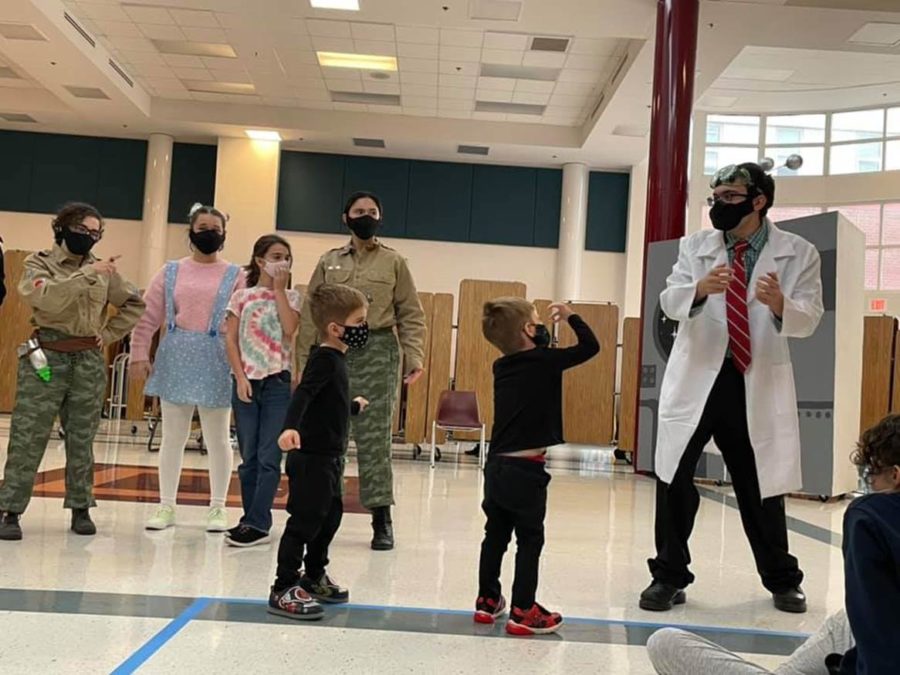 Junior Bryan Ribeiro involves the audience in the second show of the day, "Star Trip." Other cast members, including Phoenix Furtado, Miranda Verity, and Julia Feller also appear in the scene.

This year’s fall Rockville drama club fall production features two short children’s plays about  the beautiful mysteries of extraterrestrial encounters. You can experience the plays on Nov. 20 from 10 a.m. to 4 p.m. on a loop.

The play’s will be performed on an alternating schedule during the time frame. One is called Close Encounters in the 3rd Grade which follows the story of a little girl who was trying to complete her homework when aliens land in her schoolyard. The second is  Startrips, which follows a trip to space to bring back martian rocks. Startrips features an interactive element to encourage audience participation.

In a unique twist, this year’s play will be performed outside in the RHS bus loop. If weather concerns arise, the play will move indoors to the cafeteria.

Having the play be outside will be a major adjustment for actors, stage crew, and the directors.

“We’re trying to stay more covid safe, so we thought it would be more fun to perform outside,” said producer and English teacher Dana Sato.

Due to the play’s outdoor location, the audience will be charged by the car, and there will be designated spaces for families to sit together and watch. The time schedule of the play will also be different this year.

“ So the plan right now is to do one show. Take a little break, maybe 15-20 minutes and then start the next show,” Sato said.

The cast includes between 30 and 35 students, with 5-8 actors per play. The stage crew and actors will also wear masks while in close proximity during rehearsals as well as actors wearing special masks while performing.

“The county has also provided what is called performance masks, which are designed to better help with the microphone situation,” said Sato.

Rehearsals for the play started on Nov. 7 and have also been held outside for the safety of students and staff.

“To be honest it’s extremely difficult,” drama club member Julia Feller said. “Not only due to us doing two children length plays but also having the production take place outside.”

While the actors have worked on learning their scripts and perfecting their lines, the stage crew has worked hard to bring the play to life.

The costume crew found or made the costumes for the actors, and the sound crew found a way to make it work outside with no sound system installed other than the sound board brought from the auditorium. Due to the daylight showtime, a lighting crew has not been necessary.

The RHS  drama club is excited to be back and performing again for their peers and in front of a real audience again.

“My proudest moments are when that final curtain goes down and see what we accomplished; how far we’ve come since we started. It’s always bittersweet, but pretty cool to see it come together,” Sato said.