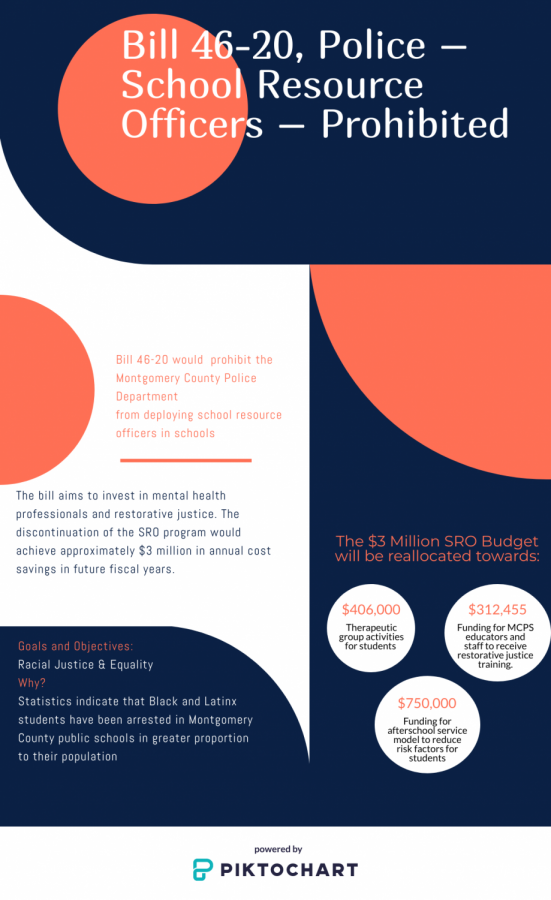 The Montgomery County Council held a public hearing Feb. 4 regarding the proposal of  Bill 46-20, which prohibits the Montgomery County Police Department from positioning police officers in MCPS high schools. The bill received an outpouring of support from students and student-led activism organizations.

The School Resource Officer (SRO) program is an initiative that places sworn law enforcement officers in schools. MCPS and the county police department began the program in hopes that students would develop rapport with local law enforcement. One resource officer is assigned to each of the 25 high schools and at one alternative learning school in Montgomery County.

Bill 46-20 proposed that the SRO program’s $3 million budget be reallocated to an after-school student service hub to reduce risk factors for students ($406,000), recreational therapeutic group activities for students ($312,455) and restorative justice training for MCPS educators and staff ($750,000). In addition, the proposal addresses student’s need for therapy and the ratio of students to mental health professionals in schools.

Over the last four years, almost half of SRO arrests were of Black students, a population that makes up one-fifth of MCPS students (Maryland Public Schools Arrest Data 2015-2019).

“There are disproportionate rates of suspension and expulsion for Black and Latino students. These disparities highlight the concerns of the school-to-prison pipeline,” Caroline Sturgis, a representative for the county executive, said.

Along with the concerns over racial inequality, there has been a large push for school systems to assign more trained mental health professionals and therapists in schools.

The Maryland Safe Schools Act requires that there be “adequate law enforcement coverage” in all high schools. In order to adhere to the act, Bill 46-20 suggests that the school’s assigned SRO “check-in with their assigned schools at least once during their workday; patrol the areas around their assigned schools and respond to calls for their services after school,” Sturgis said.

The Montgomery County Association of Administrators and Principals (MCAAP) pledged their full support to preserve the SRO program Dec. 1, 2020.

In response to the MCAAP, MCPS staff members issued the “Statement on SROs by MCPS Staff and Administrators” to “respectfully disagree” with the MCAAP’s stance, instead supporting the student organizations who are working to have the SRO program removed.

Student-led organizations like Moco4Change, SGA-MCR, Minority Scholars Program chapters, and many more have been at the forefront of the movement to remove SROs.

RHS principal Billie-Jean Bensen was one of several administrators interviewed by Bethesda Beat about keeping SROs in schools. According to the Jan. 11 article, some principals say “many of the people advocating for its end ‘haven’t had any problems personally.’ ”

“[The principals are] basically saying we don’t have a problem because we haven’t seen anything serious happen in our own school,” said senior Jesus Escobar. “I feel like [they’re] saying we should wait for a tragedy to occur to take action instead of tackling it with a preventive approach.”

While the main objective of the SRO program is to help students build rapport with law enforcement officers, there are a number of students who have never had any interactions with the SRO at RHS.

While never having a negative experience, three students said they have never had any experience at all with Rockville’s SRO.

“I’ve only seen the police officer when I leave school, but I’ve never talked or interacted with him,” an anonymous sophomore said.

As a result of the minimal contact between students and SROs, some students would feel more comfortable going to other faculty members rather than the SRO.

“[School systems] keep [SROs] in schools because they think that students form good relationships with SROs, but I bet you half of our school doesn’t even know the name of ours,” senior Gabby Diaz said. “SROs are supposed to be the first people we tell if we suspect something dangerous is occurring, but personally, I’d probably end up going to my teacher or counselor.”

SROs carry the same equipment they’d have on any other law enforcement assignment, including firearms. Students expressed their discomfort in seeing an armed police officer in their hallways.

Escobar’s feelings about the presence of SROs are similar.

“Having a person with a gun walking around our school does not make me feel safer. It feels unnecessary since we already have security,” he said.

While SROs have the ability to make a positive impact, the demeanor of an officer determines the environment they create and how students feel towards them.

“One of [the SROs] came and chatted with my class regularly. He was part of our community,” Byrne said. “I have always felt that our SROs are an important and positive part of the community—it really helps them and us if the SRO is an outgoing, social person.”

Although SROs are trained on implicit bias, disability, and diversity awareness, with special attention to ethnic and racial disparities, students do not believe that this training is working.

“Whether people know it or not, everyone has their own implicit biases,” Diaz said. “I do not think that training is working if Black students are nine times more likely to get arrested than their white peers.”

An opinion among students and staff is that the SRO program cannot remain the same and that a choice should be made to reform or abolish the program.

70 percent of the RHS demographic are minorities and, for them, a “police presence in a school can be intimidating. The culture of policing needs to shift so that police are advocates of black and brown students—not adversaries,” Byrne said.