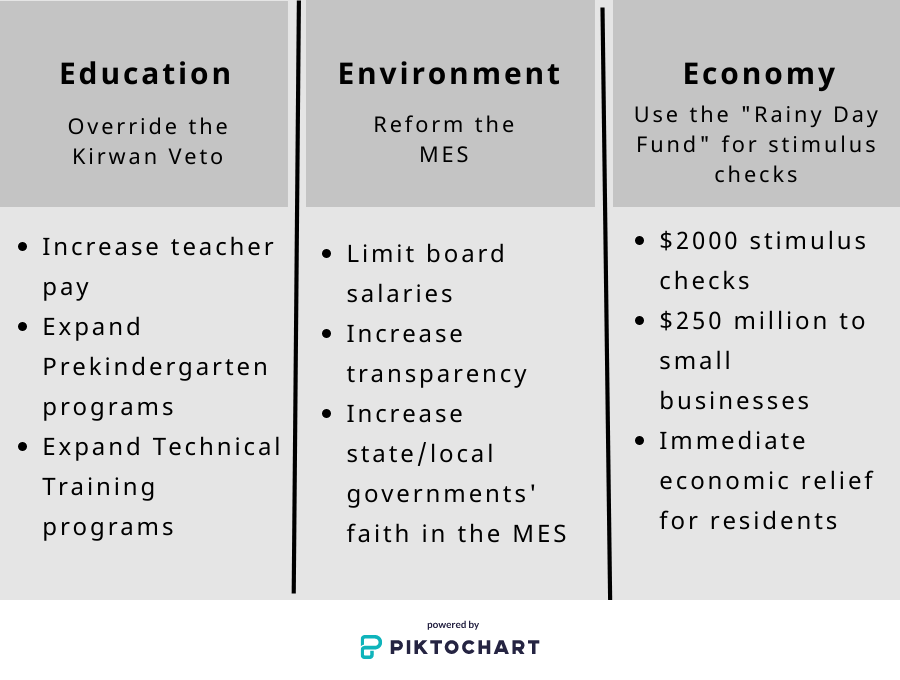 During the 2020 legislative session, the Maryland State Assembly took major steps towards finalizing legislation that will protect the environment, improve public schooling and boost the economy.

The decreased revenue from the economic recession and handling the COVID-19 pandemic will take center stage during the 2021 legislative session, but they can still take steps to build off of last year’s progress.

This year, the State Assembly should take the following actions to continue its previous work on the environment, education and economy.

Last year, the Maryland Environmental Service (MES) came under close scrutiny for alleged lavish spending on the part of the agency’s former director, who received a payout of $238,000 when he left the agency to become Governor Larry Hogan’s chief of staff.

Sponsored by Montgomery County Delegate Mark Korman, the Maryland Environmental Service Reform Act would increase the transparency of the MES and set limits on salaries for its board members.

The State Assembly should pass this legislation so tax dollars paid for protecting the environment will be spent on preserving nature, not lining the pockets of board members.

According to a Dec. 31 article from the Baltimore Sun, contracts with state and local governments compose roughly 95% of the budget, meaning that the $238,000 payout was funded almost entirely by tax dollars.

Passage of Korman’s bill would ensure greater transparency for the MES, allowing legislators and taxpayers to confirm that the tax dollars sent to the MES are geared towards Maryland’s environment. Furthermore, the increased transparency from the MES will give lawmakers the confidence necessary to invest in environmental projects.

In 2020, the Maryland State Assembly passed a major educational reform plan known as the Kirwan Education Plan. Among its provisions are an increase in teacher pay, an expansion of prekindergarten programs and an increased emphasis on technical and career training. Due to his opposition to the necessary increase in taxes, Governor Hogan vetoed the bill in April 2020.

However, considering the massive benefits that the plan would have for students and educators in the state, the State Legislature, which has a veto-proof majority in both houses of the legislature, should override the veto.

In addition to the initial educational benefits, the technical training that is provisioned for in the Kirwan Plan would be a massive benefit to Maryland companies and thus the state’s economy. Moreover, the expansion of prekindergarten programs would help decrease the educational opportunity gap between economically-advantaged and disadvantaged students, again benefiting the state’s economy in the long-run.

Maryland Comptroller Peter Franchot recently proposed that Maryland tap into its “rainy day” fund in order to provide Marylanders with $2,000 stimulus checks and to provide $250 million to Maryland small businesses.

This proposal should be seriously considered by the legislature as part of the Maryland economic stimulus plan. Maryland has been reeling from the economic downturn caused by the COVID-19 pandemic and this would massively benefit Marylanders and Maryland small businesses.

By putting money into the hands of Maryland residents, there is a greater chance that people will have the capital resources to spend that money at Maryland stores, restaurants and other struggling businesses. Economic downturns like this are the exact reason why the “rainy day” fund exists. It is time to use that fund to help Maryland residents and businesses push through this difficult time