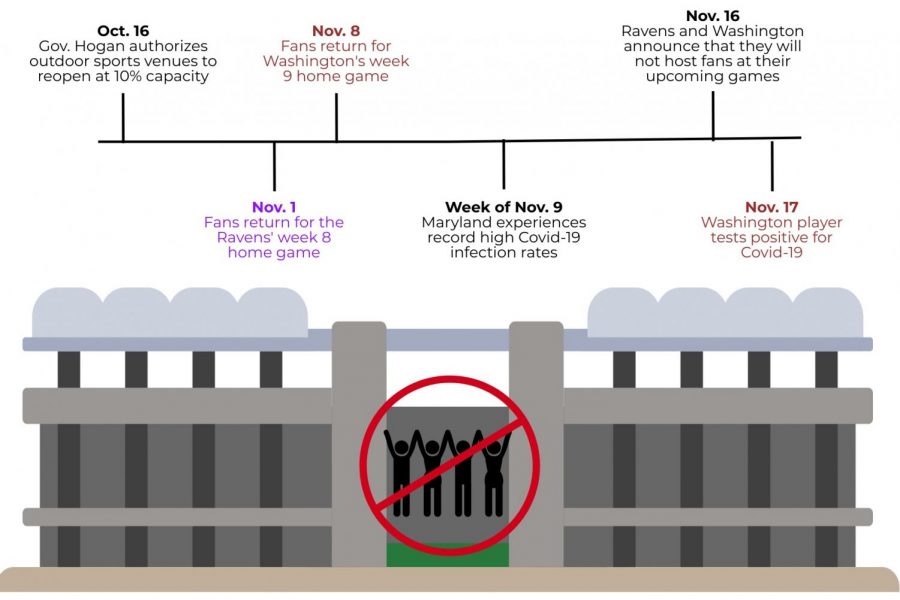 Rising rates of COVID-19 in Maryland will prevent fans from attending Baltimore Ravens and Washington Football Team games, after a brief return in Weeks 8 and 9 of the NFL season.

“With our key health metrics low and stable, we are taking steps to allow more spectators… to safely attend games,” Hogan said on twitter Oct. 16. “It remains important to continue following all of the mitigation measures and public health protocols that keep us safe.”

M&T Bank Stadium opened to fans Nov. 1 for the Ravens game against the Pittsburgh Steelers, where about 4,300 fans were able to attend. It was a large increase compared to the 250 family members of team personnel who were allowed to attend previous games.

FedEx Field also hosted about 3,000 fans for Washington’s game against the New York Giants Nov. 8. However, the stadium is only open to season-ticket holders, excluding the general public.

The limited number of fans in attendance at both games were required to wear face coverings and practice social distancing, while tailgating was prohibited.

However, with COVID-19 rates rising throughout Maryland, each county is tightening restrictions once again. The Ravens decided not to host fans for their game Nov. 22, while Washington—dealing with a player who tested positive for COVID-19—similarly chose to close their doors to fans.

Hogan opened stadiums to fans because of low and stable COVID-19 rates in Maryland, so with rates once again spiking, senior Yianni Panagiotopoulos expected the stadiums to close in response.

“I liked the choice to bring fans back. I thought it would make the games a little more fun and a little more normal, even just watching at home,” he said. “But I realize with coronavirus starting to get bad around here again, they can’t keep letting fans in.”

The Ravens and Washington have not announced any plans to bring back fans again, remaining unclear when, if at all, fans will be able to return this season.

“I watched [the Ravens] game when fans were let in and I didn’t feel like it made any difference,” senior Dylan Cossette said. “I want fans to come back, but until stadiums can be full again, it’s not worth it.”