Movie Review: ‘Sonic the Hedgehog’ Speeds into the Box Office 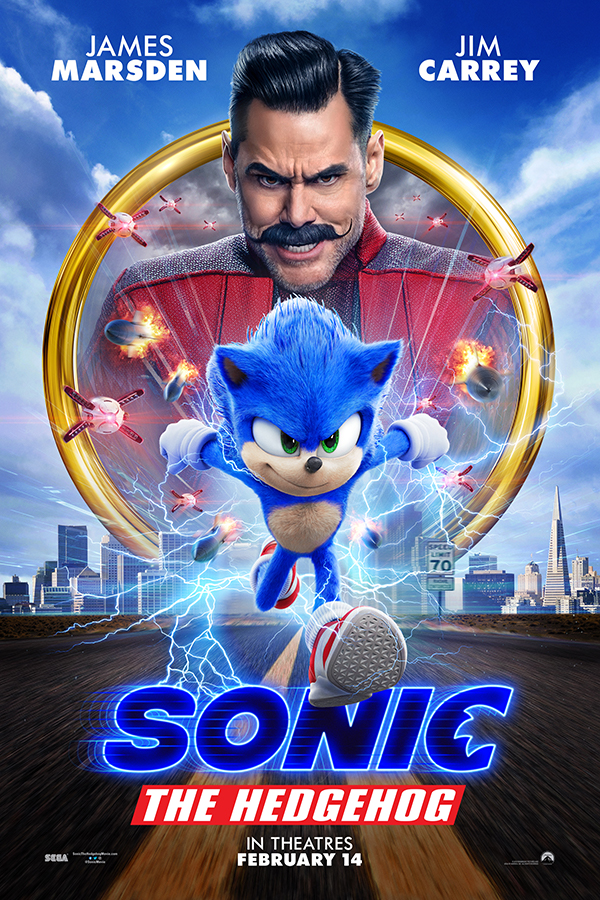 "Sonic the Hedgehog" brings a new sense of humor to live-action comedy films and will be enjoyed by anyone in the family.

Paramount’s “Sonic the Hedgehog,” starring Ben Schwartz as Sonic premiered Feb. 14 and has brought in $306.7 million worldwide and $146.06 million domestically so far. Based on characters in Sega’s worldwide hit video game franchise, “Sonic the Hedgehog,” the film is a fun-filled experience that any audience member might love, ranging from a young nine-year-old to the typical working-class adult.

“Sonic the Hedgehog” is a live-action adventure comedy whose primary focus is on the iconic brash blue Hedgehog. The film follows Sonic’s journey and misadventures as he navigates the complexities of life on earth with his new human best friend, Tom Wachowski, played by James Marsden. Sonic and Wachowski collaborate in attempts to stop the villainous Dr. Robotnik, played by Jim Carrey, from catching Sonic and using his formidable abilities for regional hegemony.

Beyond Sonic and Robotnik’s primary characters, the film introduces a new character, Wachowski, who appears as a father figure to Sonic. When Sonic was unable to use his powers in multiple scenes in the movie, Wachowski protected Sonic.

Throughout the film, Wachowski was able to introduce satirical humor because unlike most comedies in the genre, he uses cynical humor and instead only age-appropriate humor and straightforward jokes. “Sonic the Hedgehog” didn’t hold back and had free-range humor that made the film so much more entertaining.

“Sonic is a great movie that I very much enjoyed. Especially when he [Sonic] says, ‘Uhh… Meow’ because it became a worldwide meme and a funny line to see Sonic the Hedgehog say,” junior Niccolo Bloom said.

Carrey’s performance as Dr. Robotnik was undoubtedly the best part of the entire film. The brilliant performance by Carrey was jaw-dropping as he was able to depict Robotnik as the manipulative and conniving character he was made out to be. Carrey’s dialogue was also astounding; at multiple points in the film, he cries out to other characters in the movie that they are useless and that they cement his place as the villain. This grim humor was a hit among audiences.

“Carrey’s performance was remarkable. It made me even tear up a bit,” junior Aidan Shields said.

In producing the movie, the film creators clearly understood the generational age and the different audiences that would show up to see the movie as there are multiple references to pop culture. Some include the popular dance called flossing, Sonic’s ability to stop time similar to that in “X-Men: Days of Future Past” and “JoJo’s Bizarre Adventure”.

“Sonic the Hedgehog” is a hilarious and witty movie and allowed people to enjoy video game characters on the big screen that many people grew up on. It is quite possibly one of the best video game adaptation movies ever to be on screen.