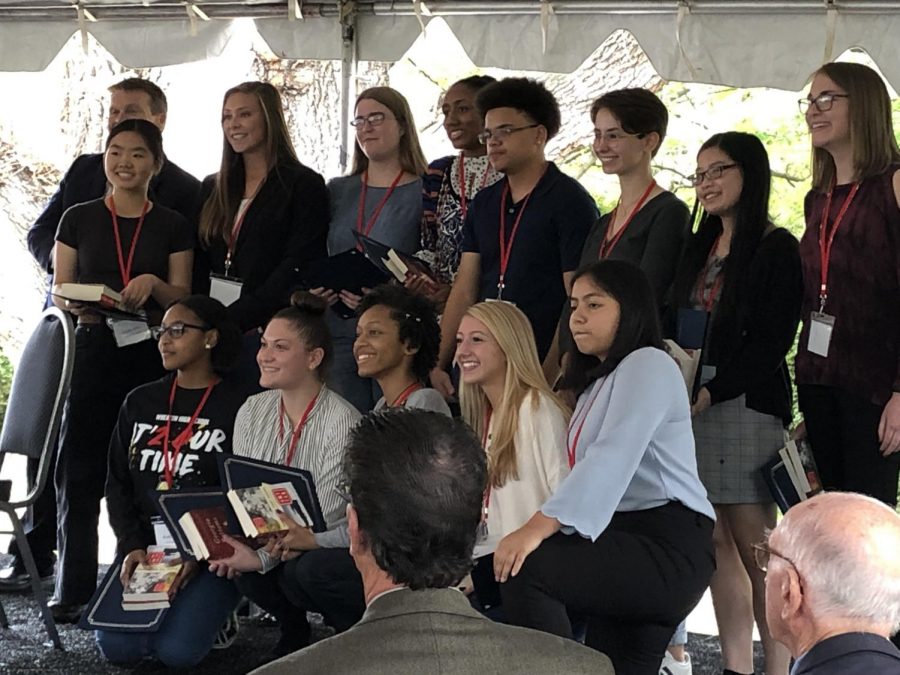 Each of the 13 Fitzgerald Scholars pose with their awards from the festival, which took place Oct. 12 at the Glenview Mansion.

Senior Marissa Hartman and English teacher Anne Ehlers were selected to attend the F. Scott Fitzgerald Festival Oct. 12 at the Glenview Mansion near RHS. The festival is an all day event that includes multiple workshops, films and ceremonies for attendees to experience; it aims to  foster, preserve and promote the skill of writing, as well as provide an accepting and supportive atmosphere for the attendees.

Hartman was recognized for analytical and creative writing. She was nominated by the English department at RHS, specifically her former English teacher Catherine Byrne.

“Young people, well we all do, but in particular young people need not recognition, per say, but affirmation. Someone saying ‘I’ve noticed that you’ve done something really well’, and to provide encouragement. So, I would say anything where we can recognize young people for the work that they are doing, [by] giving them access to an opportunity that otherwise may not have been there,” head of the English department at RHS Martin McCarrick said. “So just to meet Amy Tan, to mingle with like students and like-minded students, I think it’s just a wonderful opportunity.”

To attend the event, a student had to be both nominated as a candidate by teachers at RHS, and invited by the F. Scott Fitzgerald Festival organizers. Students who are interested and show good performance in creative writing are usually the most likely candidates when deciding who to nominate, Ehlers said.

“In terms of our academic curriculum, [the person] would have demonstrated progress in writing and be very proficient in the analysis of the author’s craft, that is eloquent in style, and understanding of the syntactical structure, and how all of that can have a literary effect upon the reader,” McCarrick said.

A student nominated to attend must have a writer’s voice, meaning the persona and the inner person, comes out in the student’s writing. This type of student would also most likely be a reader across the board, McCarrick said.

Attendees had opportunities to go to various reading and writing workshops taught by professional authors. They were able to watch “The Joy Luck Club” film adapted from the book by Amy Tan, the honor nominee, and also had the option to attend and listen to a meeting between Amy Tan and her coworker, Mark Childress. Attendees could get their books signed by various authors— some got “The Joy Luck Club” signed by Tan herself.

“The authors that came in to visit us, Mark Childress and Amy Tan, both got to speak for awhile, and they were both funny speakers, but they also made some big points about identity and work, life, balance,” Hartman said. “There was actually a segment where all they did was talk to each other in front of a crowd.”

Workshops were taught by fiction and nonfiction writers, who in turn taught certain aspects of these genres.

“So, there were both breakout sessions where you could go and talk to an author, and listen to an author,” Ehlers said. “There were also bigger group events where we listened to Amy Tan and another author, and they were talking about how long they had been working together, and what they appreciate about each other, and their own experiences.”

All in all, the F. Scott Fitzgerald Festival was a hit for many of Maryland’s creative writers, students and authors alike.