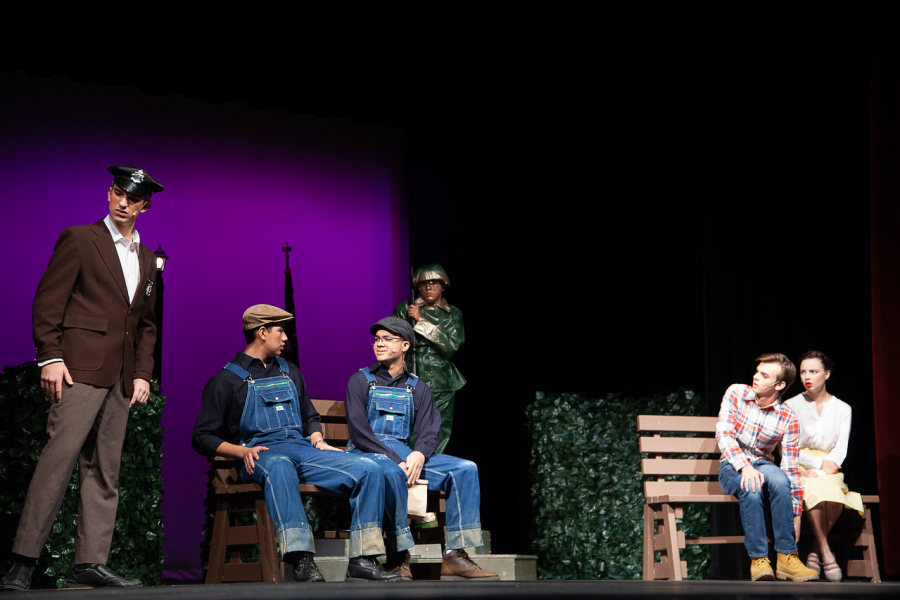 A scene in which the sheriff (Patrick Gallagher) finds two circus boys (Carlos Escobar and Tomar Atzili) and suspects them of committing robberies nearby.

The curtain raised and the lights dimmed as senior Tomer Atzili was illuminated by a spotlight on the corner of the stage, speaking with the sound of a crackling radio behind him. It was the opening night of RHS’ production of “The Panic Broadcast of 1938.”

With a multitude of characters and a somewhat confusing plot, the play was certainly an ambitious choice for the cast. Accompanied by a new directorial team of technology teacher Sean Gowen and paraeducator Mary-Rose Winnard, and produced by English teacher Dana Sato, every member of the cast and crew clearly put a lot of effort and time into the creation of the show.

Actors were generally on top of their lines and they spoke with an understanding of their characters. Visual effects were astounding and the lighting crew deserves accolades for visuals that brought the viewer straight into the show. The set design was simple, but since the play was line-heavy and the stage rarely featured more than five characters, it provided an open atmosphere.

“I feel like everyone was really good. This was my first time actually doing the play and when I saw people perform before I was just like ‘they’re just performing,’ but when I tried to do my performances I realized that it really is hard to act and that all the actors are amazing,” junior actor Ranita Chowdbury said.

In the acting department, seniors Julian Lee and Khalid Alzouma clearly stole the show. Though they portrayed relatively minor characters, they provided some much needed comedic moments and seemed very comfortable with their lines and their characters. Seniors Madison Dieffenbach* and Patrick Gallagher occupied the lead roles, propelling the plot forward through dynamic acting and personal character moments.

However, the play was not perfect. A couple actors had decidedly weak performances, especially when acting alongside Alzouma and Lee. Some had trouble remembering their lines and others were unable to convey the same emotion their counterparts did. While these problems by no means ruined the viewing experience, they certainly hindered the feeling of being enveloped in the world and time period of the play.

There were also occasional problems with the microphones cutting out. While this was largely owing to faulty equipment and not the students operating it, it still took away from the play and its watchability. It’s unfortunate that a largely stellar cast had to deal with poor tech; with better mics, the play could have been much more immersive.

“The mics are cutting out because they are very old and we are training new people on sound because right now it’s all seniors [working] on sound. So some inexperience might have caused that as well,” senior stage manager Kristina Mobley said.

Overall, each of the elements of the play: the cast, the crew and the set design were solid. However, these elements would have been better put to use on a different play. While it had some great moments, “The Panic Broadcast of 1938” was somewhat hard to follow and it appeared difficult for some of the actors to fully embody their characters. There were a lot of characters to keep track of, but still, at times, the stage felt a little empty.

*Madison Dieffenbach is a staff writer on the Rampage.