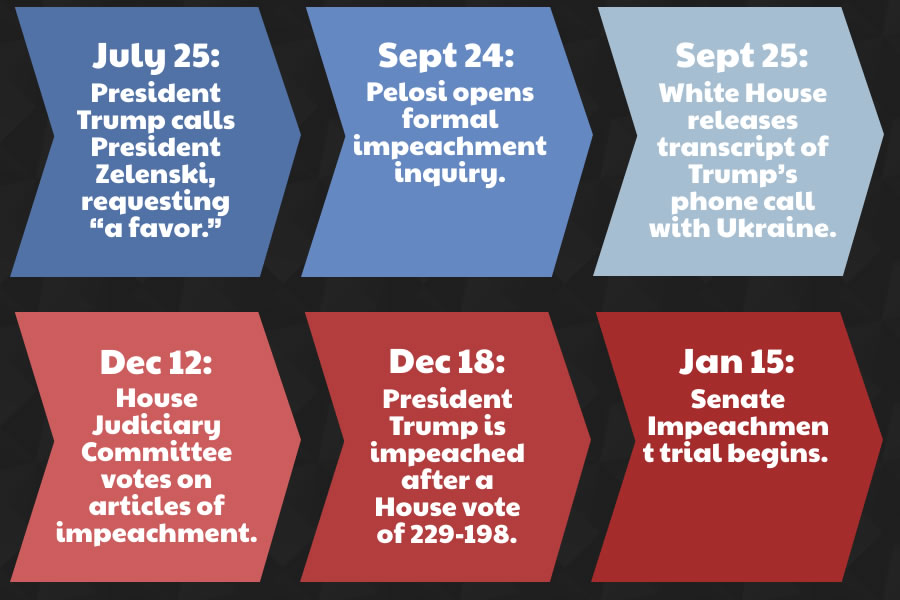 In response to the impeachment of President Donald Trump, students give their opinions on Trump and the upcoming 2020 election.

Following a Congressional impeachment inquiry into allegations that President Donald Trump threatened to withhold U.S. aid to Ukraine unless Ukrainian President Vladamir Zalinsky opened an investigation into former vice president Joe Biden’s son, Trump became the third ever president to be impeached by the House of Representatives Dec. 18.

Beyond the impeachment, there are currently 15 Democrats and three Republicans looking to unseat Trump in the 2020 presidential election.

Many RHS seniors are eligible to vote in the 2020 election, and they have strong opinions regarding impeachment. The Rampage asked three seniors of different political affiliation: conservative John DiFonzo, libertarian Aidan Lankler and liberal Iqra Mohammed their plans for voting in the 2020 election, their opinions regarding the ongoing impeachment inquiry and whether a potential impeachment would change their voting plans for 2020.

Rampage: What are your opinions about the impeachment inquiry?

DiFonzo: “If they find anything that says that the president broke the law or had any disorderly conduct of any kind, then they should follow through [with the impeachment]. I don’t think this should be political.”

Lankler: “I definitely would say it’s probably justified. In terms of the ends it’s going to lead to, I can’t say. I think it’s pretty clear that the Republicans are using this strategy of attacking the means of the impeachment inquiry, while the liberals are just doing as much as they can to try and support it.”

Mohammed: “I’m just glad it’s finally going through. I think the Democrats need to have a united goal in this, because there’s kind of a split in the party.”

R: What are your thoughts going into the 2020 election?

L: “Third parties don’t have a shot at winning the presidency, so I’m probably just going to see which democratic candidate is up.”

M: “I’m not 100% endorsing a candidate, but right now, I think I’m leaning towards Bernie, because he’s been very straightforward about his policies.”

R: How do you think the ongoing impeachment inquiry will affect the election?

D: “For conservatives, the impeachment is only going to serve to strengthen Trump’s base and that base has been with him throughout his entire presidency so far.”

L: “If it turns out poorly for the liberals and Trump ends up beating it out, it’s definitely a good platform to launch off… But if it’s successful and they’re able to come out with more details about the things Trump did, then it will probably hurt him.”