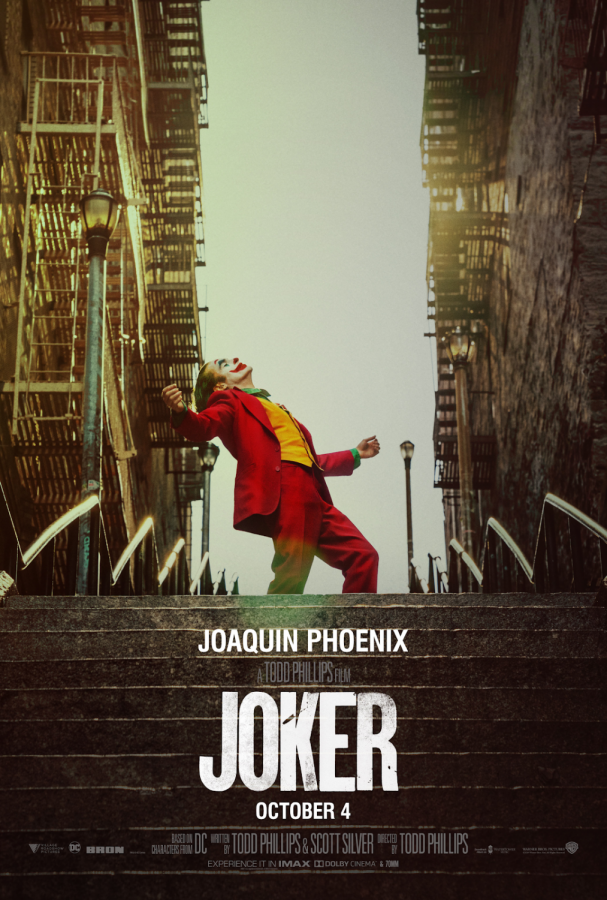 The movie is centered around Batman’s iconic arch-nemesis, Joker. “Joker” is an original, standalone fictional story, and he has not been seen before on the big screen by himself. Director Todd Phillips’ exploration of Joker portrays a man struggling to find his way in Gotham’s fractured society. A clown-for-hire by day, he aspires to be a stand-up comic at night but finds that he never seems to get the last laugh. Caught in a cynical existence between apathy and cruelty, Joker makes one wrong decision after another, bringing about a domino effect of escalating events in this gritty character study.

“It is very different from the resource material, coming into it I never really thought about the new changes that they would add and but I enjoy it nonetheless,” junior Samuel Taylor said.

These additions enhanced the Joker’s character and background and allowed Phoenix to develop it more than other actors have in past movies. Other actors like Jack Nicholson, Heath Ledger, and Jared Leto only had the main lore and basic common knowledge to recreate the clown prince of crime. However, with this movie, there is so much more depth, allowing Phoenix to recreate the jester of genocide to perfection.

Phoenix’s new interpretation of the Joker was a gritty one, to say the least, allowing the audience to feel empathy towards Joker while seeing him at his worst.

“It was very different from the source material. It added things to the Joker that I never thought of, but I really enjoyed watching it,” junior Jason Lennett said.

Joker is continuously knocked down throughout the movie, whether that is literally such as when he got jumped twice or metaphorically when both himself and the audience are to believe that his father is Thomas Wayne. However, this isn’t the case; instead, the audience finds out that Joker is adopted, was abused as a child, and his mom has been lying his whole life because of a mental illness he never knew she had. The movie is a wrecking ball of emotions as audiences watch Joker’s world crumble around him.

Phillips creates a film in which the audience can feel angry, scared, and empathetic all at the same time and about the same character.

Mental illness is also a recurring theme throughout the movie. Joker has two mental illnesses called Pseudobulbar affect (PBA) and Delusional disorder. Joker faces these illnesses and their side effects throughout the film as he laughs at inappropriate times, like when he drops a handgun at a children’s hospital or after shooting three guys who ambushed him. Sometimes in the film, Joker has smaller delusions that aren’t very important and pose no imminent threat like when he thought that he did well at his stand up comedy act even though he did very poorly. However, the delusions start to get so big and eccentric he believes that he has a girlfriend, but in fact, Joker doesn’t, instead, she was just a terrified woman who he met on an elevator.

There were parts of the movie that weren’t perfect. While the film was R-rated, it didn’t feel like an R-rated movie; it felt like a dark and gritty PG-13 movie. One of the reasons there is an R-rating in place is because of a brutal and bloody scene in which Joker murders a former co-worker using a pair of scissors. With the exception of this scene, there isn’t much blood or murder elsewhere in the movie.

Joker is a movie that is foreboding and abrasive and gets to the true central reason why Joker is the way he is. It is quite possibly one of the best versions of Joker there have been on screen.