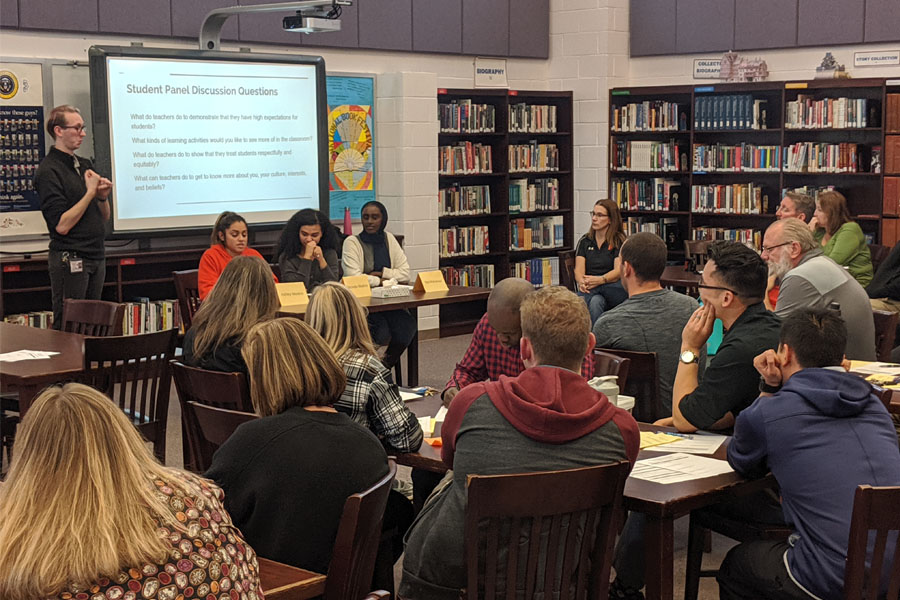 Students leaders in the Minority Scholars Program discuss questions and concerns regarding the school climate during a staff meeting Nov. 12.

To better understand student struggles, garner feedback for teachers and promote a positive school climate, the RHS staff listened to a panel of 12 seniors discuss both positive and negative experiences in school, while also offering suggestions on what faculty can do to create a more uplifting environment during the monthly staff meeting Nov. 12.

The meeting’s discussion was based around four main questions adopted from a school climate survey taken last June: what do teachers do to demonstrate that they have high expectations for students, what kinds of learning activities would you like to see more of in the classroom, what do teachers do to show that they treat students equitably and respectfully and what can teachers do to get to know more about you, your culture, interests and beliefs?

The majority of the student participants were members of the Minority Scholars Program (MSP) as the June survey revealed that most of the students who felt that they were not being treated equitably or felt like they were not entirely welcomed in school were African American and Hispanic students.

“The panel was heavy on that minority voice because that was the voice that shared in the data [from the June climate survey] that they weren’t as connected to the school and to the community as we would have liked [them to be],” assistant principal Monica Abuliak said.

Upon hearing about the meeting idea, MSP founder and co-president senior Redeat Sileshi was hesitant to participate, or have other MSP members join, as the students involved would be left vulnerable.

“My initial reaction was absolutely no, like we cannot do this, this cannot happen,” Sileshi said. “A lot of the work we do through [the] Minority Scholars Program is exactly like this, and we find that oftentimes teachers are not ready to accept certain truths that students have and certain experiences that they’ve gone through, and the conversation is usually very hostile.”

Although initially aversed, Sileshi eventually agreed and is pleased with the outcome.

“The end result was absolutely amazing. [Administration] was in tears, students were in tears, teachers were in tears. I think that everybody was crying and very emotional not out of sadness or because they were disheartened, but because there is so much bottled up emotion when it comes to race and being a minority student,” Sileshi said. “Even at Rockville, considering this is one of the most diverse, progressive spaces in MCPS, there’s a lot that hasn’t been said yet. When you finally open that bottle, it’s like everything is spilling out. It was a wonderful experience.”

Senior Iqra Mohamed, who was also part of the panel, shared her views on representation to the audience.

“I spoke on having curriculum being catered to fit the demographics of our students more, because at the end of the day, our school is so diverse and it would be such a shame to not incorporate all walks of life into what we’re learning. That way, it’s more equitable to students and we’re more inclined to learn,” Mohamed said.

The results of a staff exit card taken at the end of the presentation found that the audience thought the meeting was rewarding as well.

“This was one of the most powerful professional development trainings that [staff] has ever had because it was real, it was relevant and it was a first glimpse at what the students really think with regard to how we’re trying to move our school forward,” Abuliak said.

Despite the overwhelmingly positive response, this is the first time a meeting of this nature has been held at RHS. The meeting came as a result of the school improvement plan for the 2019-20 school year, which aims to implement “equitable and culturally responsive instructional strategies” and establish an accepting and understanding school climate and culture.

Under the school improvement plan, teachers are expected to know the demographics of the student population, know the basics of students’ cultural values, learn about implicit bias and its effect on the classroom and develop ways to establish relationships with students of different races and cultures as 71% of RHS staff is white while only 30% of the student population is, according to the RHS School Improvement Overview.