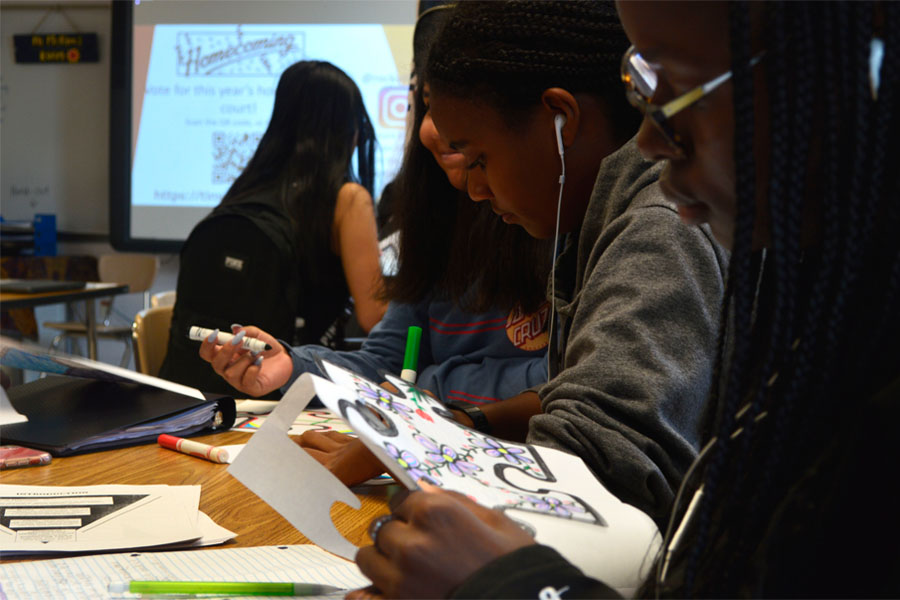 Students complete an icebreaker activity during the second weekly RockVillage advisory class. Future meetings will focus less on academics and instead, activities such as mindfulness.

To create more time for county lessons and for teachers to build better relationships with students, RHS has introduced a new advisory period, RockVillage, which went into effect Sept. 25 and is planned to continue until the end of the school year.

Conducted every Wednesday between second and third period classes, RockVillage will be covering a range of topics that are separate from the county’s curriculum, including MCPS surveys and drills.

To keep teachers from losing too much instructional learning time, a new bell schedule has been made to accomodate RockVillage.

“We found that when we tried doing some of these lessons and surveys in other ways, certain classes would get impacted more than others because not all students take the same class at the same time,” Principal Billie-Jean Bensen said. “[RockVillage as its own period] helps make sure we have a consistent time in our schedule.”

Aside from using this time to include lessons not incorporated in class, RockVillage has  assigned each student group two instructional teachers, including counselors and administrators, to create stronger student-faculty bonds.

“I think it’s really important that all teachers are a part of RockVillage. I like that every group will be guided by two adults and that we will have time to meet once a week to talk about issues that aren’t typically part of a curriculum,” staff development teacher Megan Pankiewicz said. “I’m hoping [RockVillage] will provide a time and a space for students to see teachers as a little more human and a little more vulnerable than they’re used to during classes.”

To ensure RockVillage does not create extra work for teachers, lesson plans have been provided on a Google Classroom by RHS, where instructors can pick which topic they want to teach.

“For the first couple lessons, teachers have been given a set lesson plan. Whether they choose to deviate from it or not is up to them,” Assistant Principal John Haas said. “It’s about building and creating lessons that will support students of all grade levels on things that will support their social and emotional learning.”

Because one of the key components of RockVillage is to focus on students’ well-being, like teaching mindfulness, there will be sessions that involve the discussion of more sensitive  subjects like suicide.

“A concern that has come up is how we can talk about really sensitive topics with students,” Pankiewicz said. “But honestly, that’s a skill we’re going to have to learn as a staff and we’ll need to continue to work on.”

Although RockVillage is its own period with lessons that are not part of the traditional county curriculum, it is not made to create extra work for students.

While RockVillage is a new concept to most students in the building, it is something they will eventually have to adjust to.

“I personally feel that [RockVillage] will get better as time goes on,” junior Victoria Padgett said. “Right now we are all stuck in the transition phase, so it’s weird, but it’s kind of relaxing to have a little break in between class.”