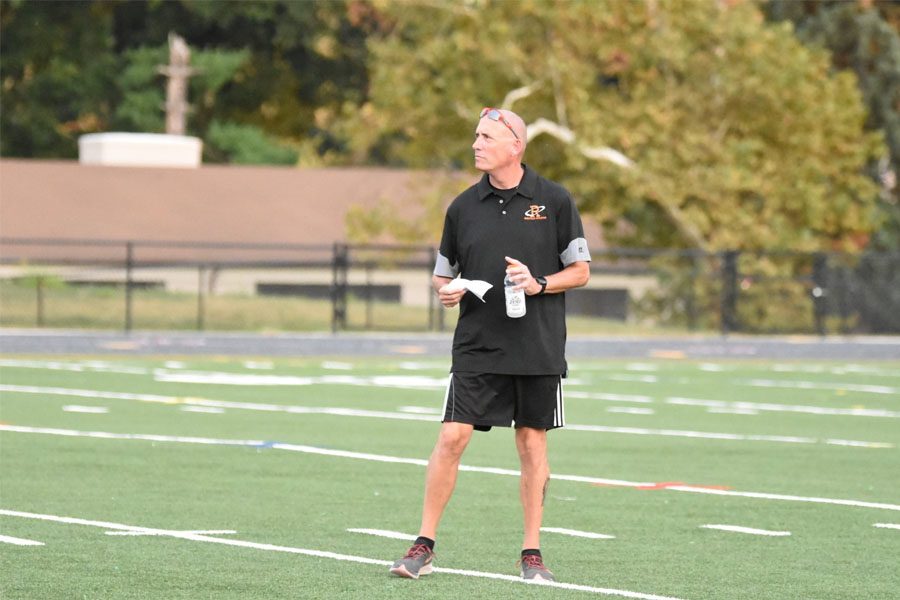 Using his 26 years of soccer and coaching experience, the new girls varsity soccer coach Neil Gottlieb coached the team to a regional championship this year.

The girls varsity soccer team, coming off of a 9-3 season last year, has recently won the regional championships after acquiring a new head coach: Neil Gottlieb, whose intriguing background and 26 years of coaching experience came in handy as they strove to maintain their previous success.

As soon as senior captain and forward Sophia Rosa met Gottlieb, she felt that he would be a positive change for the team, she said. He explained to her that his main focus was increasing purposeful ball movement rather than just kicking it blindly.

“He came in extremely prepared and confident. He was ready to take on this team with lots of faith in us in order to make our team a better program,” Rosa said.

Gottlieb was a starting goalkeeper at the University of Arizona from 1987-91. Following college, he found that coaching goalkeepers after graduating was a painless way to bring in an income and express his passion for soccer, he said. After some time, Gottlieb networked his way into coaching club teams in Arizona, Texas, North Carolina and Pennsylvania.

Outside of coaching soccer, Gottlieb keeps quite busy. He is the chief development officer of the association management company (C) Management, which manages organizations in the healthcare field.

“(C) Management has 25,000 members across the world. [It focuses on] improving patient care when they go through their cancer journey,” Gottlieb said.

He is also a U.S. Track and Field Masters runner, who at over 50 years old, is still running marathons globally. Gottlieb has earned a six star medal by running in the six major world marathons in Tokyo, Berlin, London, Boston, Chicago and New York.

Having the organization skills learned from his many business inquiries and the fitness knowledge and experience from his lengthy marathons, Gottlieb is sure that he will take the team to the top. Knowing his players’ potential, Gottlieb is confident in their capabilities and wants to make sure they utilize their skills to the best of their abilities in the future, he said.

“They are extremely talented and I don’t think they know that yet. It is my job to bring out their best talent as a team,” Gottlieb said.