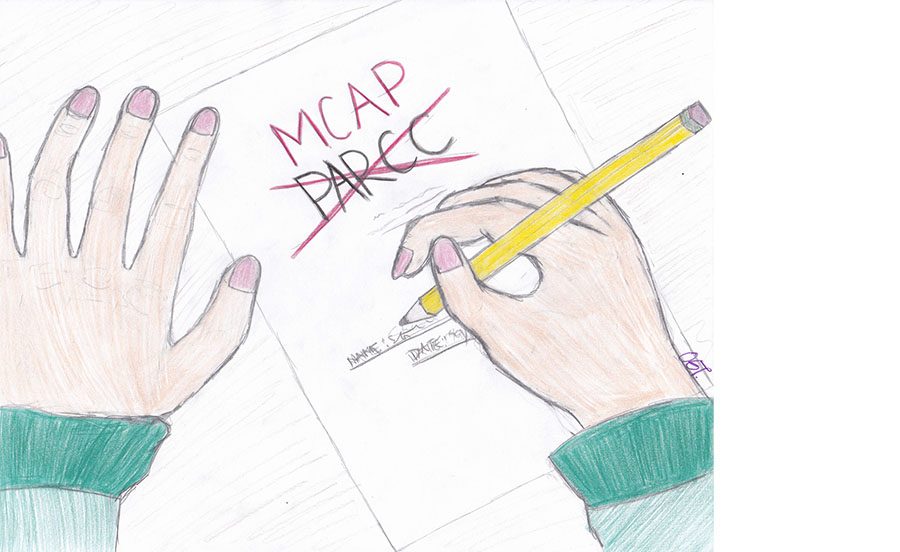 As of September 2018, MCPS has decided to drop the PARCC exam, after disapproval from many students and staff, and implement the new Maryland Comprehensive Assessment Program (MCAP) test next school year.

The goal of the MCAP is to gather information to strengthen instruction and improve student performance, according to an online letter from MCPS with updates on the new test. A key change from the PARCC to the MCAP is the speed of the test, with the MCAP being shorter.

But, replacing the PARCC, not removing it, is not the correct decision, as these standardized tests are a waste of money and time.

The MCAP and PARCC are the same test just with different names. The test material is still based off of the PARCC test, meaning the content will likely be very similar to the PARCC testing on English and math, according to the same MCPS letter.

The shortening of the tests seems to be the only substantial change, as the tests will still be given to the same grades on the same subject matter as the PARCC; it is pointless to spend millions creating and implementing a new test with such similar questions.

It also seems the greatest benefit of the PARCC–being a nationwide test– will not continue with the MCAP. When scores were being compared to other schools around the country, it highlighted some potential problems with the Maryland school system. In elementary and middle schools, only 42 percent of students showed proficiency in English language arts, and only 34 percent showed proficiency in math when compared to other states that took the test. The numbers are worse for high school as English 10 and Algebra 1 scores have recently dropped with 42 percent and 31 percent passing the respective exams, according to an August 28, 2018 Washington Post article. With the MCAP only being taken in Maryland, it will not be possible to effectively compare scores with other states and make changes to policy based on gathered data.

The test will still be a waste of time for students and staff, adding extra stress to the end of the year. Many students do not try their hardest on standardized tests, but for those who do, the tests take a lot of effort with minimal benefits. Teachers are losing instructional time and being forced to administer this test at the end of the year when students have exams and other, more important tests. It is unfair to teachers and students to go through the standardized testing process.

MCPS should stop forcing its students to take standardized tests that waste class time. There haven’t been any substantial improvements to student learning from data gathered from these tests; in fact the PARCC showed many schools in Maryland are not getting their students where they need to be in order to graduate high school and pursue a higher education.

Despite Maryland trying to improve testing by creating their own, it needs to start doing what is best for students, and save them from the grind of standardized tests.