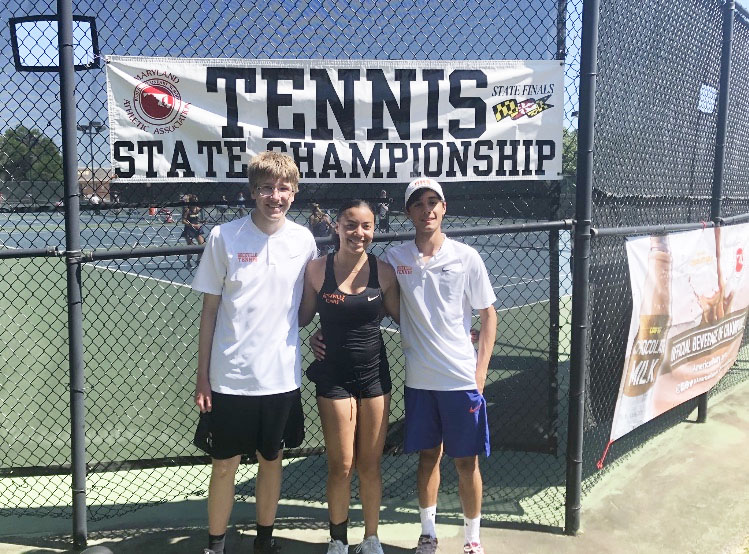 Playing against Laura Feckova from Great Mills High School (HS), Suchinsky won in straight sets, winning 6–0 and 6–1. Similarly, Mirzai and Piliptchak defeated Danny Ho and Ryan Huang from Centennial HS 6–2 in the first set and 6–1 in the second.

“It felt great winning because it was something that not many people get to achieve in high school,” Piliptchak said. “I also felt pretty relieved toward the end of it because I knew Sania would have a pretty easy time winning her match, so having the double victory was nice as well.”

Though the pressure and intensity of a state championship match affected each of the players, they were able to overcome their nerves and perform at a competitive level.

“At the very beginning I started to feel the pressure. I had never played in front of that many people in my life,” Suchinsky said. “I knew that there was a lot of people rooting for me and expecting me to win and I didn’t want to let them down.”

For Piliptchak, the pressure of the state championship was amplified knowing that regardless of the result, it would be his final high school match.

“While I was playing, I tried to get the nervousness out of me. I just kept focusing on my shots and doing everything we were doing until it was all over,” Piliptchak said. “It did feel a little more special because it was my last season; it was a nice high end point.”

With his doubles partner graduating, Mirzai looked ahead, considering what he will have to do next season to continue being successful.

“Next season, I’m looking to go even harder by training more and to get stronger, hoping I can win the championship for singles,” Mirzai said.

For Suchinsky on the other hand, as a freshman, winning this year’s championship was only the beginning.

“I wish to hopefully win states all four years. Since I went undefeated this season, there is a little more pressure on me to do well these next three years,” Suchinsky said. “I am just going to have to trust my skills and not overlook any of my opponents that I face next season so I can do the same next year.”