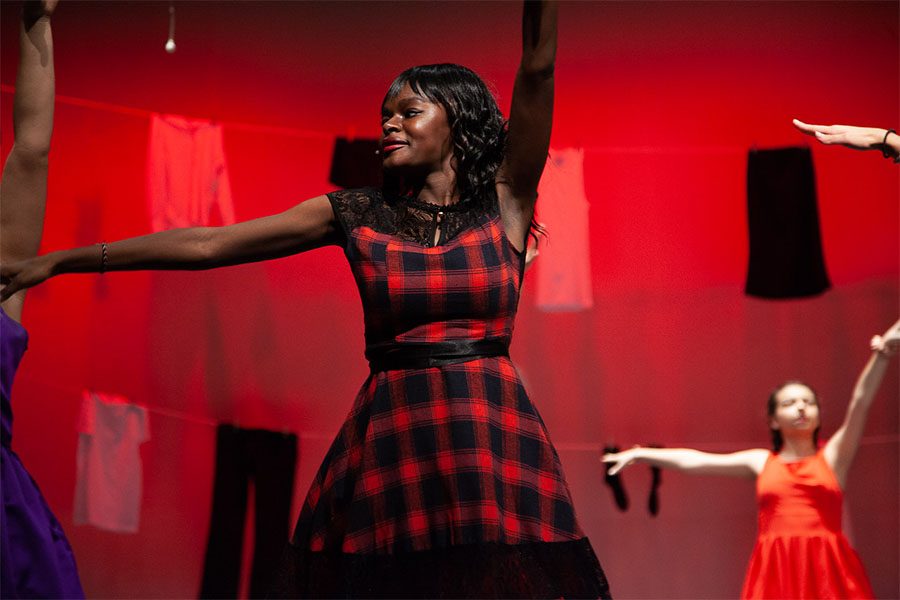 Sophomore Donna Mbulaiteye performs in the spring musical "West Side Story." She has been writing music not only for herself but also for her friends.

Some people do yoga, some box and others simply keep a diary to express their feelings, hopes and opinions, but sophomore Donna Mbulaiteye (pronounced em-bly-tay) has found another unique way to express herself: writing music.

However, the music she writes is not just for herself, but for others as well. Mbulaiteye found that writing songs about how she feels has helped her release a lot of emotional buildup and decided to do the same for her friends.

“I wanted to transform messages into musical pieces of art,” Mbulaiteye said.

However, she has only shared some of the songs about her experiences and a couple others with those closest to her.

“I like to write songs for my friends about situations they were or are going through, too, and it usually helps which is fulfilling and a pretty good feeling,” Mbulaiteye said.

Mbulaiteye wrote a song for her friend, sophomore Alyssa Anderson, when Anderson was going through a rough time. Anderson had told Mbulaiteye about what she was experiencing and Mbulaiteye sent her a song about it days later.

“It comforted, empowered and calmed me. It helped me move on from the situation. It was really touching,” Anderson said.

Along with writing songs to comfort her friends, Mbulaiteye also performs in a lot of school events such as plays, coffee houses and the RHS annual talent show.

She has been performing live since the fifth grade when she performed as part of a trio at a chorus concert at Lucy V. Barnsley Elementary School and has since performed in Parkland Magnet Middle School for Aerospace Technology and RHS plays such as “Grease,” “Shrek,” “Spamalot” and “West Side Story.” She enjoys taking on another role because she can commit to be someone else other than herself.

“It’s easier to do it when you have sort of a persona that you’re portraying than doing it when you’re yourself,” Mbulaiteye said.

“I just need to put my thoughts and feelings about situations on paper, sort it out myself so I stop overthinking about it, and then I box it away. It’s like my own closure and understanding of many things,” Mbulaiteye said.