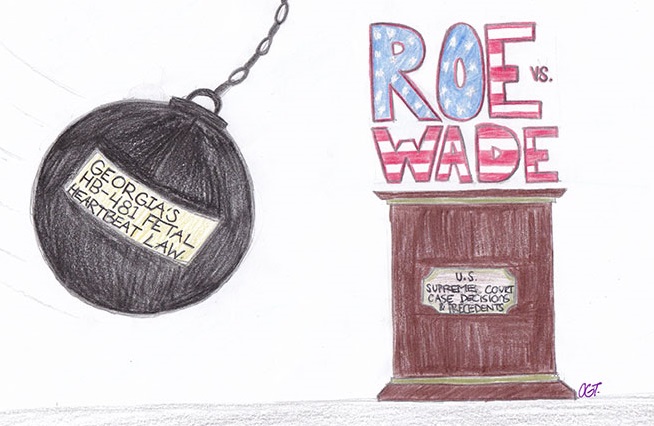 Georgia’s HB-481 bill recently signed into law by Gov. Brian Kemp, will make it illegal for any woman to get an abortion after a fetal heartbeat can be detected in the womb. The signing of the law has caused an uproar among women’s rights advocates and pro-choice groups.

The new law significantly decreases the timeframe in which a woman can have an abortion, currently set at 20 weeks. It also establishes a penalty of up to 10 years in prison for women who perform their own abortions and could lead to murder charges for women who have abortions, though others contend that the consequences are unclear.

Every woman should be able to determine if, when, how and with whom to start a family, as reproductive freedom is an essential right. Womens’ posterity and overall future should not be determined by government legislators; it should be a woman’s choice. Period. Women and teenage girls in Maryland should also be concerned about this issue because these same restrictions, if not stopped, could eventually be placed upon them federally.

Georgia’s “Fetal Heartbeat Law,” violates the precedent established in the landmark Supreme Court case Roe v. Wade, which recognized a woman’s right to an abortion until a fetus is viable outside the womb, usually around 24 weeks into a pregnancy.

Research has found that restrictions on abortions have grave consequences for women including being more likely to live in poverty, to receive public assistance, to raise children alone, to be in a violent relationship and to be less likely to have full time employment when compared to women with access to abortions, according to a study conducted by The Bixby Center for Global Reproductive Health.

Within the past month, Georgia, Alabama, Ohio and Mississippi, all states with governors who are either men or Republican Christians, have passed bills limiting abortions. Women are getting very little representation in Georgia, with legislators being approximately 26 percent female, while women make up a little more than 51 percent of the population, according to the United States Census Bureau.

Not only do these laws threaten the women within the respective states, but they also send a dangerous message to females everywhere, including in left-leaning states like Maryland.

The intention of the bill’s writers was to create a law that could be used to overturn Roe vs. Wade, according to groups including the American Civil Liberties Union (ACLU) and Planned Parenthood who that argue that it strips women of their constitutional rights. These same groups have vowed to challenge the bill in court. The precedent established in Roe vs. Wade applies to the entire nation, so if overturned, there could be grave consequences for all females.

Many pro-life advocates believe that this law is a good piece of legislation that protects the innocent who are unable to speak for themselves. Kemp believes that this law protects the innocent and champions the vulnerable, while standing up for those who can’t speak for themselves, according to an interview with USA Today. They say there is evidence of human life before birth as the foundation for their argument.

This doesn’t change that the ‘Fetal Heartbeat Law’ is a violation of women’s basic rights and punishes them for the choices they make about their own bodies. Yes, the arguments the pro-lifers make are valid; however, it should not be up to the government to determine what women may or may not do with their pregnancies. The argument against abortion is often rooted in the religious belief that life begins at conception, which violates the separation of church and state.

There are several ways that people, not just women, can get involved in the effort to protect reproductive rights. People can volunteer for groups such as the ACLU and Planned Parenthood that have been on the front lines of fighting this cause for women nationally. It is important that teens join these groups and learn more about the cause; the plight of women in other states; and get involved in helping shape the conversation so it’s more about women and less about religion’s beliefs.

In 2019, it is shocking that bills like this are being signed, let alone passed in state houses. These laws are incredibly disparaging of women’s basic human rights. If anything, women should at least be included in the debate that concerns their right to their own bodies, more representation needs to be incorporated into these discussions in order to fairly protect every woman’s rights.