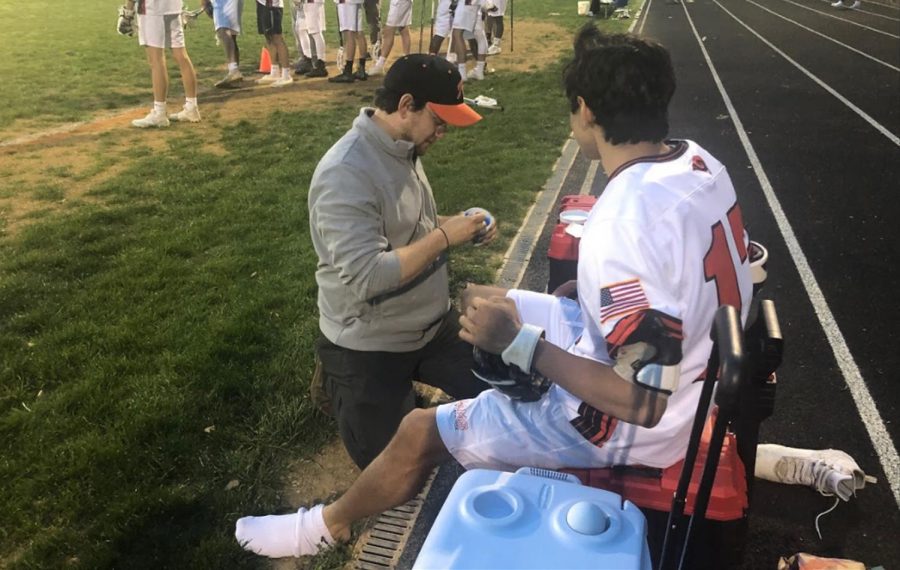 Like most high school seniors, when Robert Kambies graduated from RHS in 2009 he was content with the idea that he might never be back.  But six years later he was back, this time at every home sports game as Rockville’s certified athletic trainer.

He has the same set up each night, sitting on the sidelines with his cooler and three supplies boxes, ready to help any player who comes to him with an injury.  Yet despite always being around, Kambies has managed to remain relatively unknown and in the background — just the way he likes it, he says — and most students really only know him as the trainer who rides in on his motorcycle at 2:30 p.m. each day.

“I really never saw myself working here [at RHS],” Kambies said.  “But, about a year after I graduated from Towson, a guy who I went to college with told me about the job and well, here I am.  It’s okay though, because I’m not really out there with all the teachers, I’m usually just in my office.”

In 2009, MCPS began requiring that all 25 high schools in the county have an assigned  certified athletic trainer employed by a health care vendor available at all practices and games.  Kambies is hired through Adventist Hospital and contracted to RHS after school, so he spends his mornings at a wellness clinic working with various patients including stroke victims, a quadriplegic and a man with alzheimer’s.

“It’s all the way more severe stuff,” Kambies said.  “Going from seeing a quadriplegic guy to working with sports is very different.  It’s made me almost numb to all the injuries I see here. So, I’m like, ‘Oh, a popped out shoulder?  That’s nothing.’”

Adventist requires that Kambies spend between 25 and 30 hours a week at RHS, so he typically arrives right at dismissal and will stay until all practices or games have ended.  Most of the work he does is rehabilitation-based; students will come to his office after school complaining of pain and then he diagnoses it and guides them through rehab until they can get back to playing.

When a serious injury occurs during practice or a game, Kambies is responsible for providing immediate care and staying with the athlete until an ambulance arrives.  In the case of a concussion, he is responsible for overseeing the athlete in their completion of the graduated return to play program and then officially clearing them to play again.

What Kambies finds most rewarding about working at RHS, is the change he sees in students as they get older and begin to take their injuries more seriously.

“Kids will come into me freshman year and think they’re all tough and don’t want to tell me their injuries.  But, then once they slowly get to know me, they’re more adamant about coming in and dealing with their injuries early on so they don’t become a real issue,” Kambies said.

Senior Jeffrey Gomez is a regular to Kambies’ office during football and basketball seasons. In his four years at RHS, he has gotten to know Kambies fairly well, often chatting with him as he gets stretched out before practice.

“What a lot of people don’t realize is that he [Kambies] is actually a pretty interesting guy,” Gomez said.  “Sometimes we talk about his motorcycles — he’s been riding since he was really young — and he’s taught me how to lift properly so I’m ready for college.”

Kambies said that the end-goal for most people is to become a trainer at the college or professional level.  But that requires traveling with the team and can be very busy, which he learned while working with Towson’s football team in college, taking time away from his other two hobbies: riding his motorcycle and rock-climbing.

Instead, he plans to move to the Northwest with his long-time girlfriend where he will hopefully open his own wellness center and have time to explore the mountains and forests on his motorcycle.  But for now, as much as he hates to admit it, he’s happy being back at his alma mater, he said.